Is a Jew obligated to rescue a non-Jew?

"...OUR RELATION WITH A GENTILE IS NOT BASED ON LOVE" 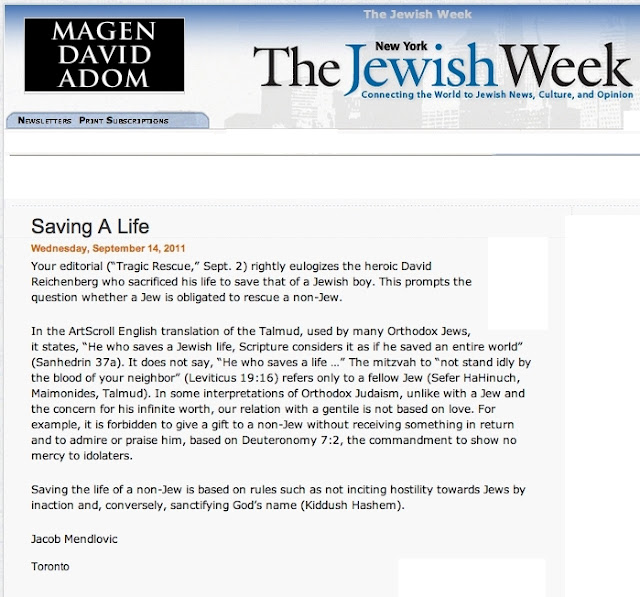 This letter to the editor is from The Jewish Week newspaper of New York.

The author, Mr. Jacob Mendlovic, errs when he unfairly insinuates blame for some of Judaism's evil view of gentiles on the Old Testament (Leviticus 19:16 and Deuteronomy 7:2), when in fact the evil stems from the Talmudic and rabbinic distortion of the Bible. He nevertheless offers a generally truthful and refreshing exposé of the relentless media and academic Big Lie that Judaism is a tolerant humanist religion consisting of love for all.

The lie in recent times has been given its greatest impetus by Steven Spielberg's falsification in his famous "Holocaust" movie, "Schindler's List," of a Talmud passage in Sanhedrin 37a about saving lives as a means for saving the entire world (cf. Judaism Discovered, pp. 526-528). In "Schindler's List" the Talmud passage is made to read, "Whoever saves one life, saves the entire world." In actuality, as Mr. Mendlovic notes in his letter, the uncensored Sanhedrin 37a states, "He who saves a Jewish life, it is as if he saved the entire world."

Mr. Mendlovic then proceeds to note the reality of Judaism's bigoted exclusivity, citing Maimonides, who University of Chicago Prof. Joel L. Kraemer calls "one of civilization's greatest minds." Maimonides limits the followers of Orthodox Judaism to the rescue only of "fellow Jews.”

In his last paragraph Mendlovic makes the tactical point that where the rescue of non-Jews is recommended it is done only from a fear of inciting hostility (among gentiles). The objective of maintaining power, prestige and reputation within gentile-dominated society is sometimes grouped under the general heading of Kiddush Hashem (sanctifying God's name); the "god" in this case being the Judaic people themselves.

Where Judaic Talmudists are supreme however, such as in occupied Palestine (counterfeit "Israel"), the demands of Judaism's savvy public relations do not require saving the life of a "non-Jew." (Cf. Judaism's Strange Gods, pp. 269-272).

Mr. Mendlovic's other error is to qualify his correct statement concerning the adherents of Orthodox Judaism, “our relation with a gentile is not based on love," by attributing it only to "some interpretations of Orthodox Judaism." Perhaps he chose to err on the side of caution by offering this qualification. The truth however is that contempt for the gentile is a root dogma of Orthodox Judaism and forms the core teachings of Chazal ("Chachameinu Zichronam Livrocho": the authoritative "sages" of the Talmud who are superior to God; cf. Judaism's Strange Gods, pp. 112-116).

Interesting coincidence of sorts is how the letter is dated September 14th, a day set aside in the Roman Catholic Church to exalt the Holy Cross, the instrument of salvation, a salvation freely offered to Jews and gentiles alike.

Happy New year Michael and ,once again my sincere respect for a work you do.
Few days ago I received a book from Poland printed in 1920 by A.Niemojewski "Dusza zydowska w zwierciadle Talmudu" "Jewish soul in Talmud mirror".
I hope we will be able to present the English translation as soon as possible.

95% of Germany's '30s Nazis were Christians. America annihilated their own brothers.
The Nazi's crime was to disallow Jewish leadership in government.
America ought to take up the banner and restrict American Jews to business in private sector.
"Separate Banks from Government; if you want to survive."

The Nazis crime was to persecute and murder Judaic people for the “offense" of being born Judaic. Many of these targeted Judaics had served patriotically in World War I in the German army. Many of these Judaics had repudiated the Talmud and the religion of Judaism and were admirers of German culture. But Hitler’s occult-fueled philosophy viewed the Judaic soul as being inherently corrupt. Therefore Judaics in general had to be extruded and/or killed. Goebbels was a driving force toward that end.

Yes, most Germans were Christians and under the dictatorship of Nazism they lost their right to vote Hitler and the NSDAP out of office.

The Germans themselves became targets of genocide through fire bombing by Roosevelt and Churchill. After the war millions of additional Germans were “genocided" by Stalin, Tito and the mostly Judaic Communists like Jacob Berman who ran post-war Poland.

Does it really need to be said that Nazism is no kind of template for how America ought to conduct its private business sector? Unless one favors a system driven by occultism, i.e. reverse rabbinism; unless one seeks to bring another fire “storm” down upon our people’s heads.

Do we ever contemplate the symbolic invocation present in the word “storm" as in stormtrooper? The Nazis invoked a storm of self-destruction. Shall we invoke another, or was World War II a lesson we should never forget?

There is a Nazi Party and a Nazi army on earth today. Today’s Nazi party is called by various names such as the Likud and Shas and the Nazi army is misnamed the Israeli Defense Force (IDF).

When will the demon of Nazi/rabbinic race hate be exorcized?

"When will the demon of Nazi/rabbinic race hate be exorcized?"

You seem to be the only one asking this important question in this particular way, and it's changed the way I think about geopolitics in general. Those who think they can solve the I/P conflict without looking into the Talmudic-sanctioned hatred of non-Jewish humanity are missing the point. Without the implacable hatred for the rest of mankind (Gibbon wrote well about this), the Israeli Zionist machine would run out of gas. The hatred is pointless and anti-human and un-holy and needs to stop, lest it destroy every damned thing, including the Zionists themselves.

I have been what most people would identify as a Rabbi, and taught into this life since the age of seven, although I was born into the Karaite sect which opposes, or originally opposed all things from the Rabbinate. The absolute bottom line in this question is this; the sons of Jacob, of which I am one, were saved and set on a course for one reason and one reason only. The mandate which was ignored quickly then, and remains ignored, was to LEARN and LIVE His ORIGINAL instructions, and THEN to TEACH all the nations of The Eternal One's ORIGINAL and very MINIMAL Torah instructions. i.e. a light on a hill.

This, as well as all their post Babylonian Talmudic additions are exactly what Yeshiyeh-(Jesus) taught on and rebuked about, just as all of our prophets have done.
They have hidden all truths to consolidate their power under their Will. "I hate YOUR Sabbaths, YOUR feasts and YOUR new moon days".. He did NOT say He hated His...Again, exactly what Yehshiyeh taught.