Editor's note: Bishop Richard Williamson's "Eleison Comments" column, grounded in Scripture and the position of the Catholic Church for one thousand nine hundred sixty-five years (until the Second Vatican Council), was published in On the Contrary on Oct. 14 ("How Can Pope Benedict Let Go of Ancient Truths?"). With the usual chutzpah, the Conference of European Rabbis is demanding today that the Catholic pope condemn a Catholic bishop for preaching Catholic truth.

When is the pope going to call on Judaics to condemn murderous, racist rabbis for preaching Talmudic lies?

We support Bishop Williamson's right to publicly preach the Gospel of Jesus Christ! 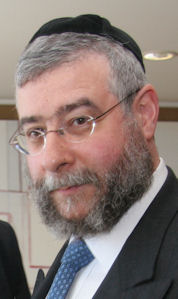 BERLIN (Jewish Telegraph Agency) -- A group of European rabbis has called on the pope to condemn the latest anti-Semitic remarks by a Holocaust-denying Catholic bishop.

The Brussels-based Conference of European Rabbis slammed comments by Catholic Bishop Richard Williamson in which he allegedly blamed Jews for deicide. Williamson, a member of the radical Catholic Pius Brotherhood sect, reportedly made the comments in the latest issue of his newsletter, “The Eleison Comments." He has  been living in London.

“Comments like these take us back decades to the dark days before there was a meaningful and mutually respectful dialogue between Jews and Roman Catholics,” conference President Chief Rabbi Pinchas Goldschmidt of Moscow said in a statement issued Wednesday.

Goldschmidt called for the Church to "suspend negotiations with extremist Catholic tendencies until it is clear that these groups show a clear commitment to tackling anti-Semitism within their ranks."

In his newsletter, Williamson wrote that “only the Jews were the primary agents of the deicide because Pontius Pilate would never have condemned Jesus if the Jews had not asked for blood.”

Williamson was found guilty of Holocaust denial in Germany in 2010 and fined about $14,000. He has previously denied the existence of gas chambers and the murder of 6 million Jews during the Holocaust.

In 2009, Pope Benedict XVI lifted the excommunication against Williamson, but the Vatican also reportedly declared that "in order to be admitted to episcopal functions within the Church, (he) will have to take his distance, in an absolutely unequivocal and public fashion, from his position on the Shoah, which the Holy Father was not aware of when the excommunication was lifted."

During meetings with Pope Benedict in Berlin last month, German Jewish leader Dieter Graumann said that one of the issues that troubled Jewish-Catholic relations was the Church's refusal to condemn Williamson.

In his statement Wednesday, Goldschmidt said the pope "has shown a commitment to fostering a spirit of positive dialogue with Jews both before and during his papacy. But he must clearly show that there is no room in the Catholic Church for purveyors of hate."

An outrage, but not a surprise, given the disgraceful and scandalous Judaization of Holy Mother Church. This insidious and nefarious Judaizing has been in process since and because of the genuinely Satanic Second Vatican Council. And precious little has been done by the supposed defenders of the Faith to reverse, halt, or even mitigate the spread and effects of the toxin.

"A group of European rabbis has called on the pope to condemn the latest anti-Semitic remarks by a Holocaust-denying Catholic bishop." What gross impertinence! Jews should be calling on the Holy Father to do one thing and one thing only -- to allow them, for the sake of their salvation, entry into the one and only Church founded by Jesus Christ Himself.

Thank you, God, for Bp. Williamson!

Let us pray ever more fervently for the conversion of the rabbi "subsisting in" the Chair of Peter.

rejected Him 1 Kings 8:7
forsaken Him 1 Kings 8:8
served strange gods 1 Kings 8:8
hast not kept the commandments of the Lord 1 Kings 13:13
forsaken the commandments of God 3 Kings 18:18
mocked the messengers of God 2 Paralipomenon 36:16
despised God’s Word 2 Paralipomenon 36:16
misused the prophets 2 Paralipomenon 36:16
provoked God to wrath 2 Esdras 9:26
departed from God 2 Esdras 9:26
threw God’s law behind their backs 2 Esdras 9:26
killed the prophets, who admonished them earnestly to return to God 2 Esdras 9:26
guilty of great blasphemies 2 Esdras 9:26
forsaken the Lord Isaias 65:11
forgotten His holy mountain ( the commandments from Mt. Sinai) Isaias 65:11
didn't listen to Him Isaias 65:11
did evil Isaias 65:11
didn't answer Him Isaias 65:11
chosen the things that displease God Isaias 65:11
forsake God Jeremias 2:13
made up their own religion "that holds no water" Jeremias 2:13
had not done God's work Ezekiel 20:23
cast off His laws Ezekiel 20:23
their eyes were after the idols of their fathers Ezekiel 20:23
defiled Israel with idols Ezekiel 36:16ff
profaned His Holy Name Ezekiel 36:16ff
lying pen of the scribes wrote falsehood Jeremias 8:7ff
they all dealt deceitfully Jeremias 8:10
they voided the Covenant Jeremias 31:31-32
sacrificed to idols Jeremias 44:23
not walked in His law Jeremias 44:23
disobeyed God's commandments Jeremias 44:23
disobeyed God's Law Baruch 2:10
the people of Israel will deny the Messiah Daniel 9:25ff
no truth in Israel Osee 4:1-2
no mercy in Israel Osee 4:1-2
no knowledge of God in Israel Osee 4:1-2
sacrificed to Baalim and other idols Osee 11:2
He hates their festivities, sacrifices, and songs Amos 5:20-24
covetous in all the Israelites Amos 9:1
departed from the Law Malachias 2:8-12
made void the Covenant Malachias 2:8-12
not kept God's ways Malachias 2:8-12
despised their brothers Malachias 2:8-12
committed abominations Malachias 2:8-12
profaned the holiness of the Lord Malachias 2:8-12
married the daughter of strange gods Malachias 2:8-12