Yom Kippur—the western world will watch in awe as sins are transferred to a chicken. 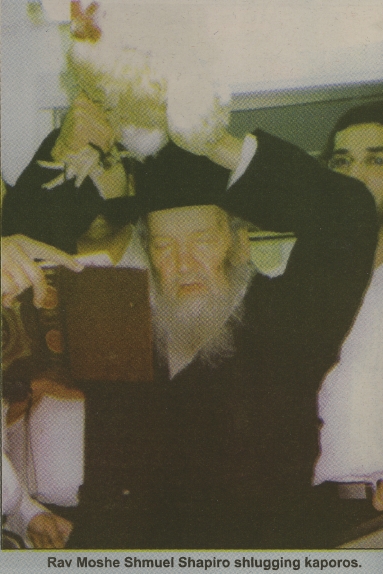 It's called kaparot. It doesn't fit the misty, gauzy, Spielbergian image of Orthodox Talmudism. Talmudists shlugging (twirling) a chicken over their heads in the belief that by reciting the Mahzor prayers while doing so, they are transferring their sins to the chicken. In charity, let us pray for those deluded into these anti-Scriptural traditions in the name of the Bible.

Kaparot is the pre-Yom Kippur superstition that the media report cosmetically—usually omitting the twirling and the belief in sin transference to the unfortunate fowl. In 2011 China's news agency, in covering the kaparot rites in Jerusalem, reduced them to nothing more than "the symbolic slaughter of chickens as an act of atonement." The kaparot ritual is a patently anti-Biblical rite.
Kol Nidrei

After the kaparot concludes, the deeply troubling Kol Nidrei ceremony commences, almost always explained to the outside world as a blessed ritual of begging God for forgiveness for oaths that were violated, contracts that were broken, and promises that were not kept in the past year.

The trouble is, that pious claim is disinformation.

"And one who desires that his vows not be upheld for the entire year should stand at the New Year and say: "Any vow that I take in the future should be void. And this statement is effective, provided that he remembers at the time of the vow that his intent at the beginning of the year was to render it void."
—The Babylonian Talmud, tractate Nedarim 23b
This is the censored, don't-you-dare-mention-it, actual law governing Yom Kippur's Kol Nidrei rite, and it's one reason why Yom Kippur is the best-attended of all annual synagogue ceremonies. Why should  a researcher who provides these facts from the documentary record be subject to character assassination?
Of course the halacha from the Talmud Bavli is an embarrassment, and we can understand why some would feel it necessary to falsify it, but their intent is misplaced. The falsification weaves a tangled web of deceit, obstructs the advancement of knowledge, and leads to futile wrangling and heated disputations about the actual halachic foundation of Kol Nidrei which detract from respectful dialogue and communal good will. If we care deeply about education, then it follows that scholars who disinter evidence which authenticates facts at variance with devout pieties, should be defended when targeted with obloquy and cancellation.
Admittedly all of humanity, whether Judaic or gentile, are prone to behaving unethically. There is no special dishonesty in any ethnicity, though the New York Times has had the chutzpah to single out members of the Shiite Islamic faith as being prone to lying:

“Complicating matters further, some analysts say that Ayatollah Khamenei’s denial of Iranian nuclear ambitions has to be seen as part of a Shiite historical concept called taqiyya, or religious dissembling. For centuries an oppressed minority within Islam, Shiites learned to conceal their sectarian identity to survive, and so there is a precedent for lying to protect the Shiite community.”

— James Risen, “Seeking Nuclear Insight in Fog of the Ayatollah’s Utterances,” New York Times, April 14, 2012, page A4 (emphasis supplied). This was a news report, not an opinion piece or editorial.
It seems that every autumn, highly inaccurate information portraying the rite as utterly benign, while grossly misrepresenting its content, is propagated with distressing uniformity throughout the corporate media. A prime example of that imposture appeared in the Wall Street Journal on page C5 of the Saturday, September 24, edition, titled, "The Meaning of a Yom Kippur Prayer":

"...Many Jews who do not attend synagogue regularly make sure to be present for the evening prayer service that marks the start of Yom Kippur, when worshipers recite Kol Nidrei, perhaps the most famous passage in Jewish liturgy—and one of the least understood...As the Day of Atonement approached, many Jews were aware that they might have impetuously uttered vows for which God would call them to account. They therefore gathered in the synagogue right before the onset of the holiday to seek the dissolution of these vows, publicly declaring that all vows taken in the past year should be dissolved.

"...Medieval rabbis were summoned to the courts of kings and accused, in public debate, of communal dishonesty. Jewish sages responded to such charges by explaining, accurately and honestly, that legal dissolution of vows applied only to promises to God and that agreements with human beings could not be dissolved....rabbinic tradition makes clear that repentance before God does not undo misdeeds against another human being..." (emphasis supplied; read more at wsj.com)

Woe to any insufficiently reverent scholar who dares to offer contrary data about Kol Nidrei. The reputational and career consequences can be severe.

The act of telling the truth by citing the relevant halachos from the Gemara concerning Yom Kippur's Kol Nidrei ritual, is almost always hysterically denounced as an act of hatred.
The sleuth who excavates the rabbinic law governing Kol Nidrei becomes a pariah, guilty of a "loathsome anti-semitic canard," or an "anti-semitic calumny." This accusation is hurled in the expectation that researchers will be intimidated into silence, and the public, being unable to know where to find contradictory documentation, will instead accept at face value the word of the American "news" media.

By standing for the truth in the face of persecution, those who love Judaic people are helping to compassionately liberate them from practices that are harmful to everyone, both in mind and spirit.
To go along with the disinformation about kaparot and Kol Nidrei is the real "anti-Semitic" act harmful to Judaics. Veritas is always preferred to self-delusion, and knowledge to obfuscation.


Historian Michael Hoffman is the author of Judaism Discovered and nine other books. He is a former reporter for the New York bureau of the Associated Press and the editor of the periodical, Revisionist History®.
www.RevisionistHistory.org

If this appalling quasi-druidic ceremony is a "loathsome antisemitic canard" (despite the irrefutable evidence to the contrary), then how reliable is the adamant and hysterical claim that "The Protocols of the Learned Elders of Zion" is a nonsensical and outrageous forgery? Hmmm. Intriguing.

Abraham was not satanic, nor did he commit child sexual abuse. Black on black violence is hardly "survival." You are playing the rabbis' game when you call all jews violent. What a ridiculous post.

It's clear that the author of this piece knows NOTHING about the nature of Yom Kippur or Kapparos. You apply labels without understanding anything, but of course, that is typical and standard practice for those who hate the Jews.

Your criticism is without substance. Tell us where you think we are wrong or how we have erred, don’t simply pontificate.

As for the “Jew haters,” those will be found among the followers of Chazal and the Talmud Bavli who oppress and regiment Judaic persons with thousands of useless, harmful and destructive rules.

Those who love Judaics seek to liberate them from this slavery.

Hey Michael Hoffman,...Excellent Post, I see the JIDF has arrived with their spurious argumentative bluster.

So the excuse is "legal dissolution of vows applied only to promises to God and that agreements with human beings could not be dissolved". Makes a lot of sense that one would need to lie to God!