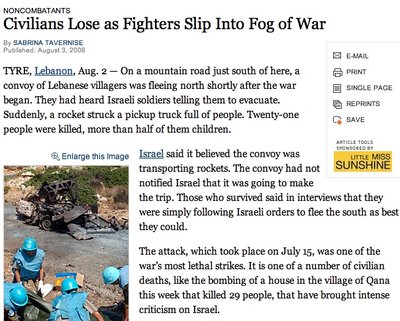 In an article ostensibly oozing sympathy for civilians in Lebanon, we caught the NY Times lowering the death toll for Sunday's Israeli massacre in Qana, to 29 (see the last sentence in the screenshot above, taken from the Times's website on the evening of Aug. 2 PDT).

Authorities in Lebanon have said that the death toll in Qana was at least 57-60, with dozens of children killed. But the newspaper of record is doing damage control for the Israeli killers by arbitrarily lowering the number of their victims.

How is the NY Times able, on Aug. 2, a mere three days after the bombing in Qana, to arrive at a total number of deaths at Qana at 29? The Times does not say "an estimated" 29. It fixes the figure at 29 without qualification or reference to its revisionist source. In other words, this is "history" by New York Times fiat. This is the zionist mentality.

Has the Times sent a forensics team to Qana?

I think not. I think we are seeing the maufacture of history, holocaust-denial, and tampering with the documentary record, before our very eyes.

Something similar happened twelve years ago, in the wake of Baruch Goldstein's massacre at the mosque in Hebron on Purim, 1994. The 40 Palestinians he killed magically became 29 in the US media, and that phony figure has been the official death toll in Goldstein's massacre ever since.

The Israeli invasion of Lebanon "has killed more than 900 people and wounded 3,000, with a third of the casualties children under 12, Lebanese Prime Minister Fouad Siniora said in a video message to the Organization of the Islamic Conference in Malaysia." [Reuters, Aug. 3. 8:33 a.m. EDT].

Perhaps it was because there were only 28 (or 29 as the NY Times noted) that actually died in the death toll. According to cnn (http://edition.cnn.com/2006/WORLD/meast/08/02/qana.inquiries/) a number of people escaped the bombing incident. Or would you now say that Human Rights Watch, hardly a friend of Israel, is now "covering up" the incident. (See the HRW release at http://edition.cnn.com/2006/WORLD/meast/08/02/qana.inquiries/)

Unfortunately, after perusing your postings, it appears that you are a deluded, misinformed person. Fortunately, the 1st Amendment protects you, though there are times I wish it would not.

Which i must add is nothing new for the author of this blog. all the information he reads that fits with his theory is true and factual, while all other information is false and a cover-up. of course.

he claims that 'authorities' in lebanon fix the amount at 50-60 while he blasts the NY times for not putting a name to their figures. (I'm sure if the NYT said 'authorities', he would be blasting that too.) yet he has no problem posting up quotes on this site from who knows where and stating them as gospel (pun intended)

the sad fact is that while the author claims to search for the truth, his site is mainly a springboard for anti-semitic diatribe. there is little mention of any other group here. at least the folks at jew watch state it like it is. not this 'revisionist' junk which really means 'anti-jew'. so much for this qquote from the main page:
Revisionist history consists in the art of discerning fraud and the courage to publicly strip illusion, even when the whole world is clamoring violently for it.

yup truth is what they are looking for. and it starts with their name. or shall i say lack of it.

I also enjoy the author's public (if that is what you call this blog which is barely read) show of ignorance as he tries to apply ancient talmudic texts without a proper understanding of their meaning.

take the new post about jewish lives. I wonder what the muslims religion has to say about infidels and the christians about the heathens or about non-christians for example during the crusades. apparently a jew's life is worth less in the 'killing fields' of haifa. and ideservedly so, since israelis love killing people and starting wars. thats why they started this one with hezbolla. gosh darn it they tempted hezbolla by allowing israeli soldiers to guard israel's own borders! which country does that? its all israels fault. its all the jews fault. a refrain we've heard many times before and will hear many times in the future.

whats interesting is that the author fails to acknowledge the very fact that will be his undoing. for thousands of years there are those who try to eradicate and destroy the jews and the torah, while we are still around and will continue to remain around in the future. he is wasting his life in a futile endeavor.

oh, but of course, I'm just one of the zionist/israeli crazies trying to sway world opinion and taunting a righteous and straight fellow while he takes on a noble cause. its one big conspiracy. there, I came out with it. you can now publish talmudic 'sources' as admitting that there is a conspiracy. there's your next headline