US War Crime / Holocaust in Tokyo 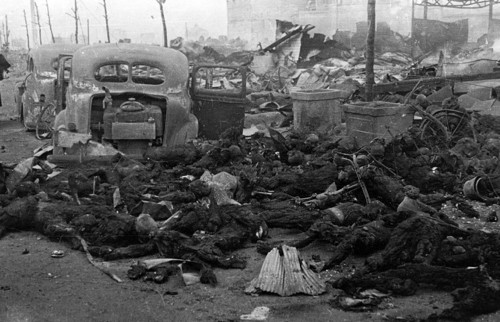 76 years ago in Tokyo, Japan, more people were burned alive in a few hours than  is estimated ever occurred in recorded history.

But this dictionary-definition holocaust will barely be reported in the media. When it is, it’s almost always accompanied by the justification that the incineration of Tokyo, like the atomic bombing of Hiroshima and Nagasaki, “shortened the war” making a “costly invasion by US troops” unnecessary. It’s always nice to know that there are good, justifiable reasons for mass murder through barbecuing civilians.

President Franklin Roosevelt ordered General Curtis Lemay to implement LeMay's plan of attack on civilians in Japan. On March 9 346 American bombers were dispatched to intentionally create a firestorm holocaust that would wipe out 16 square miles of the city of Toyko, burning alive 100,000 Japanese children, women and men.

From the U.S. government’s own Strategic Bombing Survey, we read this astounding admission:

“Probably more persons lost their lives by fire at Tokyo in a 6-hour period than any time in the history of man.” 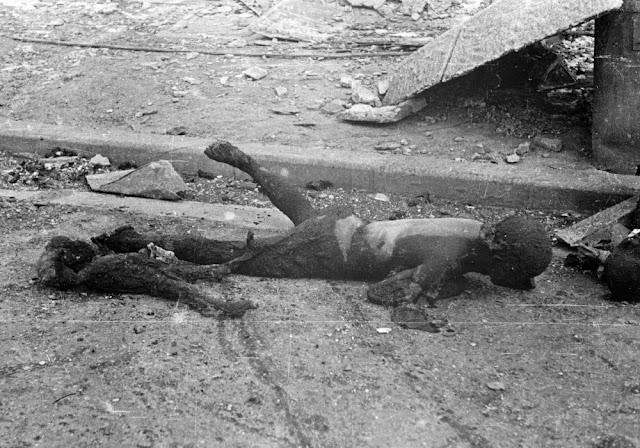 The remains of a Japanese mother and her infant after United States Army Air Force incendiary bombing, Tokyo, March, 1945.

But the media refuses to call it a Holocaust. There’s a monopoly on that word. Are not other victims deserving of the holocaust designation, particularly since it specifically denotes death by fire?

Yet the fact is, you’re not supposed to recall this epic crime against Japanese humanity, except perhaps in a kind of vague haze: “Oh yeah, didn't something happen to Tokyo—didn’t we bomb it before we bombed Hiroshima, saving a lot of American lives by sparing our troops an invasion of the mainland?”

Do you think Wahhabist Muslim terrorists are unaware of this American mass murder logic?

What about the Chinese Communists?

We reap what we sow.

The U.S. government commits only good war crimes against civilians. We envelop our mass murders in a soft amnesia, whereby they are only partly recalled, surrounded by self-serving alibis reeking of venality and callous indifference to the loss of non-American human life.

Compare the non-existent memorials to what even the US government’s Strategic Bombing Survey terms the worst incineration of humans in history, in Tokyo, with the Auschwitz death camp commemorations, beginning in April. Actually, there’s no comparison. One is a footnote and the other is the cosmic crime of all time.

Michael Hoffman is the author of nine books of history and literature, including The Israeli Holocaust Against the Palestinians. Michael’s Truth Mission and this Hoffman Wire column are made possible by donations from readers

From Jone's Moral Theology: "A city may be bombarded in time of war even though many innocent people will lose their lives."

It's interesting to learn about the history of the Dominicans and moral theology & how "Christians" went from turning the other cheek to widespread support of crime and war. Most Catholics don't know their own history of heresies and crime starting with Augustine through the Frankish papacy, to Aquinas, and finally to Liguori. They're too blinded with the externals of religion and worldly living. The priests teach the laity to use all kinds of lawyer terms such as material and formal cooperation in sin.

The "just war" concept comes from Thomas Aquinas who "Traditional Catholics" hold up as one of the greatest saints and that if you criticize him you must be a Modernist. Catholics don't want to admit that they became a dead branch many centuries ago and that Aquinas and Liguori were never in the true church. Once you're cut off, there's no council or change that can save you. Your only hope is to find a true bishop and receive baptism and the sacraments from someone who has maintained the true faith all along. These would be the bishops who weren't taken in by the Frankish errors.

I was agreeing with you until you lumped Aquinas in with Liguori, the diabolic advocate of lying and deceit. I don't see the parallels whatsoever.

As for just war, without it we have only pacifism. The Apostle Paul said the ruler bears not the sword in vain. The Roman centurion received Jesus's highest praise.

The "traditional Catholic" theologian Jone was quite a piece of work. His magnum opus was reprinted by Tan Books. In it you will find permission for a husband to sodomize his wife.

Liguori built on the work of Augustine and Aquinas. In Aquinas's Summa (though possibly written by others), you'll also find perverted teachings, such as when a woman is on her period, she is required to "render the marriage debt" (a disgusting phrase that is still used in Traditional Catholicism) if her husband demands it, but in the same situation a woman is forbidden from requesting the same of her husband.

Liguori could not have written what he did without building on the foundation of Augustine and Aquinas. Moral theology wasn't a subject until the 11th century, so without prior moral theologians (some far worse than Liguori), his writings wouldn't have been possible. In your book on the Renaissance Church of Rome, I don't believe you mentioned the numerous Summas that were floating around prior to Liguori (e.g. Summa de Poenitentia of St. Raymond of Peñafort), so the practices he followed had long been the norm. Liguori just happened to be the most popular moral theologian by 1870, where he remained until Vatican II. A deeper assessment would look back to why moral theology was created in the first place and how it began to be used to teach evil. I'm guessing it had something to do with the evil popes of the 9th and 10th centuries.

The rot in the Catholic Church started before the Renaissance. The Frankish papacy and Dominican Order did a lot of damage.

I do not mean to be disrespectful, but this is an absurd, nay utterly moronic, point of view. Ever hear of Pearl Harbor? You know, how the Japs started the war. Ever hear of Nanking? Manchuria? You know, how the Japs systematically raped and butchered millions of Chinese and Koreans as part of an elaborate plan of pure sadism and blood lust. I suggest you study your history before imbecilic comments on “poor” Japs being burned alive. Whatever the number burned in Tokyo in March 1945, it was fully deserved. God bless the U.S Air Force for teaching the Japs, and the Germans (with the fire bombings of Hamburg and Dresden, etc, in the dying days of the war) ... for teaching them a little taste of getting their own medicine. Given the Japs cruelty towards others in their insane racial supremacism, a few nukes should have been dropped on Tokyo. Truman and his gang were too much of gentlemen. With such barbarians, one must resort to some degree of barbarism.

Unknown may be a troll, but I've heard this line of thinking in person. I've heard "traditional Catholics" defend the nuclear bombs dropped on Japan (utilitarianism). I've heard people say we should've killed everyone in Vietnam. There are some Americans that are absolute warmongers who would defend the US military in nearly (or possibly all) cases. Remember the warmongers who went mad over the Dixie Chicks saying they were ashamed Bush was from Texas?

Christians are to turn the other cheek, not exact revenge on a huge scale. I'd say most "conservatives" and "Traditional Catholics" would give lip service to the teaching, but then would use Aquinas or Liguori in order to defend slaughter of hundreds of thousands of civilians. It's the same logic that leads to defending the execution of heretics and the crusades.

You could argue Pearl Harbor is the result of Matthew Perry and his gunboat diplomacy. None of this excuses any behavior since we are not to exact revenge, even if evil is wrongly done to us. We're supposed to love our enemies and those that hate us.

A Christian cannot in any way support the US military. Anyone who does is either wildly ignorant or is bloodthirsty themselves since there's no way to see the US military as a force for good.

Regarding Anonymous -- It's true that the Japanese committed countless atrocities in China against the Chinese. However, Gen. Marshall enabled Gen. Stilwell to thwart and undermine Chiang Kai shek at several junctures, making it almost impossible for Chiang to keep supplies ready to hand, to keep northern China free of Soviet and/or communist control, and, ultimately, to vanquish the Japanese. The Davies group, a group of Ivy-league communist sympathizers under Stilwell and Marshall, played footsies with Chou Enlai and other communists throughout the war, making recommendations and providing evaluations that favored the communists to the detriment of the Nationalists. When the war was over, Marshall withheld needed military and financial aid from Chiang Kai-shek, at one point refusing moth-balled rifles to the Nationalists. He was eventually forced to ship them to the Nationalists. They arrived with their bolts and firing pins removed. Marshall, with the blessings of Dean Acheson, proposed the creation of a "Red West Point" to train and arm the communists. Because communist sympathizers like Marshall and Stilwell betrayed the Nationalist cause, they left the Chinese people at the mercy of the Japanese.