The Forbidden Truth:  Cancel Culture and the ADL’s Witch Hunt Against Authors 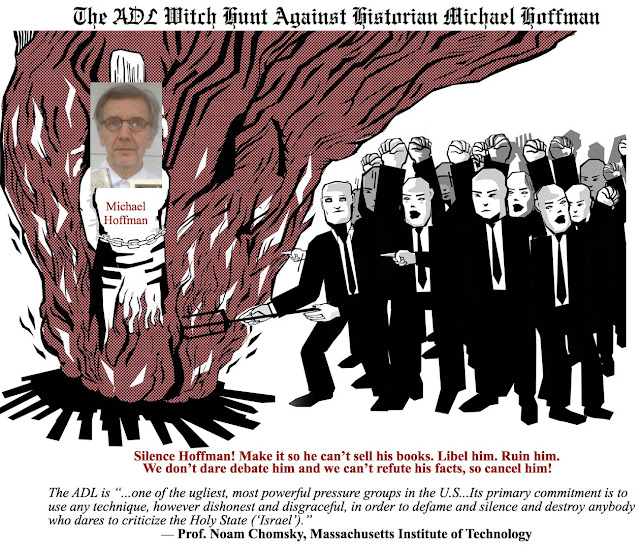 How far will cancel culture go to prevent this writer from selling my books?

How long will the ADL (Anti-Defamation League of B'nai B'rith) get away with libeling this writer by claiming that I am anything other than pro-Semitic and pro-Judaic, or that I deny that during the Second World War innocent Judaic people suffered mass murder at the hands of the criminal Nazis and their criminal ideology?

The ADL retails demonstrable falsehoods. Their credibility should be zero, but fear makes it otherwise.

How much longer will the white supremacists at the ADL send U.S. police forces to the Israeli state to learn brutal tactics employed against Palestinian civilians, which are then applied to black people in the U.S.?

How long will Judaic people be captive to Zionism and Talmudism?

Why is it a thought crime to critically study the tenets of the Talmud Bavli?

Why is such study not a legitimate intellectual undertaking for the advancement of human knowledge?

Why must all such studies be demonized? Why can't we speak and write freely on controversial subjects with love and compassion?

Why does the ADL work night and day to interdict the sale of my books? I have a standing offer to the ADL's researchers to either debate, or publish a refutation of my book-length theses line by line. If I am wrong, I will stand corrected. Demonstrate my errors with reason and data.

On the contrary, the ADL works assiduously to pressure corporations to deny me the ability to sell my books  and impoverish this writer so that I can no longer research and write. How do such underhanded tactics benefit humanity, or the people's right to know? I am opposed to hatred and extremism, including Israeli and Talmudic extremism and hate speech. Why can't this be discussed on social media?

What does this have to do with Craig Heimbichner, as of this writing, an official with the California Department of Education?

Mr. Heimbicher has been suspended and may be terminated in part because our printing house published his book, Blood on the Altar, a seminal study of the secret society known as the Ordo Templi Orientis.

In the course of remarking on Craig's case, according to the Sacramento Bee newspaper of February 25, an ADL spokesman said:

"Heimbichner’s association with Hoffman put him on the Anti-Defamation League’s radar more than a decade ago, said Aryeh Tuchman, the ADL’s senior associate director..."

The ADL spokesman is referring to their domestic espionage apparatus, which spies on American authors in order to defame those who write contra racist Israeli dispossession of the Palestinians and hate speech in the Talmud Bavli. Why should my scholarship make me a target of spying? As a Christian believer I am opposed to all forms of violence and extremism, as I publicly counsel. For instance, to counter the neo-Nazi movement in the United States I wrote the book, Adolf Hitler: Enemy of the German People.

My volume, Usury in Christendom: The Mortal Sin that Was and Now is Not contains a section documenting the scapegoating of Judaic people in the Renaissance for the usurious activities of German and Italian papalist banking. The ADL does not make that fact known to the public or the corporations that it pressures to cancel this writer.

As a historian I follow the data wherever it leads. Hitler was a scourge of humanity, and usury was massively instituted first by members of the Church of Rome, not Judaic persons. That is the truth of the documentary record and any historian worthy of the name bears witness to it.

The ninth commandment of the God I adore  —  the God of Israel  —  states: "Thou shalt not bear false witness" (Exodus 20:16). The ADL has massively borne false witness against this writer and many other dissident scholars.

One target of their witch hunt, Noam Chomsky, distinguished Institute Professor at M.I.T., said it best when he wrote that the ADL is “...one of the ugliest, most powerful pressure groups in the U.S...Its primary commitment is to use any technique, however dishonest and disgraceful, in order to defame and silence and destroy anybody who dares to criticize the Holy State (‘Israel’)."

When will Americans risk taking a stand for the freedom of scholars to write, and for their opponents to refute them by debate and dialogue in the free marketplace of ideas, rather than smears, repression and censorship?