Will Freemason Albert Pike’s Statue be Removed in Washington D.C? 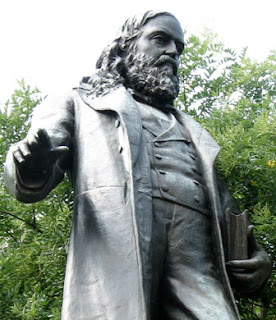 In the Soviet-like frenzy to erase historical memory and generate amnesia, Nancy Pelosi’s Congress is hellbent on pulverizing the remembrance of things past.

The move is on to raze every statue to a Confederate in Washington D.C., which begs the question, will Albert Pike’s monument also fall?

Pike was a Confederate general and the Supreme Commander of the Scottish Rite of Freemasonry Southern Jurisdiction, the most powerful masonic organization on earth.

Hundreds of thousands of whites were (and are) his disciples.

His statue in our nation's capitol honors Satanism, which probably means that the diabolic U.S. Congress, recognizing a fellow-traveler, might leave it untouched, even while it razes other statues.

Our proposal: keep Pike’s monument intact. Place a plaque prominently next to it containing the statement: "This statue to a masonic Satanist testifies to the hold a powerful secret society has exerted over our nation.”

Freemasonry is Kabbalism for Goyim

Revisionist history reveals that Kabbalism was first infiltrated into the West in "Catholic" Florence in the late 15th century. You will search in vain for a Renaissance or post-Renaissance papal encyclical condemning it. Pope Leo XIII's famous denunciation of Masonry carefully avoided Kabbalah, which is tantamount to writing about the origin of the automobile without mentioning the internal combustion engine.

From Pico della Mirandola to Cardinal Henri de Lubac, for more than five hundred years the Church of Rome has been the deep cover center for Kabbalism among the goyim.

Pike's satanic Freemasonry was ancillary fungus, generated by a far deeper, papal rot. Natural slaves (see Aristotle's tripartite division of humanity), will never be able to handle these radical truths. True sons and daughters of Augustine, Aquinas and Dante, will.

Read The Occult Renaissance Church of Rome for the documentation.
___________

Time permitting, and I believe it will, I am going to discuss this blog article today on my call-in talk radio show (from 1-1:55pm pacific). Call-in number is 410.848.9191 if you or anyone would like to call and comment.

Truth seekers can go to LibertyWorksRadioNetwork(dot)com to listen or download the app.

If the "Church of Rome" has been the "deep cover center for Kabbalism" for over 500 years, then where has Christ's Holy Church been for the last 500 years? He said that it would be visible to the end of time.

Wherever there is the Mass, Sacraments and validly ordained priests, there is His Church.

None of those were negatively affected until the 1970s.

Catholic people and parish priests were unaware of the occult beliefs of the post-Renaissance pontiffs and hierarchy.

The secret only began to be evident to non-experts from the 1960s onward. These facts are brought out in the first 90 pages of my book “The Occult Renaissance Church of Rome.” You can read the first section of the book free of charge here:
https://a.co/hOXQCD5

Well said, Mike, i heard you with Kevin Barrett a few months, back, the burning of Dresden it was excellent you're a true Patriot a Patrick Henry, today!

https://www.youtube.com/watch?time_continue=157&v=n-WnY_ZmT9E&feature=emb_logo
That link is an excerpt from an early Fritz Lang film, Dr. Mabuse. I sense there is a conjuring of demons which has a Satanic quality. Masonry and organized crime are surely synonymous.

McKinley, Truman 33rd Mason, Woodrow Wilson let Zionist steal Palestine wete all in the Kkk, secretly while being president, yet Truman has statues in Isreal & St Louis, no call for removal????