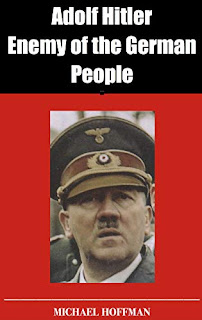 Adolf Hitler: Enemy of the German People was published in softcover on September 1 and none of the revisionist institutes, organizations and magazines seeking to rehabilitate the Hitler hologram have vouchsafed to review it, until now.

Other than a couple of less than stellar two-line attacks at Amazon terming it “Garbage, garbage….” it has otherwise been given the infamous silent treatment, which has also been the fate of The Occult Renaissance Church of Rome, which “conservative” and “traditional Catholic” intellectuals cannot refute and are hoping will fade into the woodwork. (You will note that this is the tactic of Zionist media when confronting books at radical variance with their own world view).

On Oct. 31, at the website, Counter-Currents Publishing, a writer with the byline “P.J. Collins” ventured a quick dismissal of Hitler Enemy of the German People. You can read the critique here:
https://www.counter-currents.com/2019/10/fake-hitlers-on-parade/

Counter-Currents has also published a reply from this writer, in the comments section following the “review” on their website.

Here below is that reply (the book can be purchased at this link).

The insouciance with which the reviewer greets the murder of Gregor Strasser—the casual dismissal of a great crime with profoundly negative consequences for Germany, is representative of other iniquities, for example, Hitler’s betrayal of the anti-usury platform that helped elect him, and his mass suicide operation in Russia—that are blithely mentioned and then dismissed with indifference to the facts.

Moreover, outside the corpus of the "review" itself, P. J. Collins offers the following in a rejoinder to a comment:

I have never said any such thing. I refer in Adolf Hitler: Enemy of the German People to the "Molech of the Soviet Union," and acknowledge Stalin's horrendous crimes.

"The reason the rank-and-file populace gave Hitler a pass on such excesses as the Night of Long Knives, is that the NatSocs crushed the communist menace. That wasn’t a side worry but the central issue. Hoffman knows this, but is giving us sophistry to buttress the rest of his argument."

This claim of clairvoyant knowledge is always noteworthy. It is reminiscent of the mind-readers who say that they "know" that WWII revisionists do indeed believe in the homicidal gas chambers of Auschwitz, and are "denying" them out of sheer perversity.

According to documents related to the ascendance of the NSDAP and Hitler's popularity prior to his gaining rule, the "central worry" for the German people was the Money Power, as weaponized by usury, including by "Aryan" banks. I document how Hitler turned his coat in this matter after he achieved power. I don't "give sophistry" to prove this. There are facts in my book for those who actually wish to cite or debate them, rather than issue a quick, sarcastic dismissal.

The murder of Gregor Strasser and other innocents was not mere "excess." Hitler killed dozens over the course of the "Night," some guilty, many innocent, and all without due process of any kind, not even a show trial having been accorded them. Hitler demonstrated that he was the law. How can anyone regard Hitler's murderous dictatorship as only excessive? What he did to Gregor and the others was a harbinger and template of what this "gambler at the map table" would do to millions of Germans with his grotesque incompetence and magical thinking. 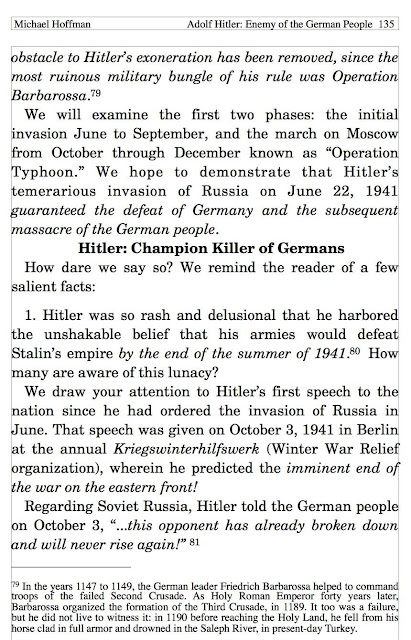 Which part of this history she you a revisionist? The preemptive attack on Russia was necessary supported by declassified documents in the 1990s

Regarding Hitler, we know that he and the other top-Nazi's (Himmler, Goering, etc.), had a kind of Satanic religion. So, they were not as innocent as is claimed by some. And that Hitler was a murderer, is also true. Regarding Hitler's invasion of the Soviet Union, however, it must be clearly stated that he had just two choices: To sit idly by and to allow Stalin to conquer Germany (and after that West-Europe), or (2, to strike first; Hitler decided to choose the last option. And so, it becomes clear that Hitler's mass suicide operation was forced upon him by Stalin (and not to forget by his ally, Roosevelt who armed the last one).

If — and I emphasize if — the hypothesis that Stalin was going to imminently attempt to sustain a projection of an enormous military invasion force across the vast Soviet territory between Moscow and the German border, is indeed correct, a wise German leader would have done to Stalin’s forces what Stalin did to Hitler’s — allow the wobbly supply lines, the incredible distances, the non-existent roads, the Russian winter, and the insurmountable difficulties for quartermaster generals of supplying an army, to defeat the Reds, spearheaded by a German soldiery and Luftwaffe fighting near their supplies and transport.

The argument that seeks to exculpate Hitler of his mass suicide “Operation Barbarossa” rests upon the claim that he was compelled by circumstances to wage an offensive war against a presumptive attack by the USSR, and that such a war was the only war he could have waged under the circumstances.

This contention violates every principle of military strategy. The fact is, had he a Carl Von Clausewitz on his staff, he would have been informed that the German military, fighting a two-front war already (in western Europe and Britain, and in Africa), could not overcome the Soviet empire over the distances involved. Though the Germans killed vast numbers of Russians in 1941, vast numbers were available for replacement, whereas the German “Ostheer” that invaded Russia and suffered 180,000 killed just in the first three months, and kept losing ever more in the months ahead, had very few replacements. By January 1942 that army would never be seen again. Only an ever-dwindling ghost of itself would be available.

In my book I quote the sources that show that Hitler’s generals who were in charge of supplying the Ostheer, stated to him by the end of 1941, that the army could no longer be adequately supplied, the war was lost, and all that was left was a holding action awaiting the potential development of the super weapons. This Masada-like catastrophe had occurred six months after Hitler ordered the invasion!

Great Britain is 94,000 square miles. The European portion of the former Soviet Union is almost as large as the continental United States. If the Hitler regime (HR) could not, (or would not) occupy Great Britain, how could it occupy the Soviet Union?
If HR had concentrated on defeating Britain, it would have controlled North Africa, had access to all the oil of the Middle East and Nigeria, India would have been Japanese, French Indochina would have been Indo-Japan, and the Dolomites and Tyrolian Alps probably would have been ceded back to the Reich. Granted, HR would probably have fought guerrilla wars in Poland, Greece and Yugoslavia for many years.
If the U.S. armed forces had entered the war after the defeat of Great Britain, it could have bombed German forces and cities only from aircraft carrier groups (vulnerable to U-boats, even if stationed out of range of the Luftwaffe), from Iceland in summer, and possibly from the Azores, if seized from neutral Portugal. If neutral Ireland had allowed American forces to be stationed there, Germany would have acted. Ditto for Spain.

In the Winter War between the Soviet Union and Finland, December 1939 to Mid-March 1940, the Soviets sustained nearly four hundred thousand casualties in a war that lasted three and a half months! After such a pyrrhic "victory" against tiny Finland, the Soviets would have been further decimated fighting against the Germans if they had tried to invade central Europe and Germany.