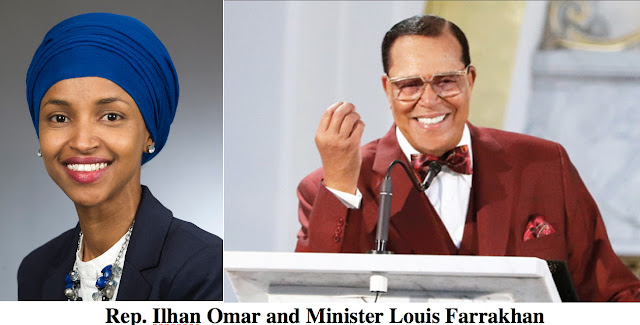 At the end of February Somali-American Rep. Ilhan Omar (D.-MN) reiterated her concerns about Congressional allegiance to the foreign Israeli nation. Now Congress is considering her condemnation, led by Democrats from her own party.

There is much to disagree with in Rep. Omar’s domestic policies, but her views on the oppression of the Palestinians with US taxpayer support, and the malicious influence of the Israeli lobby in recruiting and seducing a Congress that has repeatedly put the Israeli agenda ahead of that of America (for instance, the U.S. war with Iraq was not for oil, it was for the Israelis) — is a revolutionary and welcome development.

In 2018 the women’s movement that helped elect Omar to Congress was ordered by Zionists and Talmudists to repudiate Louis Farrakhan due to his public exposure of the Talmud’s pornographic slurs against Jesus. In my speech to Mr. Farrakhan’s Nation of Islam in Chicago on Feb. 17 of this year, I asked, “When will the adherents of the Orthodox religion of Judaism be called upon to repudiate the racism and hatred in the Talmud? You can watch a one minute clip of that portion of my speech at this link.

Fact: Black people in America are in the lead in asking long suppressed questions about Israeli influence over American politics and the media.

Fact: The love and respect this writer was accorded in Chicago is like nothing I’ve experienced in my lifetime. They repeatedly called me a man of courage and gave me honorary titles of “doctor" and “professor.” Their love was palpable. Some negative force has been keeping us from building an alliance with black people and indeed learning from them.

To those who say we have nothing to learn, I ask, what exactly is your white community doing to defend the Holy name of Jesus Christ against Talmudic blasphemy?

All I have seen of communities of conservative whites is a demand that we stop Sharia law from taking over America. These hypnotics imagine we are ruled by Islamic law. Their ignorance is abysmal. We are actually ruled by Halacha (Talmudic law) not Sharia, but few dare say so out of fear of the repercussions which Rep. Omar is suffering now, and Minister Farrakhan has endured for the past thirty years.

I am weary of losing to the perpetui inimici. I am weary of Talmudic hate speech and halachic rule over America never making it onto the airwaves of Tucker Carlson, Hannity or in the pages of the “conservative" journals and websites. Blasphemy against the Holy Name has been rendered into marginalia.

Both the blasphemy of Christ’s name and the halachic subversion of our government, culture and media are “side issues” among Right wing whites because, despite being trained at Hillsdale College or some other “bastion” of “Christian” education, they are mis-educated. They have not received a classical education whatsoever. As we pointed out in Revisionist History issue no. 92, “Conservatives” timidly recoil from confronting the fount of the oldest institutionalized character assassination of our heritage—the Talmudic mentality. Western Civilization cannot be separated from its heritage of challenging Talmudic Judaism without fatally weakening the West. This is our condition at present: fatally weakened —  for this very reason.

When will Hillsdale College teach that England’s renowned Chief Justice Edward Coke decreed in 1608 that Christians could never be permitted to be slaves of Judaic masters for the reason that the Judaics blaspheme the name of Jesus? The Chief Justice wrote: Judeo Christianum nullum serviat mancipium, nefas enim est quem, Christus redemit blasphemum, Christi in servitutis vinculis detinere. (77 Eng. Rep. 397).

Coke’s words were English statute law, mother to the laws of America, woven into the fabric of our authentic western civilization, and yet rendered invisible by chicken-livered “Conservatives” who crusade like big shots against Farrakhan, the only American leader who has a large national following (other than Chuck Baldwin and Texe Marrs), who has the testicular fortitude to take Edward Coke at his word.

When there was a western civilization worth its salt, the protection of that Name that is above all Names, was paramount. Now it is a “side issue” for 99% of all "conservative” politicians, journalists, priests, pastors and ministers in the United States, Canada, Australia, Britain and Europe.

In 2019 every Christian in America is held in servitude to the blasphemers of Jesus Christ.

Earlier this week Speaker of the House Nancy Pelosi was contacted by the Zionist lobby and told to arrange for the Congressional condemnation of Somali-American Rep. Omar after she questioned loyalty to a foreign power above loyalty to America. Yesterday the New York Times reported that this condemnation was about to be enacted until the Congressional Black Caucus stood up and said no.
Representative Ayanna Pressley, Democrat of Massachusetts, said she told leadership that there must be “equity in our outrage,” noting that Ms. Omar, a Minnesotan and one of the first two Muslim women elected to Congress, was being attacked for her faith. “Islamophobia needs to be included” in the anti-Semitism resolution, she told reporters on Wednesday. “We need to denounce all forms of hate. There is no hierarchy of hurt.”
The closed-door meeting, the weekly gathering of House Democrats at the Capitol, generally involves discussion of the legislative agenda and political strategy. Instead, according to multiple people present, it turned into a gripe session over the treatment of Ms. Omar by her own party.
“What would be the appropriate level of punishment — a public flogging?” Representative Raúl Grijalva of Arizona, the chairman of the House Natural Resources Committee, asked in an interview after the meeting.  “...there is a double standard we have to be aware of. The level of condemnation on Ms. Omar has been really intense.”
The resolution began as a response to Ms. Omar’s suggestion last week that pro-Israel activists were pushing “for allegiance to a foreign country,” a remark that her critics say played into the anti-Semitic trope of “dual loyalty.”
Representatives Eliot L. Engel and Nita M. Lowey — both New Yorkers who lead powerful committees — and other Jewish lawmakers discussed the comment over the weekend, bringing in Ms. Pelosi and Mr. Hoyer; by Tuesday, a resolution condemning anti-Semitism was circulating on Capitol Hill, surprising lawmakers who had not heard about it.
By Tuesday night, with members of the Congressional Black Caucus and the Congressional Progressive Caucus pushing back, it became clear to Ms. Pelosi that the measure would have to be rewritten….
Pelosi explodes
Representative Jahana Hayes, a Connecticut Democrat who is black, told Ms. Pelosi that she had “put us in a bad position,” and complained that she had learned of the resolution by watching television. As Ms. Pelosi was responding, Ms. Hayes began digging around in her purse; Ms. Pelosi, thinking Ms. Hayes was talking to another lawmaker in the room, grew visibly irritated, according to a second person present. (End quote from the NY Times. Read more at nytimes.com)
Notice Rep. Pressley’s words, "There is no hierarchy of hurt.” Whoa! This is a direct hit on the Talmudic concept that Judaic people are morally superior to everyone else and always occupy the highest position in the victim hierarchy.
Minister Louis Farrakhan continues to lead in efforts to fully apprise black leaders (and all Americans) of the racist, anti-black hate speech contained in the sacred rabbinic Mishnah, Gemara, Midrash and Maimonides. The more this knowledge is disseminated, the more blacks will lead the way in defying the Zionists and Talmudists and their theological and psychological hold over America.
Your donation assists our Truth Mission
_____________________________

Michael Hoffman’s writing has appeared in the New York Times and the New York Review of Books. He is the author of the 1100 page textbook Judaism Discovered, and a condensation, Judaism’s Strange Gods: Revised and Expanded. Michael serves as editor of Revisionist History, published six times a year. He is the subject of relentless repression by the ADL, the Southern Poverty Law Center and the media they influence.
____________________

Mr. Hoffman thank you for your article, your voice and commitment to exposing the truth. We are headed down a dangerous path and we need those of every huge, creed and class to sound the alarm before it's too late. May you continue to be blessed and strengthened in the cause of truth. -H. Muhammad