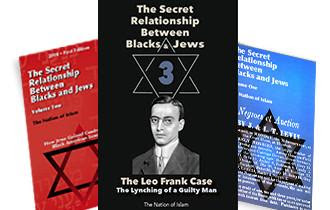 On Feb. 17 at the United Center in Chicago, before a cheering crowd of black Muslims numbered in the thousands — and who knows how many viewing around the world via webcast — this writer lauded the Nation of Islam’s three volume The Secret Relationship Between Blacks and Jews as “magisterial revisionist history.”

Nine days later, on February 26, after having been offered for sale on Amazon for several years, these three books were suddenly banned for “violating content guidelines,” an apparent euphemism for offending the Holy People. Coincidence?

Until such time as alternatives to Amazon (and independent libertarian platforms for podcasting) are created, the Tech Tyranny, as Ron Unz indicates (see below), will march on amid the stark media silence concerning the censorship of history books which Zionists and Talmudists detest. This is indeed a sinister Orwellian state of affairs. Public exposure of the censorship and the hypocrisy that informs it, is essential for the survival of freedom.

Jeff Bezos, who founded and owns a controlling stake in Amazon, also owns the Washington Post whose motto, flaunted in a virtue-signaling 2019 Superbowl commercial, is “Democracy Dies in Darkness” — the same darkness in which the Nation of Islam’s documented history of Judaic control of the black slave trade in the western hemisphere, has been consigned.

During the 2016 presidential race, it was widely anticipated that Hillary Clinton and Jeb Bush would be the contending nominees, fiercely battling each other on hot-button partisan issues while quietly standing together on War, Peace, and the Economy. Such a race would surely have been soporific and vacuous to the vast majority of the general public. The sudden and totally unexpected populist rise of both Bernie Sanders and Donald Trump fractured this projected narrative, and Trump’s election shredded it.

Although the most extreme Neocon elements soon regained control over the foreign policy of the Trump Administration, America’s ruling ideological establishment was horrified by the close call they had suffered, and began an unprecedented attack upon the Internet and dissident publications and writers, with mass bannings, harsh censorship, and widespread “de-platforming.” The most utterly ridiculous accusations—suggesting that Ron Paul was a Russian agent of influence—soon began echoing within the corporate media, and many alternative websites were cowed into trimming their dissenting sails lest they suffer severe consequences.

Many critics were jubilant over the recent closure of The Weekly Standard, the Neocon organ most heavily responsible for the disastrous Iraq War, they have misunderstood the reality of the situation. With so many similar Neocon ideologues now firmly ensconced on the editorial pages of the New York Times, the Washington Post, and every other major newspaper, Bill Kristol’s former publication no longer had any real role to play. I think a case can be made that with the exception of a few zealous Trump partisans here and there, the establishmentarian American media landscape is more totally unified than it has been for decades, especially with regard to foreign policy issues, and dissenting voices never so unwelcome.

When a country’s ruling elites are highly unified but fearful of maintaining their continuing power in the face of popular discontent, harsh crackdowns are a natural consequence, and America’s widely enshrined First Amendment liberties are now being increasingly circumvented on the Internet by utilizing the corporate monopolies that control that means of communication.

During the 1950s, any proposal to ban suspected Communists from making telephone calls, watching television, or having bank accounts would have been ridiculed as utter lunacy, but in today’s America, equivalent actions are steadily growing more frequent and more severe.

With so many vibrant alternative publications having been brought into line and so many once raucous comment sections now strictly policed by strict identity registration requirements or eliminated completely, our webzine (www.unz.com) has gradually become a much bigger fish in the rapidly shrinking pond of free thought on the Internet.

We shall see whether the angry flapping of our contributing writers achieves any result before the “Powers That Be” complete their total evaporation of all remaining intellectual freedom in the Western world.

Hoffman’s Speech to the Nation of Islam

Hoffman’s Essay: “My Service to the Nation of Islam”

We are forwarding this comment (received in e-mail) on behalf of our reader W.S.:

I LITERALLY just received volume 3 a few days ago from Amazon. I just missed the ban. Your mention at the NOI talk motivated me to complete my collection. I bet sales jumped after your mention…

I note that Amazon even went so far as to scrub the entire page for each book in the trilogy. As near as I can tell, you would not even be able to find a used book seller in the amazon network that could sell you the book. Abebooks has the volumes up for sale for a price in the mid-30's. I'm going to see if I can get the volumes directly from the NOI first before ordering elsewhere.