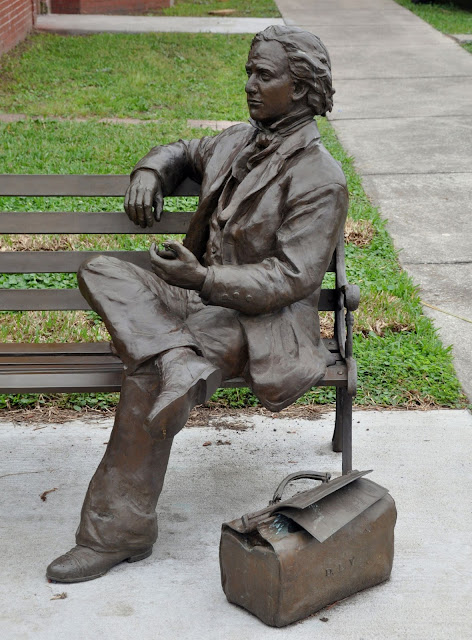 David Levy Yuleee was one of the tens of thousands of Judaic slave-owners of Sephardic-Judaic descent who bought, sold or traded in black slaves in the western hemisphere, as documented in the revisionist history classic, The Secret Relationship Between Blacks and Jews (three volumes).

In the year 2000 the Florida Department of State designated Yulee a “Great Floridian” and “award plaques in his honor” were installed.

Yulee's statue is in Fernandia, Amelia Island, Florida. Needless to say it is untouched. No calls from politicians or antifa terrorists have been issued for its removal.

Neither the ADL or the Southern Poverty Law Center (SPLC), both of which are recent recipients of millions of dollars in “anti-racist” donations from Apple Computer CEO Tim Cook, and 21st Century Fox movie mogul James Murdoch (son of Rupert), have raised the issue of the statue’s removal.

In the halacha of the Babylonian Talmud, there is one law for gentiles and another for Judaics, a distinction which the “revolutionary Left” seems to observe and respect when it comes to memorial sculpture in honor of Confederate slave-driver David Levy Yuleee. 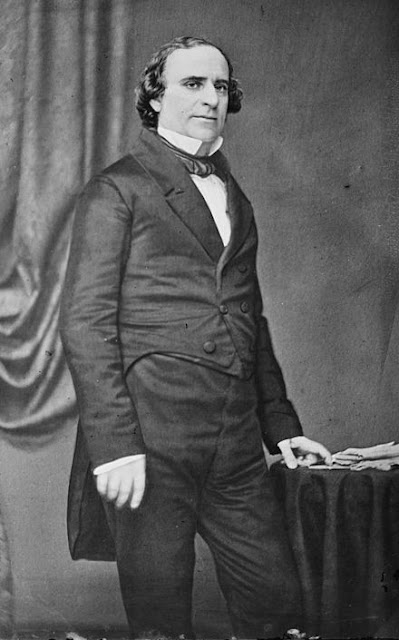 Yulee’s inflammatory pro-slavery rhetoric in the U.S. Senate earned him the nickname, “the Florida Fire Eater.” He resigned his senate seat to support the Confederacy.

Michael Hoffman is the author of They Were White and They Were Slaves: The Untold History of the Enslavement of Whites in Early America.
____________

Will Freemason Albert Pike’s Statue be Removed in Washington D.C?

I am surprised that you neglected to mention that he was also a founder of the KKK and proposed three World Wars for the establishment of One World Government.


But silence is what we get from our leaders and from the agitators for the purging of the memory and pride of ordinary Americans when it comes to this one iconic prophet of Freemasonry from the past. It is because they are of the same satanic ilk as Albert Pike. They have the same agenda.

I am surprised that you neglected to mention that he was also a founder of the KKK and proposed three World Wars for the establishment of One World Government.


But silence is what we get from our leaders and from the agitators for the purging of the memory and pride of ordinary Americans when it comes to this one iconic prophet of Freemasonry from the past. It is because they are of the same satanic ilk as Albert Pike. They have the same agenda.

Slavery irony with selective Confederate Memorial Removals guarantees Modern Day Slavery Human Trafficking prosperity. Globalists staged mobs have kicked themselves in the rear end with the roots of racism by selectively removing the very thing that reminds us not to do; prospering human trafficking slavery in America. 21st American slavery human trafficking is highly profitable.

We laugh at the devil and his failed attempt to ensure modern day slavery through paid globalists henchmen Republicans, Democrats, 2nd rate archaic and mediocre sports athletes, Globalist 'Christians” “pastors” and “demon-deranged-scripture memory lapsed-denomination demonizers”, mainstream media, international banking cartels like JP Morgan Chase, and other Non Governmental Organizations in our Republic. They are bought and or bribed Globalist Agents forged from the boughs of hell bent to enslave your women and children in their socialist Amerika dream, comrade.

"And Joshua said unto them, Pass over before the ark of the Lord your God into the midst of Jordan, and take you up every man of you a stone upon his shoulder, according unto the number of the tribes of the children of Israel: That this may be a sign among you, that when your children ask their fathers in time to come, saying, What mean ye by these stones?  Then ye shall answer them, That the waters of Jordan were cut off before the ark of the covenant of the Lord; when it passed over Jordan, the waters of Jordan were cut off: and these stones shall be for a memorial unto the children of Israel for ever." (Joshua 4:5-7; Emphasis Added)

The defacto President Of The Confederate States was one Judah Benjamin,a former US Senator from Louisiana.He held THREE cabinet posts simultaneously ; State , Tresuary ,war ! After the conflict Benjamin went to Britain with not much problem. He became a British subject , barrister,and very rich. Like Churchill in two world wars ,he served the Rothchilds well ( Slave trade kingpins .....slave trade kingpins among other things ! The media : Hollywood, Documentaries, books don't much discuss this esteemed Jew . I wonder why ? ��

Albert Pike was the 33rd Freemason Confederate Gen Slaver associated with NWO and 3 world wars comment freemasons get pass too, Pike has 2 statues one in NY and 1 in DC, Antifa or Black not interested though cuz freemasonry. It's all scripted

The only country that didn't have slave trade was Germany .
Hail their history today !!
https://www.quora.com/Did-Germany-play-a-large-role-in-the-Atlantic-slave-trade