A Chronicle of Calamities and Catastrophes for Gentiles

By Michael Hoffman
Copyright ©2016 by Revisionisthistory.org

Purim is the rabbinic festival of revenge derived from the Book of Esther and then further embroidered and extended by authoritative Talmudic and Kabbalistic traditions which are observed in Orthodox Judaism as a sacred obligation. An online column is insufficient for anything approaching a full explication of Purim.  A more extensive study will be found on pp. 823-827 of this writer’s Judaism Discovered.

Purim is celebrated as a festival commemorating revenge upon non-Jews. Pious Judaic believers dress in various grotesque, Halloween-type of regalia; much of it reminiscent of the reversals common to the medieval feast of fools, whereby persons of low station masqueraded as aristocrats and aristocrats as peasants; villains as saints and alleged holy people as demons. Consequently, on Purim in New York this writer has witnessed Israeli-Americans dressed as Arab suicide bombers complete with ersatz bomb belts, and rabbis attired as women, gorillas and clowns.

There are deeper meanings attached to Purim than reveling in vengeance against one’s enemies, real or imagined. These are largely outside of our purview here, except to note that Purim entails a perverse obligation for the Judaic male to become intoxicated. He is to become so drunk on Purim that he can’t discern the difference between Mordechai (the Judaic hero of the Book of Esther) and Haman (the Hitler-like villain of the book). In other words, Judaic males are to become nearly blind drunk on Purim. The Talmudic injunction for this behavior is found at BT Megillah 7b. The esoteric reason for this intoxication, which produces a perception of the union of opposites, i.e. of good and evil, rests on the Kabbalistic doctrine (cf. Zohar Bereishis 36 and Chadis 2:137b) which is the occult secret of Purim: that both Haman and Mordechai serve the purposes of Judaism. As the eminent Rabbi Samson Raphael Hirsch explained it, “...anti-Semitism is the tool through which the God of Israel preserves his people.” 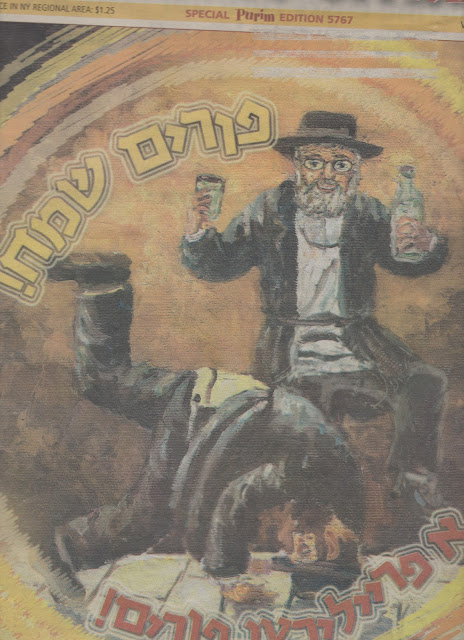 Reproduced above is a full-color front page from a devout Orthodox Judaic religious newspaper. It was published on the 12th of Adar 5767 (March 2, 2007). It depicts two Judaic men drunkenly cavorting on Purim: one is holding a liquor bottle and glass of liquor, the other is doing a tipsy somersault; both men are fulfilling their religious obligation. 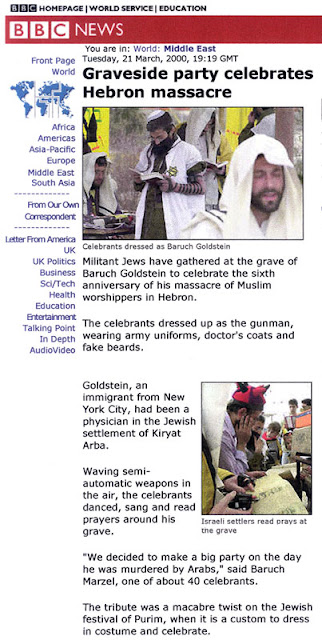 On Purim 1994: 14th of Adar (February 25), Dr. Baruch Goldstein, an Orthodox Talmudic Israeli from Brooklyn, took a machine gun into the Cave of the Patriarchs in the Palestinian city of Hebron and massacred 40 Palestinians while they prayed (the media have engaged in massacre-denial and reduced the number of those he murdered to 29). He has a shrine in his honor in the Israeli state. The Ninth Degree of the Scottish Rite of Freemasonry, dedicated to revenge on Masonry’s enemies (by beheading), is inspired by Purim.

On Purim 2001:The late Supreme Court Justice Antonin Scalia aided and abetted, as his numerous activities on behalf of Talmudic training for U.S. lawyers and his own statements testify, the imposition of Talmudic halacha (law) on America. The first documentation in writing which we have of this ominous fact is the letter he dated March 9, 2001, written on Supreme Court stationery, pledging support to a rabbi of the Chabad Lubavitch sect of Christ-haters. Was it a coincidence that Judge Scalia chose to pen his letter to the rabbi on Purim, the 14th of Adar 5761? (For more on this cf. Revisionist History newsletter no. 83).

On Purim 2003: George W. Bush, the Skull and Bones society snake who Scalia helped make President of the United States (cf. Bush v. Gore, 2000), launched the invasion of Iraq during Purim —16th of Adar 5763 —which resulted in the catastrophic decimation of Christianity in that Arab nation and the deaths of tens of thousands of goyim.

In Purim week 2016: approximately 35 hours before the beginning of Purim on Wednesday, March 23 at sundown, 14th of Adar 5776, more than 30 gentiles were slaughtered at an airport and subway station in Brussels, Belgium, and hundreds more wounded (cf. “Purim in Brussels”).

Perhaps it is a coincidence that the mass murder, the subversion of the US Constitution, the invasion of the nation of Iraq and the terror slaughter in Brussels all occurred on or near Purim; and then again, perhaps not.

Let him who has eyes to see, do so.

Michael Hoffman is a former reporter for the New York bureau of the Associated Press and the author of eight books, including Judaism Discovered, and Judaism’s Strange Gods.
Donations toward the survival of Michael work can be made here.
___________