Today is the 68th anniversary of the Israeli massacre of Palestinians at Deir Yassin, near what is now Yad Vashem holocaust museum, which takes no notice of the massacre 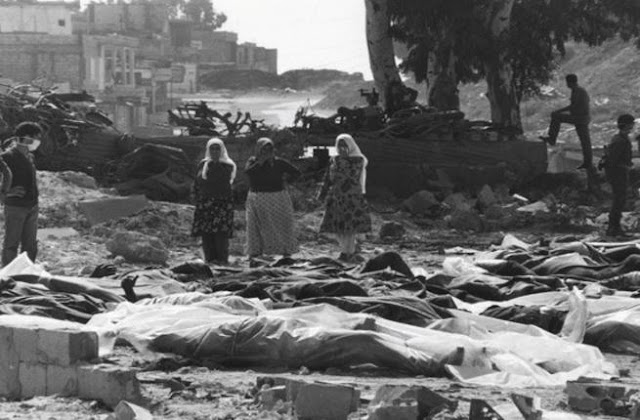 Palestinian victims of the Israeli massacre at Deir Yassin, April, 1948

You will search in vain today for any significant notice in the U.S. media of the Israeli slaughter of more than 100 Palestinians in the village of Deir Yassin, on April 9, 1948.

Some of us suffer from compassion fatigue and the reaction may very well be, so what else is new?

We have grown apathetic. The episodic genocide of Palestinians is routine and seldom commemorated in the American media, which commemorates every stubbed toe suffered by Judaic persons under the Nazis; such is the Talmudic double-standard.

But if the massacre of fellow human beings does not at first elicit a noteworthy response, consider this: the site of the destroyed village of Deir Yassin, which the Israelis completely razed in the 1980s, is located a few hundred yards from the world-famous “Yad Vashem Holocaust Museum,” where world leaders are herded for the obligatory weeping and wailing over the sufferings of The Holy People. The suffering of the Palestinian “unholy” people just down the road from Yad Vashem is unworthy of notice. There are few more telling examples of the praxis of the Talmudic mentality.

Lastly, the Israeli terror group which perpetrated the Deir Yassin atrocity, the Irgun, had in its employ a certain Elie Wiesel, the future celebrity “Holocaust” maven and Nobel Prize winner.

The malignant hypocrisy which leads the Holocaust-besotted Establishment media to ignore Deir Yassin while pounding into our collective cerebral cortex our obligation to “Never Forget” the “holocaust against the Jews,” is nothing less than a moral cancer.

Michael Hoffman’s book, The Israeli Holocaust Against the Palestinians, is out of print. Used copies are for sale here.

Mr. Hoffman's work is supported by donations from truth-seekers and sales of his books, newsletters and recordings.
________________

Fortunately, Yahweh will NEVER FORGET the hideous crimes of the "rebellious house of Israel". It's only a matter of a little more time before His "gathering" is complete and His Fury will be unleashed on the unsuspecting "UNholy People" in Zionist Israel (Ezekiel 22:20). As they say in Tel Aviv: MAZEL TOV!

The "rebellious house of Israel" (sic) is long gone. This is the Synagogue of Satan spoke of in Rev 2:9 and 3:9.