Editor’s Note: Idaho, where we maintain our office and residence, has a well deserved reputation as one of the most Conservative-Republican and heavily-churched states in the Union. Many residents pride themselves on their alleged Biblical and family values and that’s a good thing, but their knowledge of the Scriptures is woefully inadequate.

With an interest rate on loans in Idaho pegged at an ungodly mafia-rate rate of predation of 582%, many Republican church-goers are either flagrant hypocrites or grossly ignorant of God’s law concerning loans of money.

The Republican-dominated Idaho legislature recently passed a “reform” of the “Payday loan” laws - a “reform” which continues to permit greedhead buccaneer-capitalists no limit on interest rates. More than ever Christians and Conservatives need to learn what the Word of God has to say concerning these financial crimes against humanity that make a mockery of the teaching of Our Lord Jesus Christ.

Greed-is-good Republicans are destroying families and the moral fabric of our nation.
Concern over the mortal sin of interest (renting money), cries to heaven for ministers and priests who will declare the Scriptural truth concerning it to their congregations and parishioners; teach it consistently as a catechism contra the supreme evil of money-love, and make usury a grounds for withholding communion and fellowship. In this writer’s six decades on earth however, I have encountered not a single church that fulfills all of the preceding requirements, even though they were the belief and practice of Jesus Christ’s Church from A.D. 33 to circa A.D. 1500.

Idaho’s payday lenders charge the highest interest rate in the nation - an average 582 percent, according to a study from the Pew Charitable Trusts. The trusts found that Idaho, Nevada and Utah had the nation’s highest interest rates for payday loans; the three states are among seven that put no limits on those rates. Click below for a full report from the Salt Lake Tribune via the Associated Press; the Tribune reported that 15 states either ban payday loans or cap interest rates at 36 percent.

The news comes after a payday loan reform bill that contains no caps on interest rates passed the Idaho Legislature this year amid much controversy; opponents said the bill, backed by major payday lenders, didn’t go far enough to reform the business in Idaho. SB 1314, which passed the House by just one vote, was signed into law by Gov. Butch Otter on March 26. The new law, which takes effect July 1, limits borrowers taking out payday loans to an amount not to exceed 25 percent of their gross income, with the borrower to provide the proof of that; and requires lenders to offer borrowers who can’t repay their loans on time a once-a-year option for an extended payment plan without additional fees.

Idaho, Nevada and Utah have among highest payday loan rates

SALT LAKE CITY (AP) — Idaho, Nevada and Utah have among the nation’s highest interest rates for payday loans, according to a report.

The study, released this week by the Pew Charitable Trusts, found their rates are so high mainly because they’re among only seven states that impose no legal limits on them.

Among states with storefront payday lenders, the lowest average interest charged is Colorado at 129 percent, which matches its legal limit. The next lowest are Oregon at 156 percent and Maine at 217 percent.

Fifteen states either ban payday loans or cap interest rates at 36 percent. None of them has any storefront lenders. Without a limit on interest rates, competition among lenders does not tend to lower rates much, according to the research.

Representatives of the Alexandria, Va.,-based Community Financial Services Association of America did not immediately respond to requests for comment Sunday.

The study also found the nation’s four largest payday loan companies charge similar rates to each other within any given state, usually at the maximum allowed by law. States with higher limits have more stores, but the rates remain higher and competition does not lower them much.

“This new research shows that payday loan markets are not competitive,” Nick Bourke, project director for Pew, told The Tribune.The study urges states to limit payments to “an affordable percentage of a borrower’s periodic income,” saying monthly payments above 5 percent of gross monthly income are unaffordable. On average, a payday loan takes 36 percent of a person’s pre-tax paycheck, Bourke said.

“Customers simply cannot afford to pay that back and still afford their other financial obligations,” he said. “This is why you see people ending up borrowing the loans over and over again.” 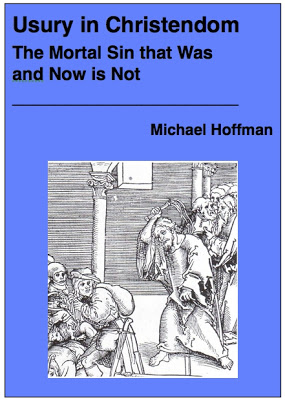 Don't those states also have the largest population of Mormons with many in government offices?

"Latter-day revelation does not contain restrictions against interest charges."

Thank you for this reference to the Mormon (“Latter Day Saints” [“LDS]") document.

As horrible an act of defiance of God’s Word is the Mormon teaching, at least it is absent the hypocrisy of the post-Renaissance Church of Rome and its hypnotized apologists who have the chutzpah to claim "the Church still teaches that usury is wrong."

The biggest "blasphemy" that so-called "Christian" churches commit is the one that insists that the Moasic Law (contained in the Torah) is somehow still "in effect" (when it was FULFILLED BY JESUS' PERFORMANCE ONCE AND FOR ALL). This includes any laws on "usury". Therefore, the Law of God (from the Old Testament) is MOOT (and any subsequent "laws" such as the Talmudic ones, being a cheap imitation of the ALREADY FULFILLED LAW, SHOULD NOT BE FOLLOWED). Heaven forbid you hear any "church" tell you this ULTIMATE TRUTH!

Of course I disagree with you, as did Jesus Christ who said He came to fulfill the law and not destroy it, including the laws against interest on money as He restated them in Luke chapter 6.

Your opinion leaves the door open to homosexuality since there are no New Testament “laws” against it. The statutes against sodomy are all in the Old Testament.

By the way, one can’t “already fulfill” a law against the sin of usury, any more than one can against murder. Murder and usury happen all the time. “Fulfillment" of the laws against them requires constant enforcement.

Jesus and the apostles quoted the Old Testament favorably a few hundred times. It was not obsolete then, and its eternal laws (as opposed to ceremonial observances) are still in effect today.