The Talmudic Mentality in Action 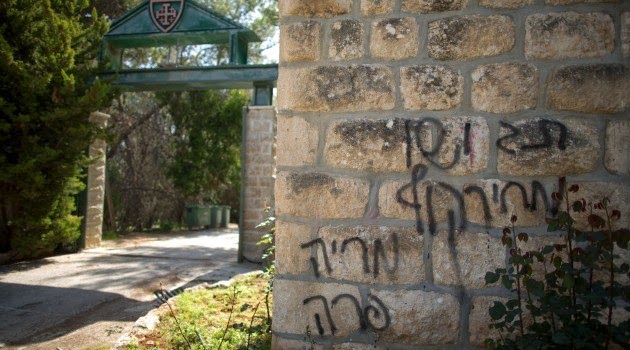 The vandalized wall of the Deir Rafat Catholic monastery, March 31, 2014

Israelis have vandalized a Catholic monastery and spray-painted in Hebrew on a wall:

Late in the evening of Monday, March 31, 2014, vandals slashed automobile tires and defaced the walls of the Catholic Deir Rafat monastery, near the Israeli city of Beit Shemesh, 19 miles west of Jerusalem. Beit Shemesh is home to the Ramat Beit Shemesh Bet neighborhood, a Talmudic, “ultra-Orthodox” enclave. On Tuesday morning, the monks awoke to discover the blasphemy. Other monasteries in the Israeli state have suffered repeated attacks. In August, 2013, a firebomb was hurled at the neighboring Beit Jimal monastery. Since 2009, twenty-nine Christian monasteries have been desecrated in the Israeli state and the occupied West Bank.

These attacks derive from the teachings of contempt for Jesus (BT Gittin 56b, 57a) and Mary (BT Sanhedrin 106A) which the Talmud imparts to its followers. The Establishment media and the Pope of Rome usually have little or nothing to say about these Judaic blasphemies, whereas had these crimes been directed at a synagogue located in close proximity to an "ultra-traditional Catholic enclave," then the outrage of the pope, the professors and the media would reverberate around the world, with cries of "Antisemitism is spiraling out of control!" The result would be another indoctrination campaign concerning "hate speech and the rising tide of anti-Jewish bigotry."

When the animosity emanates from the Talmudic religion of counterfeit-Israel however, as in this case, there is a massive, collective silence which testifies to the fact that anti-Christian Talmudic hate speech is not regarded as being worthy of exposure, protest or condemnation. It is by suppressing reports of attacks like the one that occurred on this monastery, while magnifying anything remotely similar that befalls rabbinic people and places, that the impression is deceitfully conveyed by the media and the leaders of Judeo-Churchianity that "hate" is a one-way street: mostly a matter of the victimization of the eternally persecuted "Holy People" by wicked Christians who must make amends, undergo sensitivity training, repudiate their heritage, and beg forgiveness of the "Jews.”

To this we say, "God exalted Him to the highest place and gave Him the name that is above every name, that at the name of Jesus every knee should bow." (Philippians 2:9-10). Jesus said to His followers that to have our prayers answered we should ask in His Name (John 14:13). We will defend His Name and Gospel to the utmost, while praying for the bigoted and deluded people who, to the detriment of their eternal salvation, defile and defame Jesus, the Messiah of True Israel.

2012 blasphemy against the Trappist monastery in Latrun, near Jerusalem — allegedly perpetrated by Micky Rosenfeld from Bnei Brak (a center of Talmudism): 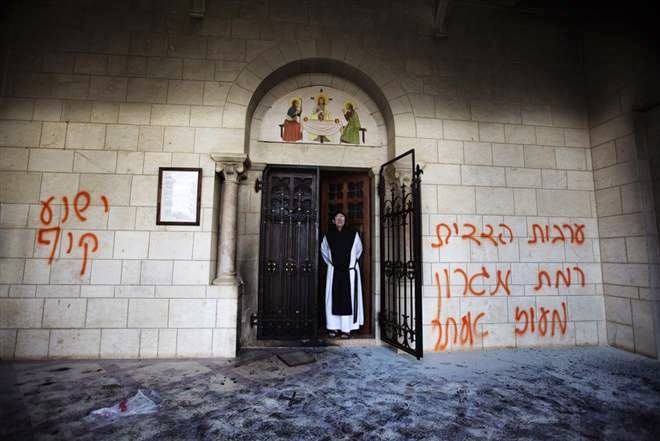 “Jesus is a monkey” once again spray painted on the wall.
The door to the monastery was set ablaze. 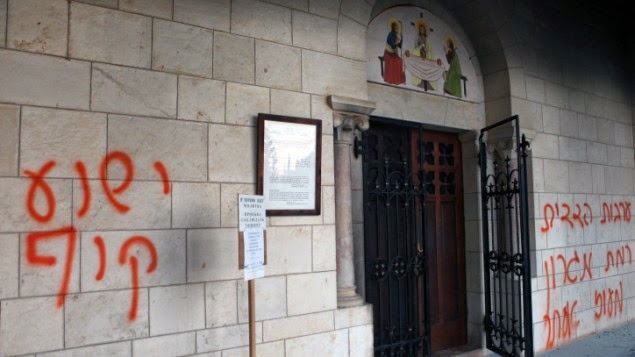 Please donate to our Truth Mission

It seems that the entire media of the world is with the Judaics who get away with murder. I was horrified to see a Press TV headline Netanyahu by his Judaic pet name "Bibi"!

This goes on all the time. NOt to mention the spitting in the face and physical assault of priests, breaking of windows and throwing of garbage onto front door steps. If people knew just how obnoxious the local orthodox and ultra orthodox truly are they would find no rest in any country on this planet.

Regards, and thanks for your work. I plugged your book night and day during my trial.

You take a couple of incidents, likely done by rebellious teenagers, and you make it sound as though all of Israel is hostile to Christians. I suggest you find a better means of generating Adsense income.

1. We do not receive any income from Google's AdSense. Our blog is published as a public service and supported by donations from readers.

2. Contempt for Jesus and Mary is a formal doctrine of Orthodox Judaism, a religion which is not directed by adolescents.

This contempt is ingrained in the Talmud Bavli, the Mishnah Torah of Rambam, the Nizzahon Vetus and in the teachings of the leading Orthodox rabbis of our time, as documented in my books “Judaism Discovered” and “Judaism’s Strange Gods,” which you obviously have not read yet feel free to peddle your ignorance anyway.

It does my heart good to hear you use the names "counterfeit Israel" and "True Israel". For the only real Israel is "the Israel of God" Gal.6:16, of which Hagee and the fundamentalists have no knowledge.