In the pope’s backyard Italians are becoming extinct

Michael Hoffman’s Note: Neither “Saint” Pope John Paul II nor his current successor, Pope Francis, ever truly admonished married Italian men and women for their abominably selfish attitudes toward procreation. Yes, even John-Paul “the pro-life pope” gave the Italians a Humane Vitae “lite" approach, knowing full well that Catholic confessors in the West were exculpating married couples who practiced contraception. John Paulphiles can produce — if they can — contrary evidence in our comments section (below). We’d love to see it, but we predict that all they will be able to come up with is some token wrist-slapping from JP-II. This is one reason why, upon his death, Italians demanded immediate sainthood for Pope John Paul —  he did not raise the spectre of disaster and damnation toward those Italians who do not possess enough spark to reproduce themselves. Had the Italians "denied the Holocaust” however, then you can be certain he would have invoked the wrath of God upon them.

With Pope Francis, as a result of his notorious “Who am I to judge?” maxim, counseling against contraception is not a high priority. A recent pro-life march and meeting in Rome was dismally attended by a total of exactly one Catholic cardinal or bishop, Cardinal Burke. The pope and the rest of the hierarchy were absent. They have more important priorities that engage their passionate concerns, as for example, civil unions for sodomites, which is at the top of their list; being popular with the world and its media is also exceedingly important to them.

The hierarchy of the Church of Rome, starting with the current pope, cannot be said to be other than coffin riders sailing over the extinction of the Italian nation with a wink and a nod. No doubt they feel that North African immigrants will make better citizens of Italy than the Italians themselves. Perhaps they are right. North Africans do have enough children sufficient to reproduce themselves. Meanwhile the Wall Street Journal reports that Italy “already has around 150 over-65s for every 100 people under 14.” 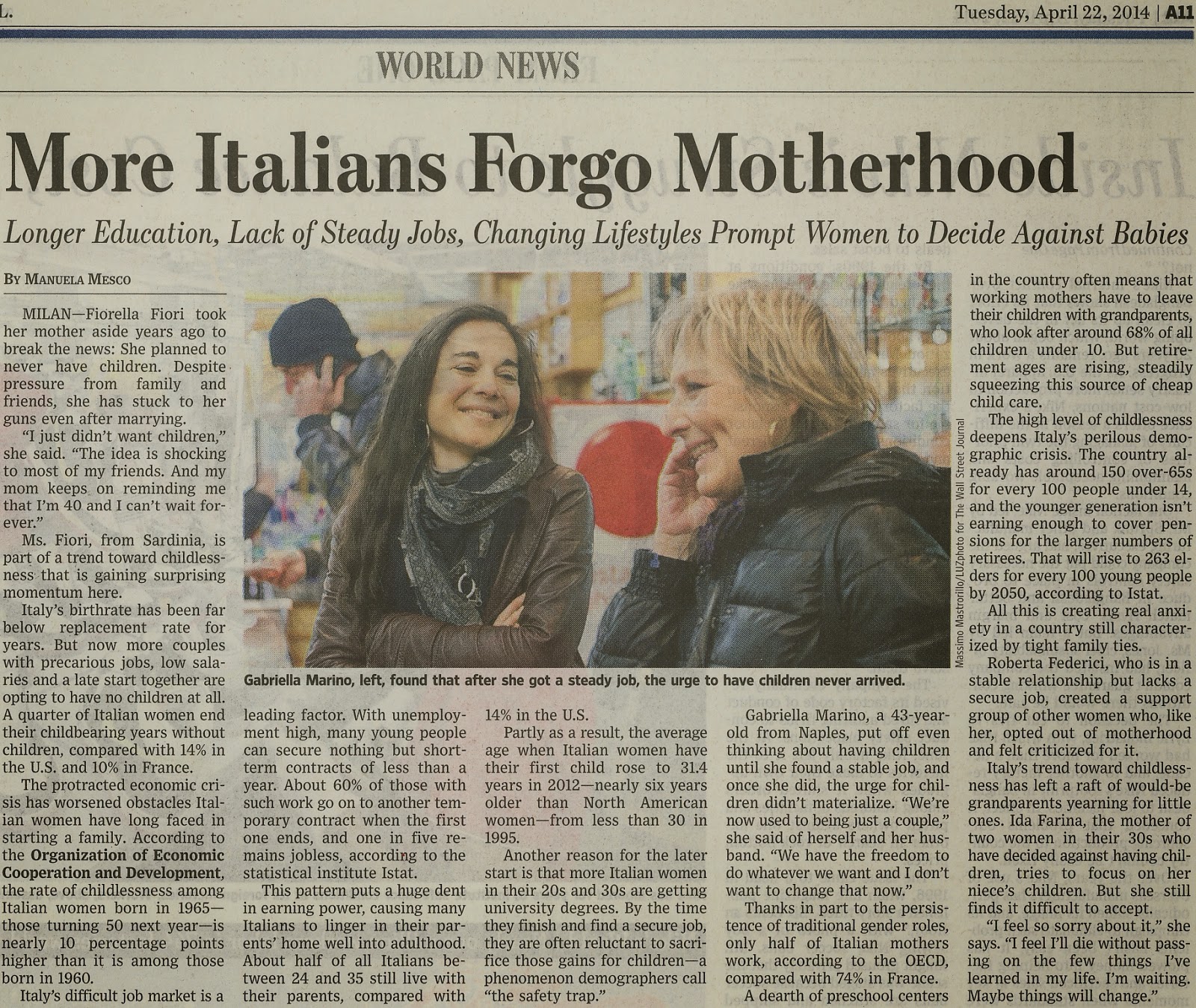 Email ThisBlogThis!Share to TwitterShare to FacebookShare to Pinterest
Labels: Church of Rome, demographic crisis in Italy, Humane Vitae, Italian women decide against babies, Manuela Mesco, North African immigrants, Who am I to judge?

I appreciate your comments, but why not say a word for the prospect of converting these North Africans?

As an erudite historian, you know very well that North Africa was part of Christendom until the rise of Islam in the 7th century.

Of course, the rush to conanise this disorientated and disorientating papal figure was out of necessity - to take advantage as quickly as possible of the radically new "sanctification" process from 1984 & to steamroller through a totally unacceptable candidate for sainthood. No wonder they ignored his papacy of chaos and confusion because this alone would have excluded him from any such manoeuvre.

The whole tempo was to play on emotion; use germanic blitzkreig methodology to push the process along quickly, ignore all the obvious evidence against any validity at all and to keep as tight a lid as possible on the Truth about this person. Because The Vatican dislikes Truth in this current age.

Furthermore, because we have had 45 years of ecumenical man-centred protestant liturgy feeding the neo-catholic faith, most new catholics haven't got a clue what The Roman Catholic Faith is anymore. In fact, the term Roman catholic has been abandoned altogether alongside 50 years of subversive liberal modernist revisionism of ecclesiastical history & doctrine and what it signifies; 50 years of protestantisation of liturgy disembodying The Faith of which John Paul II was principal exponent and 50 years of the the radicalisation of pastoral processes in parallel with ecumenism, interconfessionalism, collegial horizontalism, feminism, presbyterial homosexuality and pantheism. It is not for nothing that Ratzinger and Wojtyla espoused the philosophy of Chardin above all.

We no longer have The Roman Catholic Church as this belonged to the pre-conciliar paradigm of Faith over 1900 years. The dubious figure of Pope Paul VI ushered in the New Age of anthropocentric religious eclecticism replete with its novus ordo liturgy guaranteeing the new faith paradigm.

Significantly John Paul II admired most this pope and attempted to rush through his conanisation but the courageous and holy figure of Padre Luigi Villa stood in the way with his unshakeable faith, Padre Pio's encouragement, together with his magnificent and well-referenced works revealing the infamy of post-conciliar treachery led by its postmodernist pantheistic papacies.