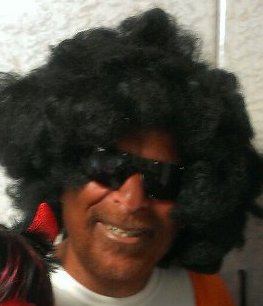 Assemblyman Dov Hikind (D-New York), in Afro wig and blackface at a Purim gathering, Feb. 24, 2013. His wife dressed as the devil to celebrate the religious festival.

As part of the Judaic holy day of Purim, New York legislator Dov Hikind shucked and jived in minstrel blackface. If this was any public official other than a Talmudist, his resignation would have already been tendered.

Mr. Hikind’s act is in strict accord with Orthodox Judaism's institutionalized anti-Black racism, based on three principal rabbinic texts, and hundreds of ancillary ones, which are derived from the following three.

3. The teaching of Isaac Abarbanel, as accurately quoted by David Brion Davis in his history text, Inhuman Bondage: The Rise and Fall of Slavery in the New World (Oxford University Press, 2006; p. 55).

Moreover, Hebrew-language Israeli newspapers recently reported that African women in the Israeli state have been deceived into being vaccinated with the contraceptive drug Depo-provera to keep their population down.

As for Purim itelf, Judaic religious customs associated with the holiday include a host of primitive revenge motifs such as consuming pastries shaped like Haman’s ears (oznei haman; in Yiddish: homentashn), and creating a purimgreger (cacaphony) when Haman’s name is mentioned (homenklopfn) in the synagogue.

Also on Purim, Judaic males are commanded by rabbinic tradition to get so drunk they can't tell the difference between Haman and Mordechai. Lord-of-Misrule gender and role reversals (Judaic men in women's attire, Israelis dressed as Arab suicide bombers complete with ersatz detonation belts), and all manner of grotesque Halloween-like attire, are also a feature of this pagan bacchanal, which is presented to the public as “a Biblical commemoration” by “Torah-true Jews."


Concerning the evolution of blackface in America, William N. Grimstad pointed out in his privately printed opus, Talk About Hate (1999), in a chapter titled “Mockery Mongers,” that the gentle and sentimental minstrel show heritage of the 19th century was transformed into callous derision with the next century's “coon-shouting” genre, which was pioneered largely by newly arrived immigrants from Eastern Europe such as Sophie Tucker, Al Jolson and Eddie Cantor. Mr. Grimstad notes that these just-off-the-boat Khazars felt entitled to mock Black Americans, whose ancestors had been in this country for 300 years.

From whence does this mockery and contempt derive -- out of thin air -- or from 1600 years of rabbinic tradition?

Michael Hoffman is the author of Judaism Discovered and Judaism's Strange Gods. If you think his work is important, please send a donation today to Independent History and Research, Box 849, Coeur d'Alene, Idaho 83816. Or donate online here.

"A prominent state assemblyman from Brooklyn defended himself on Monday after wearing blackface to a party he hosted to celebrate the Jewish holiday of Purim. Dov Hikind, a Democrat and a longtime power broker in the Orthodox Jewish community, wore an Afro wig, brown makeup, an orange jersey and sunglasses...Mr. Hikind said that he was flabbergasted by the outcry, and that he suspected many did not understand the tradition of dressing up for Purim. 'My wife, you saw the picture, she was the devil,' Mr. Hikind said....'A lot of people just don’t realize, on Purim, in a sense, forgive me for saying this, you do crazy stuff...”