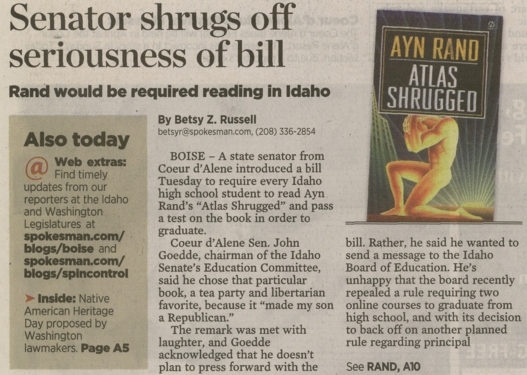 
If the foundations be destroyed, what can the righteous do? (Psalm 11:3)

What is it about Idaho, which has a reputation as a predominately "Christian conservative" state, yet where greed reigns supreme, in the form of permissible usury at a rate of 400% interest on "Payday" loans, and a 6% sales tax on the food we buy for our children? The latest manifestation of this culture of avarice is the proposal by Idaho's Republican Senator John Goedde of Coeur d'Alene, to make the reading of a novel by Ayn Rand  (Atlas Shrugged), mandatory for public high school students (cf. Spokane Spokesman-Review, Feb. 6, p. 1).

Rand taught the concept that “greed is good.” Just as Karl Marx founded Communism, which possessed no moral constraint,  Rand founded a super-Shylock, hyper-Capitalism (dubbed “Objectivism”), that also lacked any moral constraint. She viewed charity to the poor with more jaundice than Ebenezer Scrooge. Rand, who was the author of The Virtue of Selfishness, cannot comprehend charity to anyone, except perhaps one’s own inner circle, and then only as a personal choice, not a duty. The Christian virtue of doing for others and for the less fortunate is regarded by Rand as a violation of the will and ego of the 'Atlas man,' the money maker supreme. This skinflint, dog-eat-dog barbarism (Isaiah 10: 1-4)  is what the goddess of greed and her Republican cheerleaders are all about.

What happens to the New Testament’s poor man Lazarus, in a land ruled by Ayn Rand’s capitalism? Under Rand, Lazarus would not have a scrap of food off the rich man’s table. He would die, as did the Biblical Lazarus in Luke 16, in privation and agony. Rand can approve of this because in her world, exactly as in the Soviet empire of Lenin and Trotsky, there is no god except the material world itself. Like the Communists, the Capitalist Rand refuses to acknowledge the Scriptural truth that every property-owner is God’s tenant and owes charity to the poor, and thus is impelled by an informed conscience to voluntarily share one’s wealth in some measure (Isaiah 58:7; Nehemiah 5:1-19). Instead,  she promotes the option of depraved indifference to the poor.

I would not be expending five words on this debased loanshark, who was so far gone that she shamelessly trumpeted her “virtue” of selfishness, were it not for the astonishing datum that Rand is a guiding light to many who claim the mantle of the “Christian Right” in the early 21st century. Rand’s ideological perversion is the driving force behind NAFTA, the WTO, “free trade,” many Internet technology capitalists, and many preachers of Churchianity, along with Right wing “Constitutionalists” who don’t know or simply don’t care that Rand is the personification of the terminal usurer — usury taken to its farthest and most degenerate extreme (Exodus 22:25; Ezekiel 18: 12-14).

This is the plague that a "conservative Republican" legislator wants to unleash on Idaho's youth, via a mandatory requirement that they all read Ayn Rand’s Atlas Shrugged and “pass a test on the book in order to graduate.”

Contrary to Rand, Jesus Christ said that we cannot serve both God and mammon, a fact lost on Senator Goedde and the Republican Money Power that rules Idaho.

Could you explain what you mean by "Churchianity?" Thank you.

The true ecclesia (“church”) is the vehicle by which the Truth of Jesus Christ is brought to the world.

Whenever the Church becomes like the Talmudic synagogue — captive to the will of man rather than the will of God — it becomes similar to Judaism, which nullifies the Word of God with man made traditions.

The phenomenon under consideration nullifies Christianity; substituting for it a man-made degeneracy, Churchianity.

To detect and warn against Churchianity is to preserve and defend Christianity, and the True Church founded by Our Lord.