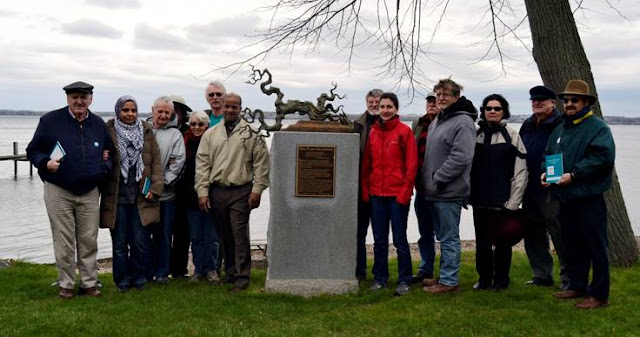 Led by Prof. Dan McGowan, eighteen people gather in New York to bear witness to the Israeli holocaust against the Palestinians, as symbolized by the Deir Yassin massacre.

Israeli Woman Seriously Injured as "Holocaust Siren" Sounds (Thursday, April 19th, 2012)
At 10:00am Thursday morning, a two-minute siren was heard nationwide marking the beginning of "Holocaust" Remembrance Day events. As the siren sounded, a 64-year-old woman on King Shaul Street in Beersheva was struck by a vehicle as she stood at attention during the siren. She was struck by a passing vehicle and seriously injured as she was thrown and pinned between two cars, apparently sustaining a serious head injury. She was transported to the trauma unit of Soroka Hospital in the city. Elsewhere, another woman sustained moderate injuries as she too was struck during the siren on Route 44. She was transported to Ichilov Hospital in Tel Aviv.
________________________

Please support the On the Contrary blog with your gifts and purchases of our dynamic books, newsletters and recordings. Thank you.

How sad it is that only 18 people showed up ! Truly sad !
As to the woman struck in the street during the moment of silence... NEVER assume others will honor what we honor. Don't stand in the street. My prayers are with her & her family.
Shalum !