"Holocaust" revisionist is candidate for school board in Wisconsin

1.  "Holocaust" revisionist is candidate for school board in Wisconsin

2. The case of Nahman and Michael Lichtenstein

Thanks to Joseph Rizoli for this news tip about the courageous German-American Chris Miller, who is a candidate for a Wisconsin town's school board:

Don’t speak ill of your neighbor!
By Christine B. Miller
606 S. Cypress Ave. • Marshfield, WI 54449
Candidate for the Marshfield, Wisconsin school board

I was born, for better or worse, with a keen sense of justice. In the immaturity of my youth not even Jesus escaped my  censoring judicial scrutiny. I  thought  that  Jesus was not always fair, and prone to overstatements. Take the story of  Mary and Martha. Jesus entered the house of the two sisters as an honored guest. Martha runs into the kitchen to prepare the food. Mary however just sits at Jesus’ feet and listens to what her beloved master has to say. Martha comes complaining to Jesus, asking him to shoo  Mary into the kitchen where she,  without help is slaving away on his behalf.  Martha had my complete sympathy. But what did Jesus reply? “Mary has chosen the better part!”

It took  a personal experience which made the scales fall from my eyes.  I had come back from a trip to Germany and was eager to share what I had experienced. But nobody was there to listen,  everybody being in the kitchen to prepare food for me when I wasn’t even hungry. My family tried to satisfy the wants of my body and ignored the wants of my soul.  And suddenly I understood. If  I felt my real wants ignored how much more should Jesus feel it, he who had a message to impart.

A second saying of Jesus: “Do  not speak ill of your neighbor! “  I did not misunderstand,  but I felt the punishment for ill words was harsh. Then one day, browsing through the stacks of the M. public library  I came across George Patton’s book, War As I  Knew It.  Here is the momentous passage (p. 266-267) which opened my eyes to the moral weight of Jesus’ command:

“It was reported …that a certain number of German troops …had captured a hospital column…   The first reports, which came in at night, gave a most horrible account of atrocities, including the murder of all members of the hospital, the raping of all nurses, and the destruction of the ammunition dump.

"In this particular case an officer and two enlisted men were killed in the first fighting. Thereafter, the Germans, while helping themselves to trucks and ambulances, which they used for their own transportation in no way molested the doctors, nurses, or enlisted personnel of the hospital… We rounded them up the next day... In all some eight hundred prisoners were taken and probably five hundred killed, as the soldiers were still under the impression  that atrocities had been committed.”

Jesus in his infinite wisdom knew the power of words. In the beginning were the words, and the words not only caused the death of five hundred German soldiers, but left widows, orphans and young maidens, remaining barren because the young men had been killed. The  United States was brought into the First World War against Germany with words -- words of atrocity propaganda. The Unites States again is at war brought about by words directed against  another “evil Hitler,” namely Saddam Hussein. What do I believe of Saddam Hussein?  I believe that Saddam  kept a fractious country together with an iron fist (remember Lincoln) and tried to keep within bounds the religious fervor of  the Shia sect.

No other people had for so long and so persistently ill words directed against them as the Germans. The predatory pack does not single out the strongest animal of a herd, but the weakest one and that is what Germany has become. What disturbs me most is that the Christian clergy is part of that pack. Is that a sign that the anti-Christ is here, the great deceiver  pretending to do good, but bringing death and  destruction.

In the book  Im Westen nichts Neues (Remarque) three German soldiers knowing each other and how honorable they conducted themselves in battle can’t understand why the Allies  pour  buckets of atrocity  propaganda over the Germans. In the English translation of Remarque's book,  All Quiet on the Western Front, this passage is left out. Is that a hint of a bad conscience, or more lying by omission?

Accompanying my husband to a meeting in Toronto, Canada years ago, I  attended a hearing for Ernst Zundel in front of the Canadian Human Rights Tribunal. The lawyer for the Jewish side, a  Mr. Rosen, grilled one of  Ernst Zundel’s  German defense witnesses who was in  the Hitler Youth. Mr. Rosen imputed that the witness during these years was indoctrinated with hate for the Jews. The witness replied: “No. we did not talk about Jews.” Coming back to his seat Mr. Rosen muttered under his breath: “You are a liar.”

My comment: No, the German witness was not a liar. This writer and all the Germans whom I talked to after the war can tell you the same thing. Unlike the Allies  we were not inundated with atrocity propaganda against our opponents.

I dare to say it! We Germans who were defeated, raped, plundered, starved and are still relentlessly maligned, especially with a transposed Holocaust, were the better Christians. 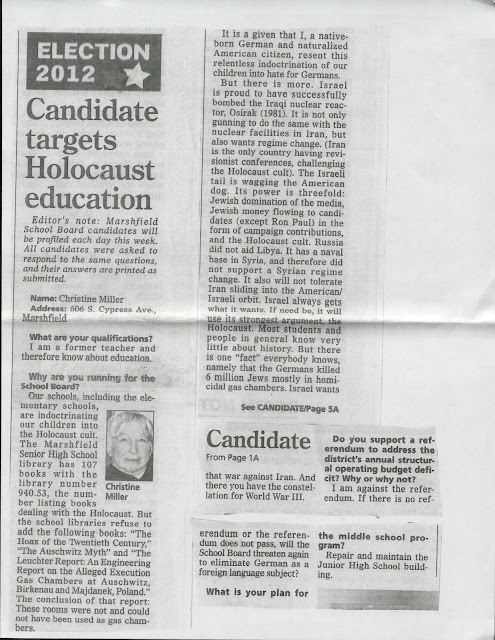 Letter to:
editor@marshfieldnewsherald.com
What a pleasant surprise to read an article mentioning the lively school board candidate Christine Miller. To see this woman's fight to correct "holocaust" education in the schools is such a noble thing and a brave one at that. As someone who has the age, wisdom and the memory to live through the so called "holocaust" it is refreshing that she can bring to light information on a topic that has generally been shaped by media misrepresentation and anti-German hate. Good for her for trying to fight the fight for freedom of speech, even though her adversaries are obviously doing a smear campaign on her. She is a woman of integrity.

By Josh Nathan-Kazis
nathankazis@forward.com
Forward newspaper (NY)
Published April 27, 2012, issue of May 04, 2012
The father-and-son owners of a derelict Philadelphia factory that went up in flames and killed two firefighters in April are members of a prominent Brooklyn Hasidic Jewish family. Nahman and Michael Lichtenstein, who face a grand jury probe in connection with the deadly blaze, are related to a prominent Hasidic rabbi as well as to the publisher of the Orthodox newspaper "Hamodia."

They reportedly own about 30 other properties throughout Philadelphia, many of them vacant and otherwise troubled. Michael Lichtenstein is also developing a multimillion-dollar luxury rental building in one of Brooklyn’s most fashionable neighborhoods.

The former Buck Hosiery Co. building in Philadelphia’s Kensington section had reportedly received numerous citations by local authorities, as well as complaints from neighbors, in the months before the inferno erupted on April 9. Fifty-nine-year-old Philadelphia fire Lt. Robert Neary and firefighter Daniel Sweeney, 25, both died when an adjacent building collapsed. Three other firefighters were injured.

According to Philadelphia press accounts, Nahman and Michael Lichtenstein are subjects of a grand jury investigation that will determine whether criminal charges will be filed over the blaze in the factory they owned. Since the fire, inspections of the other Philadelphia properties owned by the family have unearthed violations and hundreds of thousands in unpaid taxes.

One abandoned row house owned by the men has been used as a headquarters by drug dealers. And a condominium development owned by the men in Center City Philadelphia is in foreclosure proceedings following a default on an $11.5 million bank loan, according to a Philadelphia Inquirer report. The Lichtensteins could not be reached for comment. Their attorney also did not respond to a request for comment. Though Philadelphia press accounts have referred to a third Lichtenstein family member, Yechiel Lichtenstein, as an owner of the Philadelphia properties, documents show that Michael and Yechiel are names alternately used by the same person. Michael is the son of Nahman Lichtenstein and his wife, Ruth Lichtenstein, founder and publisher of the Brooklyn-based, English-language, ultra-Orthodox, daily newspaper "Hamodia." "Hamodia," which is widely read in Orthodox communities around the United States, has a policy against running photographs of women in deference to Orthodox modesty standards. During Hillary Clinton’s 2008 presidential run the paper said it would not publish images of her. Ruth Lichtenstein is a granddaughter of a former leader of the Ger Hasidic dynasty, one of the largest Hasidic sects in the world. She is a cousin of Rabbi Yaakov Aryeh Alter, the sect’s current Israel-based leader. A person who answered the telephone at Ruth Lichtenstein’s office referred questions about the fire to her attorney, who did not respond to requests for comment. Judy Brown, author of “Hush,” a controversial novel about sexual abuse in Brooklyn’s Boro Park neighborhood, is Ruth Lichtenstein’s daughter.

Despite business troubles in Philadelphia, Michael Lichtenstein has invested in a major new residential development in the Williamsburg section of Brooklyn, a once-industrial neighborhood now booming with high-end condominiums. The planned rental apartments are on North 6th Street, around the corner from a subway stop and near an active nightlife strip. The $13.7 million property was purchased last December from the local Catholic parish and consists of a former church, a shuttered parochial school, a rectory and a parking lot.