Watch the video and see what liars certain rabbis are - they claim in the Jerusalem Post that the Israeli officer was attacked with a stick and had his fingers broken and wrist injured prior to bashing the Danish human rights activist in the face with the butt of a machine gun. Watch the video and see if you think the Danish man is responsible for breaking Lt. Col. Shalom Eisner's fingers and injuring his wrist before the officer smashed the blond Danish man in the face:

FROM THE JERUSALEM POST, READ HOW THE RABBINIC DECEIVERS -TRAINED BY THE TALMUD TO LIE - DEFEND LT. COL. EISNER:

"...rabbi of the Samaria region Elyakim Levanon was even more vehement in his support for Eisner...The rabbi...criticized Eisner’s indefinite suspension prior to the completion of an investigation, citing the officer’s claims that the same activist had struck him with a stick shortly before the scenes depicted in the video, breaking two of his fingers and injuring his wrist.


"Former IDF (Israeli Army) Chief Rabbi Avihai Rontzky has also weighed in on the incident, and slammed what he labeled “an instinctive and impulsive” reaction against an officer who has “given his life everyday for the sake of the Jewish nation.” “Correct, it doesn’t look good and the officer himself acknowledges that he made a mistake,” said Rontzky, “but they edited the video so that you couldn’t see that he was attacked and that they broke his hand. They need to look at the big picture.”

Did he get his fingers supposedly broken by protestors, or in the act of smashing protestors with his rifle butt? 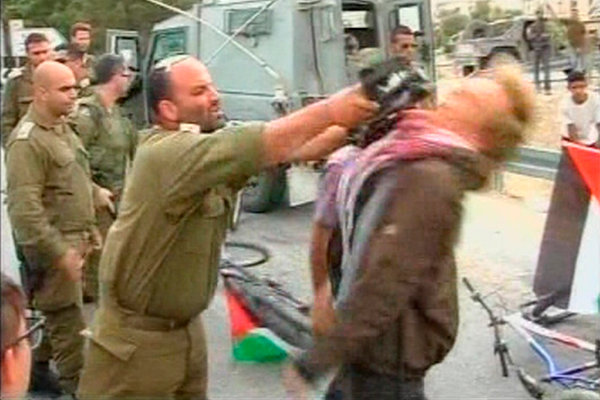 "CHIEF SPOKESMAN" FOR THE ISRAELI MILITARY TELLS THE SAME LIE:

"Yoav Mordechai, the chief spokesman of the military, said that the clash was grave, but that the video clip showed 'only part of the picture' by leaving out violence on the part of the activists. Associates of Colonel Eisner told Israeli news media that two of his fingers were broken during the confrontation. The Danish citizen involved in the episode, reached on Monday by telephone, strongly rejected the accusations. The man, a 20-year-old who identified himself only by the first name Andreas, said the military was filming the whole scene but had not provided any documentation of violence by protesters. A Dutch volunteer said by telephone that Colonel Eisner had also hit her and a Palestinian woman in the face, and a Palestinian man in the back, with his rifle.”
—Isabel Kershner, New York Times, April 16, 20012 (Emphasis supplied).

"MILITARY SPOKESWOMAN" HAS DIFFERENT TALE:
"Israeli military spokeswoman Lt. Col. Avital Leibovich said the officer's actions were not in line with military training and did "not bide with the ethical code and the moral values that we teach our soldiers and commanders" but suggested that the video did not tell the whole story. "It was an illegal riot trying to block a road," Leibovich said of the activists. The video, she maintained, represented an edited 30 seconds of a 120-minute-long event in which the officer in question had his hand broken by stick-wielding protesters.
— Kevin Flower, "Israel suspends officer videotaped striking activist,” CNN, April 16, 2012

COULD JUDAISM BE A RELIGION AKIN TO WHAT THE NEW YORK TIMES, IN ITS APRIL 14 ISSUE, ACCUSES SHIITE ISLAM OF BEING -- A RELIGION BASED ON LYING?

ADDED APRIL 21: New video evidence released proves the Israeli colonel employed brute force unprovoked. In this new video footage (below) Eisner is seen striking five different human rights activists in the April 14 attack. Contrary to Eisner’s own claims, there are no signs of violence from the protesters toward Israeli troops or Eisner.

Amir Mizroch is the editor of the English Newsletter Edition of Israel Hayom, a widely-read Israeli daily newspaper. He says the rifle butt stroke that Eisner delivered to Andreas Ias, the activist participating in the Jordan Valley cycle tour, is a "Krav Maga" blow that Israeli army recruits are taught in their first week of basic training. Krav Maga is one of the deadliest hand-to-hand combat techniques, derived from skills developed by Imi Lichtenfeld. This appears to be what Lt. Col. Shalom Eisner resorted to when faced with the "threat" posed by a group of youthful protestors:

How about a trip to Nuremberg for the fellow.

A comment from one posted on the Jerusalem Post's website just about sums up the Judaic mindset...

"Well I think Eisner should have a statue erected in his honor. It was clearly an act of self defense as everybody can see on the video. We have a biblical right to assault anybody who dares not think like us and we should nuke Danemark by the way for allowing this terrorist to come over here."

(I can't get my comment to preview correctly -- hope this is readable...)

Over at the 972 blog, the hasbara echo chamber commentators try not to admit defeat... The Hasbara-bots have made blog comment moderation necessary; civilized people are quickly getting sick of them. Rude, sociopathic, pusillanimous jerks are not the Brilliant PR Hustlers the IDF pays them to be... outside of the Chosen Land, parts of New York, and Beverly Hills, anyway. Even disinterested people generally loathe bullies.

Life's getting harder for the Hasbara-bots. There's too much Talmudism, too much nastiness in their diatribes and in this video, for a supposed Biblical Chosen Prople. Too many people know the word "Ashkenazi" by now. Why? From people like Mr. H. and his tireless, often under-appreciated work.So glad I've lived long enough to see this.

It is time to return to the pre-1948 borders of the Holy Land and to de-fang and geld the colonies on the Thames, the Potomac, the Hudson, and in H✡llyw✡✡d.