Pakistan: Mystery of US gunman Raymond Davis continues to grow

UPDATED Feb. 21: The incident took place about eight miles from the U.S. consulate. CIA “contractor" and former Blackwater mercenary Raymond Davis was carrying loaded weapons and had a GPS satellite device in his possession. Police say Davis shot each victim five times, including in their backs, and lied to police about how he arrived at the scene. Television stations have broadcast leaked photos, allegedly recovered from Davis's cellphone and camera, that include images of bridges, markets and the road leading to the border with India. Senior State Department officials have said that Davis was not supposed to carry a weapon in Pakistan, while other U.S. officials said that he was a security contractor and did have permission to carry the weapon. Pakistani news reports have said Davis worked for the Central Intelligence Agency, but the United States has steadfastly declined to say anything beyond the fact that he works for the U.S. government. As an investigative-journalist my job is to think outside the box and ask tough questions. If I were in Pakistan I would be asking, is western intelligence covertly directing Al-Qaeda? If so, was Raymond Davis or his commanders in the Toyota (see below) spotting potential target-sites for the next Al-Qaeda bombing. Far-fetched? Perhaps, or perhaps you are too gullible. (Pakistan protestors refer to Davis as a "terrorist"). The U.S. media is doing very little with this story. On Feb. 21 the NY Times reported that Davis was acting as a reconnaissance “scout” for  covert operations in Pakistan, “part of secret war run by the CIA." Here is the BBC report from Feb. 17:
Q & A: Lahore Shootings - Unanswered questions 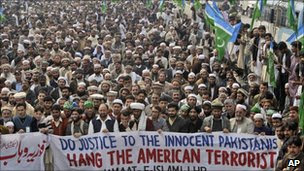 A court in Pakistan has delayed a hearing to decide whether an American who shot dead two men in Lahore last month has diplomatic immunity. The arrest of Raymond Davis has severely damaged relations between the countries. Much of the detail in the case remains unclear - the BBC's Syed Shoaib Hasan looks at some of the unanswered questions.
Is Raymond Davis a diplomat?
If you are thinking of a suavely dressed man in a three-piece suit who holds meetings with local officials to further or broaden his country's agenda, you would be wrong. Mr Davis was definitely not employed for his diplomatic skills - he is more a "hands-on" person, working in what the US embassy says is its "administrative and technical affairs section". Reports from the US say he is a former special forces soldier who left the military in 2003 and is working for the US embassy in Pakistan. As such, the US insists he is covered by the Vienna Convention which guarantees immunity from prosecution for all diplomatic staff.
Could he be a spy?
Many Pakistanis believe he is - there seem few other credible explanations as to why he was going around Lahore with a Glock pistol in a car with local number plates without informing local authorities. It is a requirement for embassy staff - especially those from Western embassies - to inform local police of their movements, simply because they are prime targets for militants in Pakistan. Mr Davis's department in the US embassy is widely seen in Pakistan as a cover for Central Intelligence Agency (CIA) operations. Mr Davis himself said he was a consultant employed by the US government. Researchers in the US say that since leaving the military, Mr Davis worked for a security firm called Hyperion LLC. But subsequent investigations by the US media have now shown that Hyperion exists only as a website. The offices that the company says it has in Orlando have been vacant for several years and the numbers on its website are unlisted. 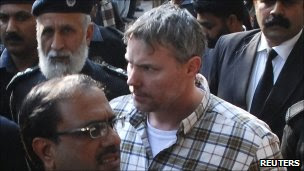 Mystery man Davis
Can Mr Davis be convicted for the murders?
Maybe. It all depends on how eager the Pakistani authorities are to punish him. The fact that he is possibly a spy does not mean he is not covered by diplomatic immunity. It is common practice for intelligence services across the world to send operatives under the cover of assignments to embassies. Both Pakistani and US "diplomats" have been caught in such situations - and every time have been asked to leave the host country immediately with no possibility of a return. That is the maximum punishment that has been levied in the overwhelming majority of cases in countries which have signed the Vienna Convention. However, in some countries there are exceptions for serious offences committed, such as murder. Pakistan is one of those countries. The matter is now in the hands of the judiciary. But it is important to remember that Mr Davis has been charged with murder - the maximum sentence here is the death penalty.
Should Mr Davis have been carrying a gun?
Legally speaking, only Pakistani citizens with licences issued by the interior ministry are allowed to carry arms. No foreigner is allowed to carry arms, except soldiers or guards within the premises of an embassy. Both Pakistani nationals and foreigners caught carrying arms can be charged under a Pakistani criminal law which stipulates a jail term of six months to two years in addition to a fine. Mr Davis has also been charged under this law. 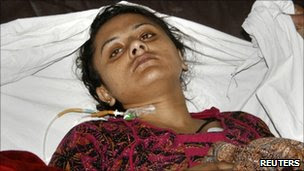 Widow committed suicide
Was he acting in self-defense?
That was the initial plea made by Mr Davis and the US embassy. However, subsequent investigations by the police, forensic labs and the local and international media suggest that the two men were driving away from Mr Davis when they were shot. In February Lahore's police chief said that Mr Davis was guilty of "cold-blooded murder" - he said that no fingerprints had been uncovered on the triggers of the pistols found on the bodies of the two men. Furthermore he said that tests had shown that the bullets remained in the magazines of their guns, not the chambers, suggesting they weren't about to shoot him. On the face of it, this leaves Mr Davis's claim that they were robbers - with one even apparently cocking a gun at his head - looking very thin. In addition, police say ballistics evidence shows that the pair were shot in the back - which again suggests they were moving away from Mr Davis, rather than about to attack him.
Who were the Pakistanis that Mr Davis shot?
In his initial statement, Mr Davis said they were robbers who were trying to steal his valuables. He and the US embassy have maintained this story. However, the men have no criminal records as such. Both have been identified as residents of Lahore by the police. The pair were carrying licensed pistols - a fact which led many to believe they might indeed have been robbers. However, security sources in Lahore say that they were part-time or low-level operatives for the local intelligence services. Although reports are sketchy about what they were doing in relation to Mr Davis, security officials believe it could be the case of a surveillance operation gone horribly wrong. Pakistani intelligence services routinely tail and monitor all embassy staff, Western or otherwise. 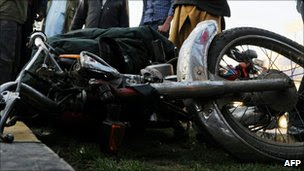 Victim of Toyota driver
What about the second car and its victim?
A side event to the main drama concerning Mr Davis was the fact a third man was also killed during the incident. He was an innocent bystander run over by a US embassy vehicle, which was initially said to have arrived to rescue Mr Davis. The fact that an embassy vehicle was able to get to the spot so quickly was a source of astonishment to anyone who is even vaguely aware of the geography of Lahore. Given the incident was over within minutes, it seems incredible that anyone could negotiate the 12km (7.4-mile) 40-minute drive in peak traffic in less than five minutes. But subsequent investigations have now shown that the second car - a Toyota Landcruiser - was with Mr Davis at the time of the incident. In fact, according to eyewitnesses, Mr Davis was leading and clearing the way for the Toyota when the incident took place. In the light of what happened afterwards, it seems Mr Davis was in "protective mode" and opened fire to "secure" whoever or whatever was in the Toyota - the interior of this vehicle was not visible as its windows were tinted. It is evident in local TV footage that the second vehicle is going away from Mr Davis at the time of the incident. As it disappears into the dust, Mr Davis calmly pulls over and gives himself up. Pakistani authorities have asked for the Landcruiser and its driver to be handed over - a request with which the US has yet to comply.
What about behind-the-scenes negotiations?
As well as public pressure, US officials have also privately warned Pakistan's government of far-reaching and severe consequences if Mr Davis is convicted. Unnamed US officials have also used the media to issue veiled warnings to Pakistan that diplomatic ties could be cut and all aid stopped. Despite Islamabad's public stance on Mr Davis, Pakistani officials are said to have privately assured Washington that he will eventually be released. However, public pressure means that at the moment this could lead to a massive anti-government backlash. Pakistan's Prime Minister, Yousuf Raza Gilani, has hinted that blood money could be paid to the families of the two men Mr Davis admits shooting, which could enable his release. There is speculation that US officials may try to establish contacts with the families in this regard. However, it is not clear that Mr Davis has been charged under laws which would allow blood money to be paid.
***
Posted by Michael Hoffman at 2/18/2011 11:57:00 AM

I pray for divine justice. Lord let every secret things be brought out to light. Lord,Exposed everyone and everthing involved in this evil in Jesus Name. Divine and earthly justice will be serve.

Lahore, "the pearl of Punjab" and "the heart of Pakistan", was the seat from which the British Raj extended their kingdom into the Khyber Pakhtunkhwa - where the 32nd and 33rd parallels cross Pakistan. There is in Lahore a place called Bahria Town, that models many ancient Egyptian style monuments.

And of course, it was and is a central location in the Great Game; once the home of Kipling himself.