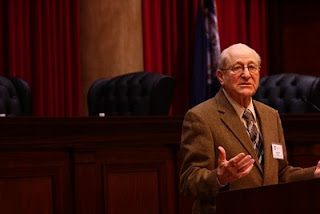 Irving Roth speaking to law students Feb. 16 at Liberty University’s law school symposium on genocide and religious persecution.
From the podium at (the late Rev. Jerry Falwell’s) Liberty University, Holocaust survivor Irving Roth — who narrowly escaped death at Auschwitz and Buchenwald — rolled up his shirt sleeve to show the numbers tattooed on his left forearm.

“The denial of the Holocaust is not simply denying the Holocaust. It’s a tool to denigrate the Jews. It’s a tool of anti-Semitism …” said Roth, a native of Czechoslovakia. “That’s why I come to you and tell you about it. I lived through this.”

Roth spoke to a packed audience Wednesday night during a symposium on genocide and religious persecution at Liberty’s law school. His firsthand account, which wove together humor and bone-chilling accounts of life at the death camps, ended with a standing ovation from the audience.

The goal of the two-day symposium was to raise awareness in Lynchburg of past and present genocides, said law school dean Mathew Staver. Roth was among about a dozen speakers from academia, nonprofits and the government who took on the Holocaust, the genocide in Rwanda and other conflicts.

Roth’s story chronicled the rise of anti-Semitism in Europe and the horrors of the Holocaust that killed his brother, grandparents and millions of other Jews.

He recalled the day, at age 9, when a police officer barred him from playing soccer at his favorite park. The officer pointed to a new sign that read, “Jews and dogs are forbidden to enter,” he said. He recalled the moment, five years later, when he was delivered to Auschwitz in a train packed with 3,000 Jews. “I’m a 14-year-old. I don’t know where I am. All I know is I am some place which is not good,” Roth said.

Of the 3,000 people who arrived with Roth, all but 300 were killed in gas chambers within 24 hours of arriving at Auschwitz, he said. Roth was among the few who were assigned to work in the death camp. By the time Roth was rescued by American soldiers, he had been transferred to the German concentration camp Buchenwald and weighed roughly 75 pounds.

By what Roth calls “one of many miracles,” his parents survived the war by hiding with a Christian family in Budapest. Despite grave risk to her family, a Christian woman with a husband serving in the armed forces of Nazi Hungary took Roth’s parents in and protected them until the war’s end, he said. At the end of his story, Roth urged the audience to emulate the woman who saved his parents.

“My parents survived. Why?” he said. “Because somebody cared. Someone look at two people whose death were imminent and said ‘I need to interfere’ . . . She said, ‘I do not stand by and do nothing. I’ll stand up and be counted.’”

“My parents survived. Why?” he said. “Because somebody cared..."

Ojh, ya...and Palestinians are killed because nobody cares.

Every time a concentration camp survivor gives a speech he has to attack holocaust "denial". (actually virtually nobody serious denies the holocaust, but it's a crime to attempt to significantly revise any of the details)

Why don't they engage in open debate and prove these revisionists wrong, instead of making insubstantial attacks when no response is possible?

It's okay to discuss the estimate of 7 million dead during the holodomor, or to debate whether the Soviet government intentionally tried to kill all of the Ukrainians. Nobody has ever been arrested for "holodomor denial" in Europe.

It's okay to discuss everything, but not the holocaust. Why?