The Jubilee of Elizabeth II: The Queen of Depravity

The Jubilee of Elizabeth II

The Queen of Depravity

June 2 marks the start of celebrations in Britain for the Jubilee of 96-year-old Queen Elizabeth II. The media have enthusiastically joined in the hoopla, extending a blank check endorsement of the System's approved agent.

The queen has played host in the past to numerous blood-drenched communist dictators like Tito and overseen the most rapid dissolution of Britain in its entire history. The  mysteries surrounding the death of her daughter-in-law, Princess Diana, remain unanswered. 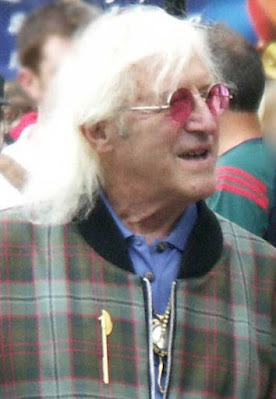 The queen's son and heir apparent, Charles, Prince of Wales, was a known co-conspirator with Jimmy Savile, the demonic child molester who operated at the top of the British pyramid of power, while MI5 British Intelligence, which briefs Elizabeth and Charles, was fully apprised of his hundreds of child victims. While bestowing a gift upon Jimmy for his 80th birthday, Prince Charles told him, “Nobody will ever know what you’ve done for this country, Jimmy. This is to go some way in thanking you for that" (cf. Twilight Language, p. 311).

Savile's sex ring provided children to the patricians of British society and government, including members of Parliament, the House of Lords, the Anglican Church of England, the aristocracy, and big business, some of whom were members of the "Pedophile Information Exchange," which quietly lobbied for the age of consent for sex with children to be abolished. (Twilight Language, pp. 312-313).

Savile either personally raped or facilitated the rape of at least 328 children, even though by the 1980s Savile's horrors were becoming public knowledge. Rock singer John Lydon was interviewed by the British Broadcasting Service (BBC) in 1978 wherein he accused Savile and stated, "We all know about it but we're not allowed to talk about it." The interview was never aired and he was temporarily banned by the BBC. "Sir Jimmy" died a multimillionaire in 2011, respected and honored by Queen Elizabeth, who knighted him in 1990. Throughout his life this ghoul enjoyed total immunity from arrest, prosecution and imprisonment.

As if all this were not sufficient to uncover enough rocks to indict the British royal family for these crimes and their coverup, it turns out that Queen Elizabeth's son, Prince Andrew, was part of the notorious Jeffrey Epstein sex ring.

In February the prince paid Virginia Giuffre, the sex slave furnished to him by Epstein, $16 million in return for her dropping her lawsuit against him. The next month, on March 29, the queen chose Prince Andrew for a place of honor in her royal entourage as she commemorated the anniversary of the death of her husband, Prince Phillip, defiantly selecting Andrew for the high profile role of her escort in Westminster Abbey, knowing the photo of that escort would be published around the world, thereby demonstrating her contempt for the victims of her son and his crony, Epstein.

Elizabeth enjoys good press like her namesake Elizabeth I, who was steeped in the occult of her astrologer royal, Dr. John "007" Dee. The first Queen Elizabeth  is portrayed in Hollywood films as a paragon of decency, like the current monarch, who enjoys the unalloyed adulation of the media. Child molestation among the royals? Don't let it bother you, peasant.

The Cryptocracy has seen to it that the masonic Crown and royal house of England survived, while other hereditary monarchies were destroyed. In issue no. 117 of our newsletter Revisionist History®, the occultism and slave-trading activities of Elizabeth I and the prophecies for the longevity of the aristocracy of England are detailed.

Elizabeth made a fortune from the slave trade which her personal pirate, John Hawkins, pioneered under her commission.

She employed an expert torturer, Richard Topcliffe to dispatch as agonizingly as possible, dissidents who questioned the legitimacy of her rule. She tortured to death hundreds of them.

Furthermore, she made it a crime punishable by imprisonment to attend the Latin Mass upheld even by her father, King Henry VIII.  Attendance at the liturgy which her Church of England promulgated was mandatory. Absence was punishable with confiscatory fines.  (Revisionist History® no. 117, "The Pirate Queen's Slave Traders: Elizabeth I and the Conjuring of the British Empire," can be ordered here - scroll down to issue no. 117). 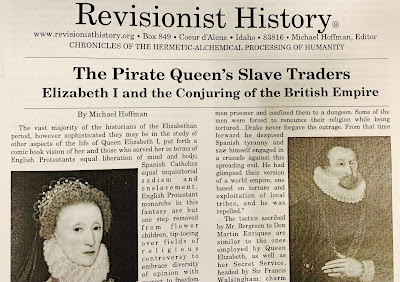 As the overcrowded little island of Britain drowns in a sea of immigration and its historic Christian faith is subsumed in a melting pot of other creeds often hostile to it,  as their freedom of speech is increasingly subject to draconian repression, it is more important than ever to "keep up appearances."

Hence, the bamboozled British people are treated to a revival of the spectacle of royal pageantry. By staging these elaborate ceremonies, a hypnotic impression is conveyed, reassuring the people that despite all the indices of decay, destruction and masonic oppression, "Things aren't as bad as they seem."

In the Society of the Spectacle, illusion predominates. There is no society in the West more spectacular than England when it fans the feathers of its "glorious" monarchy, enacting a ritual splendor intended to conceal the rot.

Michael Hoffman is a former reporter for the New York bureau of the Associated Press and the author of ten books of history and literature.

Your assessment isn't far removed from my own Michael!

With the dictatorial response to the pandemic by thuggish politicians the last couple of years now I've been left filled with a righteous indignation that not so much as a peep was heard from the Queen over the diabolical treatment her subjects were meted.

From the very Christian Bible she took her empty coronation oath on we see notable kings of Judah like Asa, Jehoshaphat, Hezekiah and Josiah distinguished as examples of righteous rulers who did what was right “in the eyes” or “in the sight of the LORD” (1 Kings 15:11; 22:43; 2 Kings 18:3; 22:2). Their moral reforms, including abolishing idolatry, sodomy, child sacrifice and other unspeakable abominations (1 Kgs 15:12; 22:46; 2 Kgs 18:4-6; 23:4-8) are in stark contrast to her decades-long reign that has seen her realm “progress” to the point of legalizing and promoting a mishmash of heathenism, homosexuality, abortion, euthanasia, etc.

This irks me to no end to witness the gradual twisting of our once free and peace-loving nations into the very similitude of those very dictatorships our forebears fought against in two world wars. And this woman, holding the highest position of power she does, to so deafeningly silently stand by in the face of growing injustice and oppression and passively consenting to the creeping tyranny being foisted upon us by our so-called “representatives” is much worse than stupid it’s dangerous for what’s been advancing throughout her “jubilee” reign is little more than the devil’s peace and like others better than myself have noted, “The only thing necessary for the triumph of evil is that good men (and women) do nothing.”