ON THE CENTENARY OF HIS BIRTH

The centenary of John Paul II’s birth (May 18, 1920) is being commemorated with the expected looney-tunes laurels for the pontificate of this prelatical Judas (1978-2005), the former Archbishop Karol Wojtyła of Krakow, Poland. 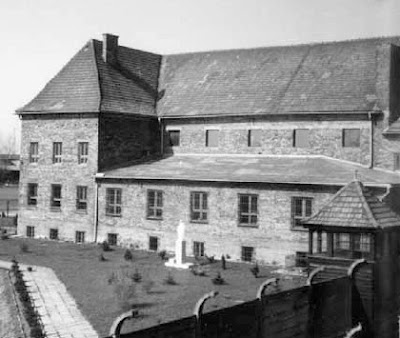 1992: The Carmelite nuns convent in Auschwitz, as photographed from Block 11 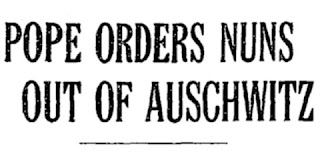 This is the pontiff who, in 1993, ignominiously threw the Carmelite nuns out of Auschwitz, where they had been praying for all victims, Judaic and gentile. The crosses which the devout Polish peasantry had erected around Auschwitz were dismantled, also by papal directive.

He was money-mad, like all the recent pontiffs, including that favorite of the “traditionalists,” Pope Pius XII who, in 1942, founded the money-laundering operation known as the Vatican Bank. It is officially titled the “Institute for the Works of Religion,” because, according to the Pharisee Hillel, the works of holy religion are necessarily founded upon debt-peonage and usury. In his Notes On the Correct Way to Present the Jews, promulgated June 24, 1985, John-Paul taught: “An exclusively negative picture of the Pharisees is likely to be inaccurate and unjust.” (Contrast this teaching with that of Jesus in Matthew 23:14-15).

Talk about the offense of suppressing the Council of Trent’s Latin Mass all you like, but the papal money mania is among the most egregious abominations of the post-Renaissance papacy. The dogmatic Catechism of the Council of Trent allows for not one farthing of profit above the return of the principal, on any loan. Oh, well, out the window with that disposable dogma, while oblivious “traditionalists” fight to the death for the restoration of the Latin Mass. These bipolar situation ethics breed more of the same, as we shall see. 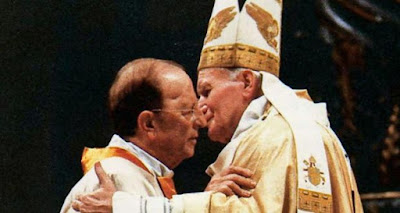 Moneybags Rev. Fr. Marcial Maciel was in special favor with John Paul. Father Maciel was founder-director of Mexico’s Legion of Christ society, “the greatest fundraiser of the modern Roman Catholic Church.” Therefore, long after he and his band of priestly perverts had molested hundreds of boys, and thirty of his seminarians sent urgent testimony to Pope John Paul alerting him to these crimes, the pontiff kept Maciel close to his pectoral cross, embracing and showering him with access and accolades, as the cash registers at the “Institute for the Works of Religion” filled with molester’s gold.

Beyond Fr. Marcial Maciel and the misnamed Legionaries of Christ, there were countless molestations of youth throughout the U.S., Ireland, Britain, Canada, Australia and Europe, of which John Paul was informed and about which he did nothing. Much of the horrendous child molestation that cost Rome billions of dollars in the pontificates of his successors, occurred during his papacy.

When Cardinal Bernard Law fled Boston, rather than risk facing prosecution for multiple counts of repeatedly facilitating the molestation of children by priests under his command, John Paul not only provided him safe haven in Rome, he awarded Law the prestigious post of Archpriest of the Basilica di Santa Maria Maggiore, an office which confers upon the holder citizenship in Vatican City, and therefore certain protections from extradition by foreign law enforcement. 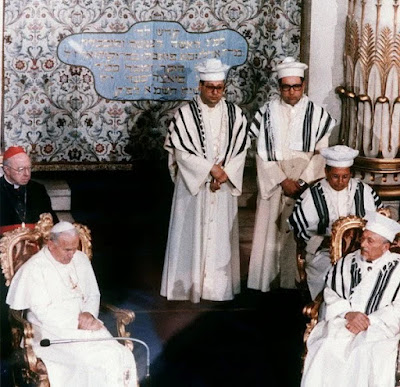 1986: A penitent Pope Saint John Paul the Great contritely bows his head to Grand Rabbi Elio Toaff at the synagogue in Rome

John Paul was a novel theologian. One of his novelties was his concoction of the doctrine that the followers of the Talmudic creed are “Our elder brothers in the Faith,” which, if you think about it, is a confession of the pope’s actual Faith, which certainly was not the Catholicism of the pre-Renaissance popes, or saints such as Vincent Ferrer. He obliquely condemned all of them after Rabbi Elio Toaff admitted him to Rome’s Great Synagogue, in 1986. There, the two sat on identical thrones. Speaking in the synagogue, John Paul denounced opposition to Judaism “at any time and by anyone. I repeat, ‘by anyone,” he said, in a statement that was interpreted (correctly), as a repudiation of every Catholic apostle, saint and pontiff who had fervently sought the salvation of Judaic souls through their conversion to Christ. John Paul insinuated that Judaics were saved by their race; an unscriptural, racist deceit compounded by the fact that many of them are descended of the non-Jewish Khazars, not Abraham. Is there a more pernicious act of Jew-hate than to swindle Judaic persons into imagining that they don’t need faith in Jesus Christ to be saved? (Matthew 10:5-7).

Also in 1986, John Paul II invited Buddhists and African witch doctors to the church of St. Francis of Assisi where a statue of Buddha was placed on the tabernacle and the pontiff joined in a parliament-of-religions group prayer. 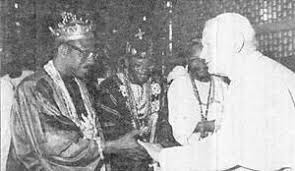 In 1993, in the course of his African “pilgrimage” to formerly Catholic Benin, he told the chieftains of voodoo in that country, that their idolatrous superstitions, which had held Black people in bondage for centuries, contained “seeds of the Word” of God (cf. L'Osservatore Romano, February 10, 1993).  After that favorable assessment was pronounced by “the Vicar of Christ on earth,” voodoo surged in Benin, and three years later the government conferred upon voodoo the status of "an officially recognized religion" (cf. Associated Press dispatch, January 11, 1996).

The fact that John Paul II was “infallibly” judged to be a saint, and canonized in 2014 by Pope Francis, an act “concelebrated" by 150 cardinals and 700 bishops, to the acclaim of an estimated 800,000 pilgrims present in Rome, and tens of millions of devotees around the world, tells us all we need to know about today’s bipolar “Catholic” Church.

Copyright©2020 by Independent History and Research


Michael Hoffman is the author of The Occult Renaissance Church of Rome (2017), and Usury in Christendom: The Mortal Sin that Was and Now is Not (2013)

The only good thing I can think of that came as a result of his pontificate was the stand that Archbishop Lefebvre made to preserve the Faith and save the priesthood by consecrating bishops. Assisi, the Felix Culpa, the Happy Fault for Tradition. Roger Slemmer

M Hoffman on Twitter: "Not one papist has disproved even one damning fact in our dossier on the Judas-Pope John Paul II:" Does this mean Hoffman is Orthodox?

Mr. Hoffman, please comment on the available evidence indicating John Paul II's haranguing of Irish bishops' reluctance to allow African immigrants to flood Ireland. It is said by many in Ireland that JPII was adamant that Ireland open its doors wide to Africans.This "fact" has been bandied about for years, though in a somewhat restrained manner (no doubt because a "saint" is alleged to be the culprit). All of that said, the pitiful state of present-day Ireland could not be worse if it had been planned to reach that state.

I have no information on Irish immigration vis a vis Pope John Paul II. Concerning third world immigration generally, I will say that when any people no longer have sufficient spark of life to reproduce themselves, and instead contracept and abort themselves out of existence, a vacuum is created which more fertile people from other lands, will fill. Nature abhors a vacuum. The fault is in our suicidal, self-extinguishing selves.

Second, during the recent pontificates of Pius XII, John XXIII, Paul VI and John Paul II, Irish children were being raped, molested, and at certain youth homes, killed; a murderous fact facilitated and covered up by Ireland’s prelates and the popes. This has been the major factor contributing to the astonishingly rapid transformation of Ireland from a Catholic nation that reproduced itself, to a nation that is virtually anti-Catholic and militantly embraces abortion, contraception and the transgender revolution.

These and other Renaissance and post-Renaissance pontiffs are not Catholic. They have served as agents of the Neoplatonic-Hermetic gnosis. Their objective has been to destroy the Church of 1500 years' duration. See my book, “The Occult Renaissance Church of Rome” for the whole story.