Those Catholic kids and the American Indian

Those Catholic kids and the American Indian

A textbook case of racial tension encouraged by the System

Divide-and-conquer is the preferred tactic of the Sanhedrin 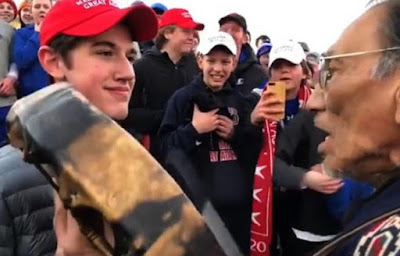 The latest media tempest-in-a-teapot concerns Catholic teenagers from Kentucky set upon by the media and made to star in the perpetual Hate-Whitey videodrome, wherein, whether it’s a Gillette shaving commercial, or kids waiting for a bus after a pro-life, anti-abortion march in our nation’s capitol, they are cast as KKK/Nazi bigots. Of all the crimes and travesties in our land today, this minor incident between Indians and Catholic school kids is the event that propels the liberal outrage machine. Forget the mass extermination of disabled Down syndrome children with abortion, forget the forced conversion of children in our public schools to disease-inducing anal “gay” sex, forget female impersonators dictating an Orwellian regime on college campuses wherein “he" must be referred to as “she," otherwise the truth-telling offender who terms the ersatz gal a guy, is demoted or fired from the faculty or administration.

It’s a truism that the inmates are in charge of the asylum. They are well on their way to transforming all of us into insane persons in their corporate world of relentless revolutionary change. Thankfully, the scapegoated, stigmatized Catholic youths are fighting back and showing some backbone, as noted below. That such a pitch of media hysteria could be invoked over a white kid merely staring at a Native American is more than ridiculous. This hyper-sensitivity to the least perceived slight to the new aristocracy of color is a revelation of the degree to which our media masters yearn for, indeed ache for a KKK or neo-Nazi group to attack minorities while the news cameras record it. Shaming white people is Job #1. Instilling self-hate is a psychological warfare device, a type of mental genocide that is underway 24/7 in America.

In the final analysis, let us not imagine that the Zionist ruling class actually cares about the welfare of non-whites. They are merely cannon-fodder on the road to a neo-Bolshevik America. The Israelis have butchered tens of thousands of native people of color in Palestine without any sustained exposure or protest from the U.S. media. The Orthodox Judaic religion teaches that black people are a divinely designated slave race (cf. the Midrash on Genesis in the Soncino edition), and sub-human (cf. Moses Maimonides, The Guide of the Perplexed, vol. 2, in the Shlomo Pines edition). These rabbinic dogmas have caused the black race untold suffering and misery throughout history.

Meanwhile, the Cryptocracy has used the white race as its golem in Afghanistan, Syria and Iraq.

The Cryptocracy manipulates people of color to serve as golem in the United States, disseminating a view of American history that portrays the majority of whites as whip-wielding tormentors of colored people in bondage, when the truth is that the vast majority of whites in early America were, as Congressman David Wilmot termed them, “the sons of toil.” Many arrived in this country in chattel bondage, not dainty “indentured servitude.”

The clandestine objective of crowding whites into ever more narrow psychological categories of self-abnegation and erasure, is to inflame them into lashing out desperately with inchoate violence that can be exploited to further justify ever greater encroachment by the government on our immemoral rights, and the escalation of increasingly intense negative caricatures of conservative white people issuing from the salons of Hollywood and New York.

The only ones who will emerge mostly unscathed from this contrived race war will be the same ones who emerged largely unscathed to rule in Vladimir Lenin’s Bolshevik Russia, a century ago.

Whites, Blacks and Native Americans cannot be allowed to join together in opposition to the empire of usury which is choking life on this planet. Divide-and-conquer has always been the watchword of the Sanhedrin. Whites with their affinity for Neocon war-Zionism, and Blacks with their partiality for the Democratic party of sodomite supremacy, non-educating public schools and unlimited cheap labor from south of the border, remain unconscious, easily manipulated golem of the six-pointed System.
__________

In addition to the report below, we recommend Rod Dreher’s incisive analysis here: https://www.theamericanconservative.com/dreher/the-covington-catholic-bonfire-at-the-stake/

The following is by Jonathon Van Maren of Lifesite News
https://www.lifesitenews.com/blogs/anti-trump-media-touts-fake-news-to-whip-up-mob-against-pro-life-kids.-they

CNN, followed by the rest of the media lynch mob, has reported that a bunch of MAGA-hat wearing kids from Covington Catholic School in Kentucky had swarmed an elderly Native American man at the Lincoln Memorial following the March for Life in Washington D.C., chanting slogans like “build the wall.”
Social media promptly exploded, with commentators of every stripe condemning the kids for being jackasses (which, if the short video clip released by the media was the entire story, would be the case). A number of pro-lifers followed suit, ostensibly in order to shield the movement from criticism and ensure that the entire March for Life was not tarred by the incident.
Things got ugly quickly. Journalists and pundits began to release photos of the high school boys next to images of white racists mobbing black civil rights activists at lunch counters in the 1960s. Some even compared the boys to the fresh-faced thugs of the Hitler Youth. One writer at Slate.com noted somberly that the facial expression of Nick Sandmann, the now unfortunately famous young man facing off with indigenous activist Nathan Phillips, was familiar because we’d seen his type before: Young, cocksure, powerful – and evil.
Nobody, apparently, considered the fact that the image was simply one freeze-frame shot of an uneasy and awkward teenage boy thrust into a situation he didn’t know how to deal with. The media and the rest of the progressive mob badly wanted this story to be true: A pack of racist young white Catholic school boys sporting Trump hats following an anti-abortion march mobbing a Native American man? It was just perfect.
Too perfect, as it predictably turned out. Reason was the first publication to release a detailed rebuttal of the narrative, noting that when the nearly two hours of video footage of the incident was viewed – something the media presumably should have done before setting out to destroy the lives of some high school boys – a notably different story emerged.
Soon thereafter, Nick Sandmann released a statement begging people to hear he and his classmates out. Here it is in part:

Many of the commentators who joined the initial pile-on have begun to retract their statements in view of the evidence. Jake Tapper of CNN tweeted out the rebuttal column by Reason, Scott Adams of Dilbertissued an unqualified apology to the boys and those who were misled by his initial condemnations, and conservatives and pro-lifers who had initially rushed to join those expressing outrage indicated their regret for doing so. A few media outlets such as NBC even released follow-up articles noting their initial mistake. Progressive indignation, however, continues to rage across social media. A few media figures, like Reza Aslan (who last made news for eating a piece of human brain in India), have been doubling down, insisting that it is crazy to believe that nuance might be necessary in a story where MAGA hats are present.
The boys and their families are already facing threats, vile name-calling, and doxing, which is apparently how some vile people show their disapproval of actions they consider unloving. Andrew Hodge, the brother of one of the boys, noted on Twitter that his family and relatives are facing nonstop threats of physical violence, and that nobody contacted his brother for the other side of the story before running with it—and some people are even attempting to contact the college Michael plans to attend in order to destroy his career plans of being a chef. There are many, many people out there right now who are trying to completely ruin the lives of a few high school students, and it is disgusting to watch.
It would be disgusting even if the original story had been true. Utterly wrecking the lives of high school kids because of a moment of indiscretion (and the MAGA hats on a school field trip were a questionable decision) is malicious, counter-productive, and shameful. Those joining social media mobs to supposedly combat evils such as racism are in fact acting in the service of hatred, which is revealed clearly by the fact that they seek only to destroy. The media, of course, gets their clicks and the viral videos and their virtue-signalling and then moves on. Even if the story turns out not to be true, it will have been very profitable for them nonetheless.
I hope we can all learn a lesson from this incident. The media, as usual, is willing to jump at the chance to smear those they have contempt for: Pro-lifers, conservatives, and Trump supporters. We should consider their biases and their track record before we instinctively believe their stories about people they despise, and before we join the social media pile-on. And the media, I hope, can take a long, hard look in the mirror and realize that real people paid real consequences for their irresponsible reporting this weekend. Kids got death threats. Families had their addresses posted online. High school students saw strangers try to destroy their future plans. And it isn’t over yet. That is what happens when the media gets a story wrong. There should be consequences….
__________
Posted by Michael Hoffman at 1/21/2019 09:40:00 AM

Thank you for excellent comprehensive article.
I reposted link at

This how THEY create "HATE SPPECH" and "HATE CRIME" .

I recommend not even doing street protests these days because we see how they are twisted and ruined by the MSM.

Also think ignoring everything that comes out of the mainstream media completely. Our attention, good or bad, is fodder for their evil.

I applaude the students, they stood graceful in the face of unbridled bullying.They learned first hand, that liberals do not play fair, and could care less if their actions were wrong/harmful.Good luck in your future plans.