The Lost Secret of Luther's Reformation

"Fake news" is a derivative of our having been conditioned to fake history.

In issue no. 93 of Revisionist History newsletter we will be studying "Jesse James, Abraham Lincoln and the Lost Secret of the Civil War." That secret pertains to why the war was fought by enthusiastic Northern troops in the Union Army, most of whom were abolitionists because they were white nationalists. It's one thing to make that statement and another to document it. We're going to try in issue 93, which should go on sale toward the end of next week. Subscribe now and start your subscription with no. 93.

In the same issue, we will continue tracking the trail of a serpent, situation ethics — surveilling the progress and impact of the Babylonian Talmud’s doctrine of situation ethics at its most raw and destructive form in terms of the infiltration of the  Church. To do this it is necessary to step on toes and shatter cherished iconic mythologies.

What is the Lost Secret of Luther's Reformation? 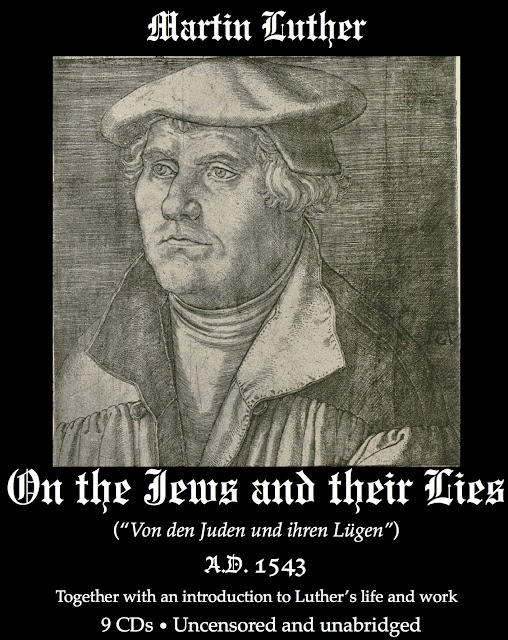 What is the Lost Secret of the Reformation? Luther's revolt is most often explained in terms of an obtuse and occluding bumper sticker slogan, “The sale of indulgences." In truth and from his own fiery words, we learn that he was so obstinately loyal to medieval Catholicism, unlike the Renaissance papalists who had overthrown  it, that he would not yield to situation ethics as it manifested in the usury and Judaism which was gaining firm purchase inside the highest echelon of the Church of Rome.

Fake history suppresses the inconvenient truth that in order to enable the usury profits of the mortally sinful Fugger and Medici banks, Pope Leo X, who was himself a Medici, weakened the immemorial ban on usury, which sent Luther into a paroxysm of rage against the papacy for betraying 1500 years of immutable Biblical-Patristic and true Catholic dogma against the renting of money. Luther thundered clearly and unequivocally:

"He who lends expecting to get back something more and something better than he has loaned is nothing but an open and condemned usurer.”

With his uncompromising stand he won the hearts of many Germans who were shocked and aggrieved by the pope's role in empowering the hated Fugger usury operation in Germany.

You are not likely to hear or see a word of these facts in the ocean of broadcasts and texts that are being issued in connection with the 500th anniversary of the promulgation Luther's 95 Theses.

You may hear it said that Luther was "anti-Semitic" (which he certainly was not —  he had no animus toward Judaic people; his Biblical theology was not an antecedent of Nazi ideology).

Luther did have a bone to pick with the Talmud and once again, in part because the papacy of his time had been behind it.

"But the popes burned the Talmud!" some will reply.

That riposte reminds this writer of criticism of my book on white slavery in early America, "But whites were only indentured servants!” That’s a half-truth which fails as history because it fails to make distinctions. Whites who were in bondage in the 17th century in British America were mostly slaves; whites who were in bondage in 19th century America were mostly indentured. 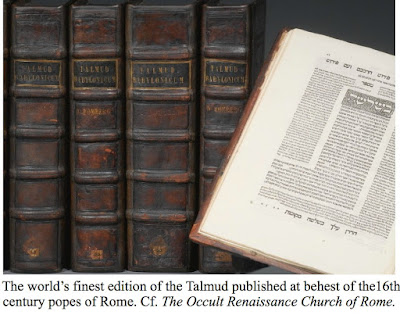 The Talmud was certainly not burned under Leo X or Clement VII, or the other early 16th century popes. On the contrary, it was advanced.

Only after Renaissance Rome had clandestinely sponsored the publication of the finest, most magnificent edition of the Talmud in world history, and fixed its canon thereby, preserving it as a basis for the survival and extension of rabbinic Judaism in the West — did Rome decades later, stage a few theatrical Talmud-burnings — in one case, documented in The Occult Renaissance Church of Rome, in a Machiavellian trade-off wherein hundreds of copies of the Kabbalah were saved from destruction by means of a diversionary burning of the Talmud. Welcome to Vatican chess.

Rome’s covert alliance with Talmudism derived from the plague of “Catholic” occultism which had been cultivated in mid-15th century Florence and subsequently infecting much of the Church hierarchy. This was no secret to Martin Luther. As with the papal permission for usury, once again he reacted with a smoldering fury which culminated in 1543 in his incendiary book, Von den Jüden und ihren Lügen, which contains not one bigoted racial disparagement of Judaics as Judaics — but page after page of highly informed, Bible-based and medieval-Catholic consonant, deprecatory analysis of the anti-Biblical iniquity and deception in the Talmud.

All this is a prologue to the real history of Martin Luther's Reformation, upon which we will expand in Revisionist History no. 93. Watch this space for details.

In the meantime, meditate on this mind-blower: with regard to defenestrating the Money Power and and its Talmudic progenitor, Martin Luther was far more Catholic than the Neoplatonic-Hermetic-Kabbalistic popes of his era.

Michael Hoffman is a leading scholar of the western secret societies and the history of ideology in early modern Europe and Britain.

Mr. Hoffman, I'm eagerly anticipating your newsletter. The defenstration is appropriate given how many truth seekers have been defenestrated in years gone by. God grant all of us the fortitude to seek and know the truth no matter where it may lead. Christus Vincit, Christus Regnat, Christus Imperat.

Michael, excellent account. You might find my essay worth a read. 500 Years of a Protestant Reformation http://batr.org/solitary/103117.html

Dr. Hoffman, would this mean that Martin Luther was very similar to the sedevacantist catholics of today ?