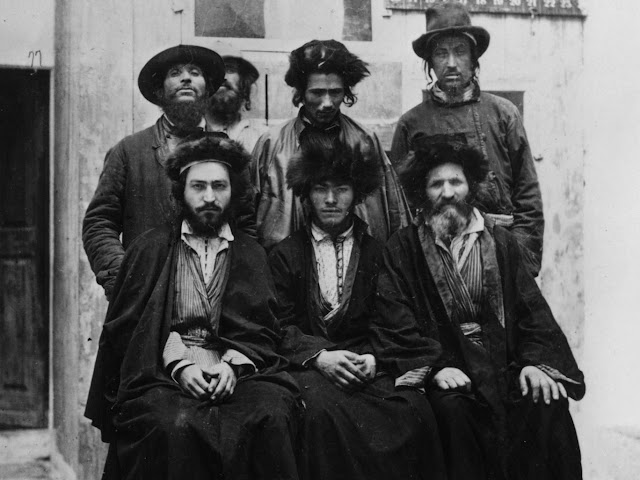 Turks in Jerusalem in 1855 masquerading as Jews.

The majority of the world’s "Jewish" population is descended mainly from people from ancient Turkey, rather than from the Middle East. New research suggests that the so-called “Jewish” population of eastern Europe – known as “Ashkenazic Jews” – are descendants of Greeks, Iranians and others who colonized what is now northern Turkey more than 2000 years ago, and were then converted to rabbinic Judaism. These findings have been put forth by Israeli-born geneticist, Dr Eran Elhaik of the University of Sheffield.

Dear Mr Hoffman, With respect but you must go the true source for racial origins of the Jews i.e. The Holy Scriptures.

Royal JUDAHITE Israelites to King David and Yashua Messiah (Jesus Christ) are from JUDAH and TAMAR who was of Abrahamic blood, again as recorded in Genesis 38.

The so called Khazars were/are Turkish Edomites who were from Esau and his Canaanite wives, so are not racial Jews. However many converted to Judaism and became religious Jews.

To be a Jew one must be a descendant of Judah and his Canaanite wife.

Tamar was herself of Canaanite descent.

Not so, Tamar was of Semitic blood, not Hamitic Canaanite blood.

When viewing contradictory comments regarding the works of not only published researchers but researchers dealing with depraved subject matter, probing the depths of Jewish historical psychopathology as does Mr. Hoffman, such comments should be viewed as being of "janitorial quality" to quote a famous European historian.

Mr Hoffman, According to the title of your post,there are jews with rights to the land of palestines? Why?
Deborah

On second thought the title doesn't necessarily imply that as such, imho

yes2truth said...
'Not so, Tamar was of Semitic blood, not Hamitic Canaanite blood.'
How do you know that ? Did you see her birth certificate ?