Salafist Islam may destroy our bodies, but Zionist Hollywood destroys our souls

Look at what the usual suspects who control Hollywood (as Marlon Brando said, and Neal Gabler wrote) have done to Christmas this year: 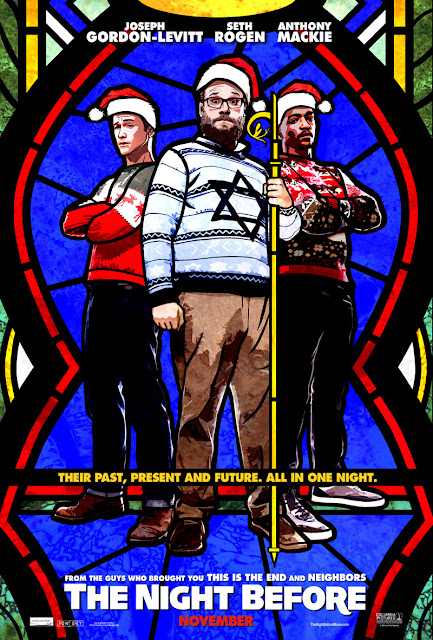 On Christmas Eve Talmudic Judaics are supposed to refrain from their studies to mourn the birth of evil Jesus. To demonstrate their contempt for Christ they are even encouraged to make toilet paper on Christmas Eve! I don’t know what other religion other than the Church of Satan would encourage such a disgusting custom, but as difficult as it is to believe, it's a documented fact.

The cinematic equivalent of the rabbinic toilet-paper making tradition, is a 2015 Christmas movie, “The Night Before,” timed to appear in America’s theaters in the Advent season. The movie was produced by Seth Rogen and directed by Jonathan Levine. It stars Rogen and Joseph Gordon-Levitt.

Here’s an excerpt from the Los Angeles Times' review titled, "The Night Before’ Adds a Little Something Extra to Christmas movies and Midnight Masses”:

“...a curly haired Jewish boy has arrived to remind us of the reason for the season. I’m talking, of course, about Seth Rogen, who stars in and produces 'The Night Before,' a raucous and refreshing new take on the Christmas movie....From a cocaine-fueled diatribe of anxiety in a bar bathroom to a midnight Mass meltdown wearing a blue Hanukkah sweater, he somehow manages to convey vulnerability while behaving like a lunatic. It is Rogen’s particular gift to seem decent while puking in church.”

When do the media consider hate speech "raucous and refreshing”? Answer: when Christianity is the target, and the speech — in this case a movie — bears a remarkable affinity for the spirit behind the rabbinic “minhag” of degrading Christ during the season that commemorates the feast of His birth.

None of this would be possible in an Islamic nation or any civilized nation for that matter, but here it is on the big screen at your local movieplex, in the land of the “God bless America” bumperstickers, where super-patriots point fingers and accuse Russia and Iran of being founts of evil.

The founts of evil who cooked up the toilet paper-making on Christmas Eve passed their mentality onto their spiritual children in  Hollywood and “The Night Before” is the result, here in the land of el Cesspool grande.

This column is available as a pdf. file for printing and distribution

This column is made possible by donations from readers and the sale of Michael Hoffman’s books, recordings and newsletters.

The US has become the great devil nation of the world. Two thirds of their citizens are fat, 70% on on medications, most never read anything, but spend six hours per day watching TV, vote for war mongers consistently, lead the world in STDs, abortions, divorce rate and imprisonment, and worship the Jews (money). Exactly what Christianity is there inside the US that could possibly be offended by anything?

Ban any theater that shows this movie!

I've pretty much given up on watching comedies anyway. Too much gross out humor and predictable plots.