ANNOUNCING OUR LATEST NEWSLETTER
Now being mailed to subscribers 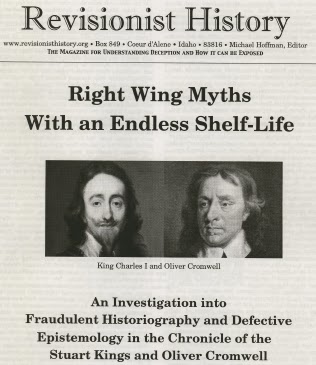 20-page magazine format. Our biggest issue of the year!


Were the English Puritans who overthrew King Charles I agents of the Judaic Money Power?

Did Oliver Crowell readmit the Judaics to England?

Many non-Zionist Right-wingers believe the answer to all three questions is yes.

It is our hope that uncovering these Big Lies will serve to illustrate a defective epistemology, what is known in cognitive psychology as confirmation bias. This is the act of seeking only those details and viewpoints which confirm the biases we hold dear, and about which we have formed a pre-judgment, independent of the documentary record. Right wing myths have disoriented our minds, nearly destroyed our spirits and imparted so much confusion that many of our people, in spite of good intentions, have been rendered almost totally ineffective in this Great Battle.

Throughout history deep-cover forces of the Cryptocracy have co-opted personnel and organizations we imagine are on the side of the good and the true. The more our people burn out from suckering in for these counterfeits, the more they fail to show up for battle. In this issue we investigate one particular set of these counterfeits, the better to hone our powers of discernment. By offering training in the detection of counterfeit history and the extent to which we have been snookered by respectable, highly esteemed authors such as Hilaire Belloc, and Capt. Archibald Ramsay in his book The Nameless War, we hope to inoculate our readers against the legion of Right wing dupes and one-track minds churning out misleading and erroneous data which engenders confusion and tends to discredit us.

Let's build a movement comprised of energized, optimistic, smart, victors.
Revisionist History no. 74 is a first step on that path!

Order a single copy of this issue no. 74

Or save money by subscribing and starting your subscription with this issue no. 74