There is now an extremist, racist ideological current in Israel that not only justifies the recent onslaught on the Gaza Strip, but actually encourages the use of enormous and disproportionate violence against civilians, which has led to the extermination of entire families. 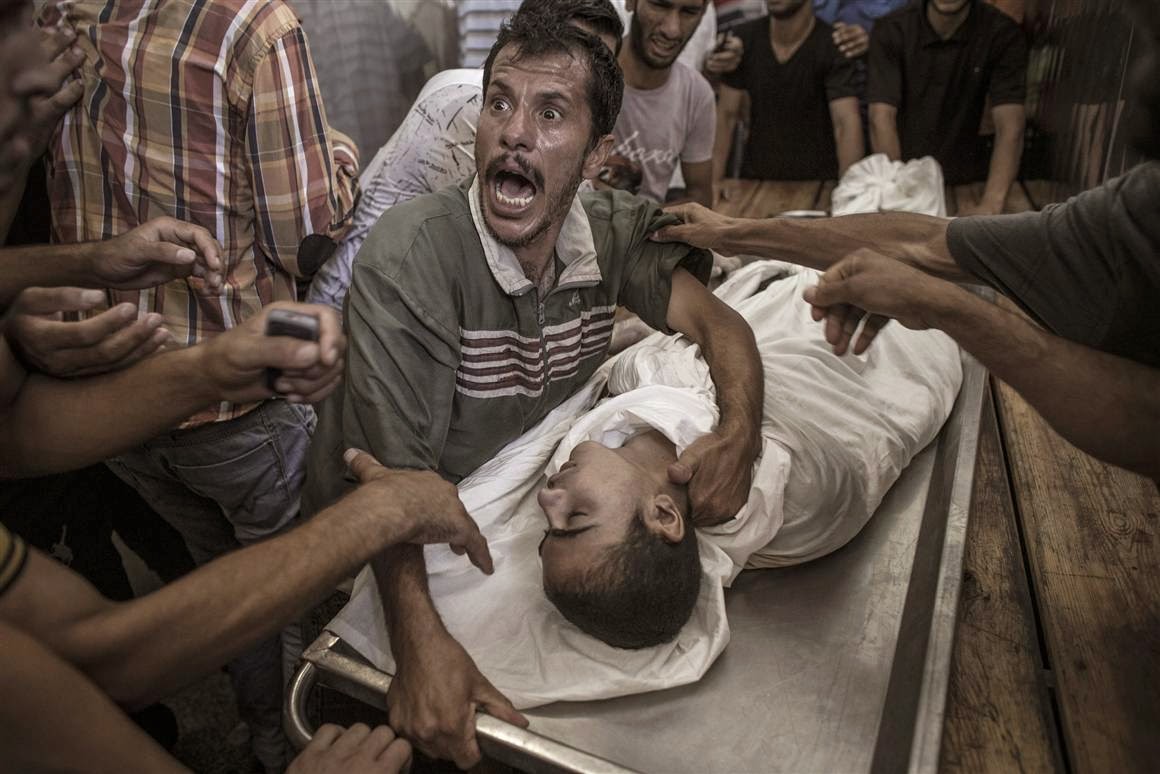 A Palestinian father mourns his son who was killed Aug. 3 in the Israeli bombing of a United Nation shelter for civilians in Rafah. A Palestinian father comforts his son after their relative was killed in the Israeli bombing of a United Nations shelter for Palestinians in Rafah, Aug. 3.

RAMALLAH, WEST BANK — Centuries of European colonialism have provided the world with certain basic lessons about subjugating colonized peoples: The longer any colonial occupation endures, the greater the settlers’ racism and extremism tends to grow. This is especially true if the occupiers encounter resistance; at that point, the occupied population becomes an obstacle that must either be forced to submit or removed through expulsion or murder.

In the eyes of an occupying power, the humanity of those under its thumb depends on the degree of their submission to, or collaboration with, the occupation. If the occupied population chooses to stand in the way of the occupier’s goals, then they are demonized, which allows the occupier the supposed moral excuse of confronting them with all possible means, no matter how harsh.

The Israeli occupation of Palestine is one of the only remaining settler-colonial occupations in the world today.

And it is not limited to East Jerusalem and the West Bank: Although Israel withdrew its settlers and army from Gaza in 2005, it is still recognized by the United Nations as an occupying power, due to its complete control of Gaza’s airspace, sea access and of almost all of its land borders.

Over the years, Israel has used all forms of pressure to prevent the Palestinians from achieving their national rights and gaining independence. It hasn’t been enough for Israelis to believe their own claims about Palestinians; they have sought incessantly to impose this narrative on the world and to have it adopted by their Western allies.

Unsurprisingly, all of this has led to complete shamelessness in mainstream Israeli rhetoric about Palestinians. After all, if one is not held accountable, then one has the freedom to think — and do — what one wants. With no internal or external checks, one can act with impunity.

The Israeli left is a relic, all but extinct, and the extremist right is entrenched in the Israeli political establishment. Attacking the Palestinians has become officially sanctioned policy, embedded in Israeli public consciousness and politely ignored in Western political circles.

There is now an extremist, racist ideological current in Israel that not only justifies the recent onslaught on the Gaza Strip, but actually encourages the use of enormous and disproportionate violence against civilians, which has led to the extermination of entire families.

Moshe Feiglin, deputy speaker of the Knesset, recently called on the Israeli army to attack and occupy Gaza, paying no heed to anything but the safety of Israeli soldiers. He then demanded that Gaza be annexed to Israel, and asked the army to use all means at its disposal to “conquer” Gaza, by which he meant that obedient Palestinians would be allowed to stay, while the rest — the majority — should be exiled to the Sinai Peninsula. This cannot be understood as anything less than a call for ethnic cleansing.

Ayelet Shaked, a Knesset member for the Jewish Home Party, a member of the governing coalition, called on the Israeli army to destroy the homes of terrorist “snakes,” and to murder their mothers as well, so that they would not be able to bring “little snakes” into the world.

And Mordechai Kedar, a professor at Bar Ilan University, publicly suggested that raping the mothers and sisters of “terrorists” might deter further terrorism. * The university did not take any measures against him.

Such statements are no longer isolated incidents, but reflective of the general sentiment within a country where chants of “Kill the Arabs” are increasingly common. It is no longer an aberration to hear these opinions expressed in public, or by politicians and academics. What is unexpected — and unacceptable — is that such statements are not met with any sort of condemnation in official Western circles that claim to oppose racism and extremism.

The rise in Israeli racism and extremism against Palestinians would not have happened without the unconditional support that Israel receives from its allies, most significantly the United States.

Israel cannot continue to be the exception to the rule of international law and human rights. The international community must hold it accountable for its rhetoric and its actions, and begin to treat it like all other countries. It should not be allowed to continue to enjoy its state of exceptionalism and to use this to wreak destruction on the Palestinian people.

After 47 years of occupation, two decades of stalled peace talks and almost eight years of a strangulating siege of the Gaza Strip, the international community must demand that Israel clearly state what it intends to do with its occupation of the Palestinian people. Since the Palestinians are not the occupiers, but rather those living under occupation, this question cannot be asked of them.

What the Palestinians are enduring today in Gaza should be a clarion call for the entire world to end the bloodshed. But it will take more than a cease-fire. It will take peace. And peace cannot happen without an end to the occupation.

This article was published in the New York Times on Aug. 4, 2014. It was translated from the Arabic by Ghenwa Hayek. Emphasis and links are supplied by On the Contrary. 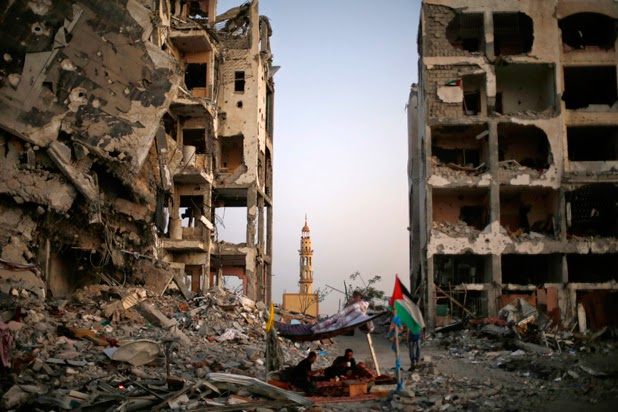 Aftermath of the Israeli bombing of a neighborhood in Gaza, August, 2014

* This is the first mention in the NY Times of Israeli Prof. Kedar’s repulsive “rape the Palestinians” remarks, since his views were first reported July 22 by independent news pages online. His despicable observation deserves a full report and exposé in the Times, not just a passing reference buried in the eleventh paragraph of an Op-Ed. On July 13, the Times gave massive, front page coverage to a rape that was said to have occurred at a small upstate NY college, and then published two more follow-up reports about it. The Times claims to be deeply concerned about a culture of rape on American college campuses, but took 13 days to even mention (much less report) the Israeli professor who teaches at a heralded Talmudic university, who publicly states on Israeli radio that raping Palestinian women is the only effective deterrent against Palestinian armed resistance.

However, let the record show that the article by Jarbawi mentioning Kedar was not published in the print edition of the New York Times distributed in the U.S. It was published only online and in the printed International edition. It was omitted from the US print edition, which still has the majority of the readers of the Times, who will not see even a passing mention of the outrageous Israeli rape-as-a-deterrent doctrine.
_____________

Addendum: “People cannot flee from Gaza; Israel and Egypt keeps their borders virtually sealed. Residents can flee their neighborhoods, but even United Nations schools being used as shelters in Gaza have come under deadly fire. And in downtown Gaza City, where Israel has urged people to go for safety, Israeli airstrikes have repeatedly hit apartment buildings packed with residents and refugees. One strike collapsed most of a building and killed the family of a bank employee who had moved to Gaza City because of Israeli instructions.” — Anne Barnard, NY Times online August 4, 2014

"If the Israelis had slaughtered as many animals in the San Diego Zoo as they killed  Palestinian civilians in July and August, Americans would be up in arms in rage and protest.” — Michael Hoffman

It's not just racist ideology, it's psychopathy, pure and simple. Hannah Arendt noted that Jews were complicit in the "Holocaust", and the ones that were selected to be transported to Israel were mainly gangsters and criminals.

There is now an extremist, racist ideological current in Israel …

It appears that that the price of NYT admission for Ali Jarbawi was to defer to the ruse that what we're witnessing in Gaza is some new phenomenon; a 'right wing' takeover of formerly compassionate, tolerant democratic, enlightened, progressive 'Israel.' He certainly knows the racist ideology-feuled extermination has been ongoing since well before the founding of Counterfeit Israel.