The Wall Street Journal and the New York Times, publishers of a blizzard of disinformation on the killing of our President, dare not mention any of these important sources of information on the conspiracy behind the killing. Books Michael Hoffman regards as particularly indispensable for study are marked with an asterisk (excluding his own study in the 69th issue of Revisionist History newsletter).

*Feister, Sherry, Enemy of the Truth: Myths, Forensics, and the Kennedy Assassination (2012).

*Fonzi, Gaeton, The Last Investigation: What Insiders Know about the Assassination of JFK (New York, 2013).

Photographic evidence of the conspiracy to kill our President: 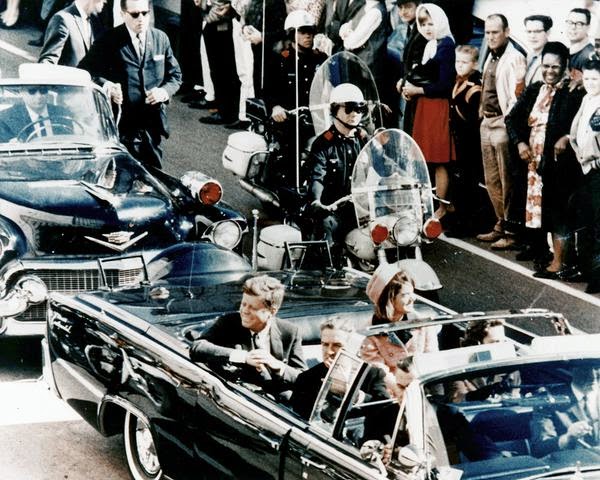 The sitting duck: Secret Service agents withdrawn from the back of his limousine; motorcycle escort pulled back: no motorcyles along his side. According to testimony of the agents themselves and contrary to establishment propaganda, the withdrawal was not done by order or request of President Kennedy.

Neither will CNN or NBC publish or broadcast anything that mentions these resources.

The only counter that I've noticed so far are certain premium television channels broadcasting a few JFK documentaries that at least expose the motive that certain interests would have had in assassinating the president. There are also curiously multiple showings of Michael Moore documentaries; which while not focusing on JFK, illustrate the ways in which business interests and defense collude to produce an occult, fascist government.

Mr. Hoffman,
You may be interested in James DiEugenio's article from 11/11/13 posted at the Citizens For Truth About the Kennedy Assassination (CTKA.net) in regard to Anthony Summers called "When Tony Summers Fell In Love with Patricia Lambert." It's a hard-hitting article, with some fascinating information, at this link:

DiEugenio states that Summers' first printings of "Not in Your Lifetime" are the better ones, when the title was "Conspiracy." Apparently, Summers had a change of heart with later publishings.

I agree about Summers. His deprecation of Jim Garrison is particularly troubling.