Latest bans on Michael Hoffman and his Usury book 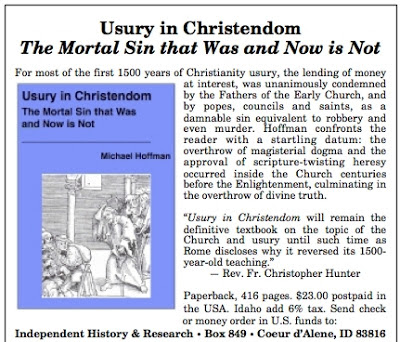 Advertisements for Michael Hoffman's book Usury in Christendom: The Mortal Sin that Was and Now is Not are banned from the pages of The American Conservative magazine. Advertising director Ronald Burr informed Independent History and Research on May 15 that The American Conservative will not accept an ad for the book. No reason was given.  (1710 Rhode Island Avenue NW, Suite 1200, Washington, DC 20036. Tel.  202-955-3600. letters@theamericanconservative.com)

One wonders how the comparatively small American Conservative magazine hopes to attract the blessing of Providence and gain a wider audience when it is so timid?  Usury in Christendom is just what its title indicates, an exposé of the heretofore neglected subject of gentile usurers, not Judaic ones (since so much has already been written about the latter to the exclusion of any investigation of the former). Ergo, our “offense” cannot lie in the content of the book, but in the maligned reputation of its author, who is routinely libeled as an “antisemite holocaust denier.” Why would a national publication risk the howls of a slew of Zionist enforcers by running an advertisement for a new study of the Money Power, penned by a pariah? The debacle is doubly dismal in that the magazine’s editor, Ron Unz, is an otherwise sage wordsmith who usually has something of value to say. Of the prevalence of fraud in American society, Mr. Unz opines: “Credibility is a capital asset, which may take years to accumulate but can be squandered in an instant; and the events of the last dozen years should have bankrupted any faith we have in our government or media.”

It's hard to square his assessment of “government or media” with what we know is his magazine’s policy of blocking advertisements for books by stigmatized revisionist researchers. Yes, Mr. Unz, credibility is a capital asset and it can indeed be squandered, with just a single ban on a book.

Since November we have mailed approximately fifty review copies of Usury in Christendom to history magazines, literary journals, university professors, theology associations, Protestant ministers and Catholic priests, both in the U.S. and overseas. We continue to hope and pray that one or more of these will take notice of the book in their respective publications, institutions and churches.

Reviving the ancient struggle against usury--it doesn't get more conservative than this.

However, I’m on a blacklist that “The American Conservative,” despite all of its anti-establishment bluster, is too timid to defy. Their readers are the losers. They think that by subscribing they’re getting access to exciting and original alternative views. But someone flea’d the lions rump and pared his claws.


Due to this, I will no longer read TAC.

Mr. Hoffman, I believe a major factor is the adoption of the pseudo-religion of holocaustianity in the public indoctrination centers (schools). Speaking from personal experience in the 1980s while in public grade school criticizing ANY Jews or Israel was one of the untouchable subjects. Millions were exposed to this indoctrination and will never change. Plus no one is trained in rational discourse or classical logic so when the accusation of "anti-semitism" is hurled many have been trained to react negatively and strongly without employing any reason whatsoever.

Also, I wanted to add this story about the deaths of infants by Herpes infections after the bizarre Hasidic circumcision rituals you described in this blog. They were infected by the rabais and later died, there have been 13 deaths documented since 2000.

This is the reason I didn't renew my subscription to the New American. Their appeals to renew are run through the shredder.

Congrats to 'The American Conservative' and 'New American' and the ISOC.

By taking such action they effectively out themselves as whores of the banking elite.

I purchased and have nearly finished your book, Michael. I'm pretty well convinced at this point that it all begins with usury - it is the mechanism that funds all their other endeavors; be it the media, politics, or social engineering. Strip them of the ability to grow fat off usury and the house of cards tumbles.

ISOC is not 'banning' you, they simply did not invite you to speak! Pehaps they didn't because they already have a fine speaker talking on usury, Dr Santelli (who, incidentally, is uncompromising in his position on the sinfulness of usury). Please stop assuming that absolutely everyone is out to get you!

In the future please choose your own name or an alias to publish under. We do not accept anonymous comments but we made an exception in your case.

The fact of the matter is that the organizer of the conference claimed that they did indeed want to invite me to speak, but could not afford to pay for my air fare from Idaho. This week a third party came forward and notified them that he would pay for my air fare. They have not, thus far, replied to his offer and that is where the matter rests as of Aug. 1.

As for Dr. Santelli: whether or not he regards usury as sinful is entirely beside the point. My thesis is that the Church began to incrementally permit the mortal sin of usury from 1515 A.D. onward. Moreover, meaning no disrespect to Santelli, I draw your attention to the datum that he is a hedge fund manager.