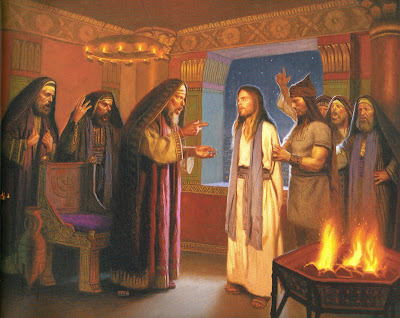 Christ our passover has been sacrificed, alleluia: therefore let us keep festival with the unleavened bread of sincerity and truth” (I Cor. 5: 7-8).

Modern people think they know the answer to the question, "Who killed Jesus Christ?" They answer as they have been indoctrinated: all of our sins killed Jesus generally, and the Romans in particular were responsible. No other malefactors are specifically cited, except perhaps for a fleeting mention of a generic class of leaders, the “Chief Priests,” and a vague tribe referred to as “the people."

Our sins did indeed contribute to the anguish, torment and death which Jesus suffered, and Pontius Pilate is a stand-in for every weak, compromising Lunchpail Joe and Retirement Harry throughout time who will only try to do the right thing if it doesn't cost them personally. Pilate's wife put a harbinger of spiritual doom in Pilate's ear, but the Jewish mob took the starch out of Pilate's spine when it served up a more immediate threat for him to contemplate: the wrath of Caesar.

Pilate chose the friendship of his boss in Rome over friendship with the King of the Universe. How many times have we made an equally foolish choice -- of expedience over principle? Yes, we are all guilty of the death of Our Lord.

Yet, when the account of the trial, torture and execution of the Son of God is reduced to only a universal poster for human depravity in general, a truth at the heart of this sacred narrative is denied.

At this time of year sincere Christians endeavor to walk again in the footsteps of our Savior as he emerged from his 40 day fast to beg His Father in the Garden at Gethsemane to let the cup of an excruciatingly painful and shameful immolation, pass by.

In endeavoring to penetrate as deeply as we can the mystery of the death of Jesus, it is necessary that all the factors in his murder are considered and encountered. It is a denial of the Cross to slink away from the truth as did all but two of the followers of Jesus on the Day of His Crucifixion.

We cannot content ourselves, out of fear and political correctness, with referring to those who conspired to kill Him, in bland generic terms as "the Chief Priests and the People.”

In the case of Judas, New Age gnostics paint him as a a misunderstood anti-hero who made possible the divine atonement by bringing about the inevitable Sacrifice that opened the gates of heaven. Without Judas, they say, Christ could not have fulfilled His mission. This assertion is presented to Gnostic initiates as a specially insightful esoteric revelation.

But it ignores the plain meaning of Jesus words: "Woe unto the world because of offenses! For it must needs be that offenses come; but woe to that man by whom the offense come! (Matthew 18:7).

Judas was not freed from the consequences of his betrayal by some occult notion of him serving as a righteous instrument of the inevitable. Some sinner was going to offend God and betray His Son. It tuned out that that someone was Judas Iscariot. Woe unto him, and to all who do as he did.

The religion of Judaism, when it became enamored of the oral traditions and superstitions of men, became the idol that blinded the Jewish leadership and then the people, to the fact that their Messiah had arrived and was in their midst. Initially, He had come only for them.

In the 1965 papal teaching "Nostra Aetate," it was declared, "...the Jewish authorities and those who followed their lead pressed for the death of Christ (John 19:6); still, what happened in His passion cannot be charged against all the Jews, without distinction, then alive, nor against the Jews of today. Although the Church is the new people of God, the Jews should not be presented as rejected or accursed by God, as if this followed from the Holy Scriptures."

The Pharisees had the major instigating role in the murder of God's Divine Son. Those who derive their spiritual patrimony from the Pharisees are today known as Orthodox Jews. Because of their belief, and not because of their alleged racial descent, these modern-day Pharisees are indeed guilty of deicide. They would crucify Jesus again, if they could. How do we know this? The most revered of all rabbis in the history of the West is Moses Maimonides. He is admired by liberals and conservatives, the Left and the Right, and most significantly, by the Orthodox wing of Judaism, for whom he is the paradigm of a great sage and legal authority.

In his tract, Avodat Kochavim, Rabbi Maimonides issued a divine mandate to kill the "wicked" Jesus Christ, as well as all Jews who follow Him, and all those who do not follow the Talmud.

Maimonides wrote: "It is a mitzvah (religious duty highly pleasing to God), to destroy Jewish traitors, minim (Christians), and apikorsim, and to cause them to descend to the pit of destruction, since they cause difficulty to the Jews and sway the people away from God, as did Jesus of Nazareth and his students, and Tzadok, Baithos, and their students. May the name of the wicked rot.”

The holy name of Jesus Christ, by which every knee shall bow, is cursed by Judaism’s most esteemed, media-glorified rabbi, who dares to say of Him, "May the name of the wicked rot."

(Maimonides’ allusion to "Tzadok and Baithos”  and to apikorsim, refers to opponents of the Talmudic oral law).

In the Babylonian Talmud (BT) Sanhedrin 43a we read:

Jesus "went and set up a brick to symbolize an idol and bowed down to it...Anyone who sins and also causes the community to sin is not permitted to do repentance. A Sage said: Jesus performed magic and incited the people of Israel and led them astray."

The famous passage from the Gospel of Matthew about the Jews agreeing that Christ's blood would be on them and their children has been used to justify racial hatred for anyone labeled a "Jew." This view is contrary to the New Testament, where race is only a determining issue for the proud rabbinic enemies of Jesus, not for His followers.

The Blood Libel that is not a Libel

The Gospel of Matthew has been indicted as the grounds by which countless "Jews" were murdered in pogroms due to the "Blood Libel" (Judaic persons supposedly falsely accused of torturing and murdering Christian children).  Tremendous advantage has been gained for Zionism and Talmudism by the circulation of tales of bloodthirsty priests and Christian peasants attacking and killing Judaic persons on trumped charges of "ritually" murdering gentile infants and children.

These archetypal tales of blamelessness and victimhood have an endless shelf life and are recycled year after year in spite of the fact that the truth of the ritual murder accusation has been confirmed by no less a figure than Ariel Toaff, the son of the Chief Rabbi of Rome. Toaff is Professor of Medieval History at Bar-Ilan University, outside Tel Aviv. He revealed the reality of Judaic ritual murder of Christians in his formidably researched masterwork, Pasque di Sangue ("Blood Passover”). He gives strong evidence that in some cases Ashkenazi "Jews" were indeed guilty of the ritual murder of Christian children in Europe.

If his book had remained in print for more than a few days it might have completely overtuned one of the pillars of Zionist agit-prop. In the ensuing hysteria however, Pasque di Sangue was almost completely suppressed after the author recanted under immense pressure and threats of imprisonment and bodily harm.

Pasque di Sangue has been accurately translated and published online in English as Blood Passover. The entire text is freely available at: http://www.bloodpassover.com/index1.htm
It makes for sobering Good Friday reading.

"For ye, brethren, became followers of the churches of God which in Judaea are in Christ Jesus: for ye also have suffered like things of your own countrymen, even as they have of the Jews: Who both killed the Lord Jesus, and their own prophets, and have persecuted us; and they please not God, and are contrary to all men: Forbidding us to speak to the Gentiles that they might be saved, to fill up their sins alway: for the wrath is come upon them to the uttermost." (I Thessalonians 2: 14-16).

Paul's statement is unambiguous. It is not open to interpretation. It destroys the whole basis of the current, play-it-safe party line of Church and State.

For most of its existence the Church proclaimed that beyond the evil that our own individual sins had wrought, and that of the Roman empire and its soldiers and procurators, it was the Jewish leaders and their followers who were responsible for the death of the Son of God. "Deicide" it was termed in my youth, in the years before Auschwitz became a synonym for cosmic suffering that surpassed Calvary.

In the pre-Vatican II prayer book or “missal” for the Latin Tridentine Mass it is stated, “Christ offered himself in complete holocaust on the Cross” (-St. Joseph Daily Missal [New York, 1950] p. 350).
Few in the 21st century dare to refer to Jesus Christ's immolation as a “holocaust.” In our time the word “holocaust” is solely reserved for what is said to be the suffering of the Judaic people during World War II. Jesus Christ’s sufferings on Calvary have been derogated to a distant second that no longer merits the adjective “holocaust."

Now, "post-Holocaust,” that is to say, post-Auschwitz, we are made to believe that God is not in heaven, he is on earth, in the person of the Jewish people themselves. The Cross has been replaced by the alleged homicidal gas chambers. The "wrath come upon them to the uttermost," has come upon us, as we cooperate in the imposture.

Who killed Christ? He was killed at Golgotha at the behest of the majority of the Jews of Palestine. The heirs of those killers are among us today in the ranks of Orthodox Judaism.

The memory of who killed Him - and why - that too has been killed.

11. Now when they were going, behold, some of the watch came into the city, and shewed unto the chief priests all the things that were done.

12. And when they were assembled with the elders, and had taken counsel, they gave large money unto the soldiers,

13. Saying, Say ye, His disciples came by night, and stole him away while we slept.

14. And if this come to the governor's ears, we will persuade him, and secure you.

15. So they took the money, and did as they were taught: and this saying is commonly reported among the Jews until this day.

I wonder how many Judaized atheists/dupes have never read Matthew ch. 28, verse 15. Those ignorant souls will never ponder the origin of their frequently parroted jest that mocks the ressurection of Christ.

"The Jewish Question: that's the wide canal which drains all the impurities, all the dirt and mud and sewage of man's soul."

I believe that Christ's death shows via the Roman government, the Jewish religious leaders and the people of the time all condemning an innocent man to death that all human governments, religions and races stand judged by God for the murder of His Son. They are representative of the whole as no one can deny that if He had been born in 2600 BCE or today that the same would not have been repeated.