Here below we reprint a photocopy of a letter from the Iranians last February warning of Israeli black op/ false flag operations.

At that time it appeared as though Mossad was active in the Far East in attacks on Israelis which were then blamed on Iran by our compliant media. For some reason the Israelis almost always instantly know, a few minutes after an attack, that Iran or its "proxies" are the guilty ones. With clairvoyant police work like that, you'd think they would be able to actually stop the perpetrators, instead of just knowing who they are almost immediately after they commit the crime.

Now, on the anniversary of alleged Iranian attacks decades ago in Argentina, Israeli tourists have been killed in Bulgaria. Cui bono?

Observe that the important statement from Iran reproduced below had to be published in The Wall Street Journal as a letter to the editor, rather than a news report.

Notice also that today the terror bombing of high level Syrian officials (possibly with the assistance of the CIA) is not described as a terror attack by the American media.

"Beware of falling into another Israeli trap" 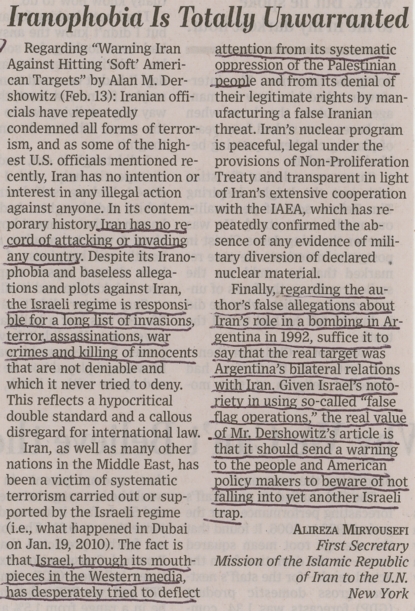 Ever get the feeling that the curtain has raised and the show is about to begin? Newsnight in the Uk has just had a member of the Syrian Council state that the use of chemical weapons by Assad would be a 'game changer'. Now why would the Syrian government use chemical weapons on its own people knowing full well that to do so would in effect open the door to a western military attack?
And why would the Iranians attack a bus load of Israelis in Bulgaria knowing full well the possible consequences?
The cryptocracy are making a move, fall down before them in awe.

"Yes, Israel bombs its own citizens and esp. teenagers."
Your ignorance knows no bounds.

You think that Israel wouldn't sacrafice a relatively small number of its own people to accomplish its geopolitical ends, "Truth"?

Zionist leaders strongly pressured Allied Nations to refuse transfer of millions of Jews who the Nazis wanted to expel, insisting that they be patriated nowhere but Palestine, which the British mandate for Palestine couldn't allow at the time, knowing it would cause civil war in the Levant. This didn't concern the Zionists, however, who were just as happy to see these stateless Jews martyred in Nazi camps, all but guaranteeing allied support for a Jewish state in Palestine.

@Truth
It has been said, "The end justifies the means" so do you really think it would be above Western governments and international intelligence to act out such a basic concept when history bears record of its use time and again? Surely you've heard of the expression collateral damage haven't you?