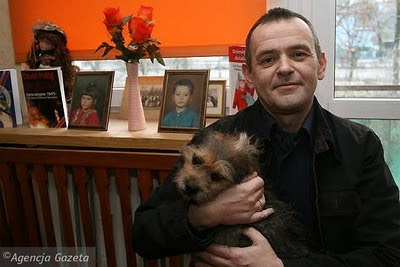 Dariusz Ratajczak
By 24opole.pl and Michael Hoffman
Opole, Poland, June 16, 2010 -- The body of a former Polish history professor, Dariusz Ratajczak, convicted by a Polish court in 2002 of claiming that mass gassings of human beings in Auschwitz-Birkenau was impossible, has been found dead in a shopping center parking lot in the western Polish city of Opole.

Prof. Ratajczak was suspended in April 1999 from his teaching post at Opole University's Historical Institute after state prosecutors opened an investigation into the publication of his book Tematy niebezpieczne ("Dangerous Themes").

"The body, which was severely decomposed, has been identified by Ratajczak's family, so additional DNA tests will not have to be carried out," says Lidia Sieradzka from the Prosecutor's Office in Opole.

Judging by the state of the body and recent high temperatures, the man has been dead for up to two weeks, say police. Security guards at the Karolinka shopping centre claim, however, that the historian's Renault Kangoo was left at the car park on the same day, June 11, that it was discovered.   In the car police found documents which belonged to 48-year-old revisionist historian Ratajczak. Recordings from CCTV are being examined.

The cause of Ratajczak's death remains uncertain. Police think it is unlikely that he was murdered because  it is alleged that no injuries were found on the body during the autopsy.

Police established that the historian, who had problems finding employment in Poland, planned to go to Holland or Belgium to work in a company to do menial labor. For that purpose he acquired a Renault Kangoo automobile, in which his body was found stuffed between the front and rear seats. It is reported that he may have been living in his car. He worked at odd jobs for food.

In 2000, Dariusz Ratajczak was fired from the University of Opole, where he worked for eleven years, and banned from teaching at other universities for three years after the publication of Tematy niebezpieczne, in which he claimed that it was not scientifically possible to kill millions of people in alleged Auschwitz death camp gas chambers.

Earlier in 1999, a Polish court found Ratajczak guilty of "public denial" of German war crimes – which is against the law in Poland – but because the book was self-published with a print run of only 260 copies it was not thought to be able to create a "social annoyance" and he was not punished. In his defense, Prof. Ratajczak told the court that his book was merely a survey of many dissenting views on the "Holocaust," including revisionist works by British historian David Irving and others. "Holocaust denial" is a crime in Poland, Germany, Hungary, France, Switzerland and Austria.

Mr. Ratajczak is survived by a son and a daughter.

Some people just know too much I guess.

Security guards are covering their butts for having been derelict in their duty of not noticing this car by the second day.
He probably died much like many abandoned people do - through neglect and indifference by the society which formerly valued and rewarded him for his contribution to it.
I expect it's very hard and unhygienic to be living in one's car 24/7 and to maintain self respect and the will to go on living.
It had been 11 wearying years with no rehabilitation in prospect; but i suspect we are on the cusp of this Holofraud being laughed off the stage of history.

this is very ironic that he was from Poland. Not only was there a plan to kill jews but Hitler intended to kill all of the Polish people, then the Russians. I have detail about this at whatisknown.com in the about me page. Our history has been distorted in a big way and while I am not at all sympathetic to the cruelty by Israel, I do believe that Hitler was a mass murderer.

Punished for highlighting a scientific fact. It must have been a fact otherwise they would have destroyed his argument with hard evidence. It can only be assumed that they have no solid evidence to refute his claims, no other conclusion can be drawn.

My heart broke upon learning of this learned gentleman, Professor Dariusz Ratajczak dying homeless and abandoned. How the government of a supposedly free and democratic country can persecute one of its citizens to the point of oblivion just for pursuing historical truth is beyond me. I will pray tonight for the soul of Professor Dariusz Ratajczak, that our Holy Mother Mary Ever Virgin asks her Son Our Lord Jesus Christ to welcome him home. Professor Dariusz Ratajczak, thank you for your courage and for your refusal to deny the truth standing your ground against the enemies of truth and God. For those that condemned you, I pray that they make reparations to our creator for your crimes, before you meet him at the final judgment.

Good luck in the after life. Thanks for being a free spirit in this one.

Remember one and all, truth does not need the protections of the courts, but lies do. According to the world jewish congress, there were still over a million jewish Nazi concentration camp survivors in the mid '90s. As Norman Finkelstein's mother said "with all those survivors was there really a holocaust?" Do the math.

that should tell us all we need to know about the true nature of power in this world, and those behind it

respect to this brave man who puts his fellow historians to shame.

And it will soon be a crime to speak out in favor of the Palestinians.

the man had been dead for several days and the authorities say, his car was parked only the day before they found him.... is it possible that dead people are driving cars in Poland or was he "taken care of" by the folks, which he exposed in his book...
go figure....
ConcernedCitizen

Back in the 60`s and 70`s, nobody took that Holocaust crap seriously at all. My opinion is that the six million formed the backbone of the German Army, else how do you possibly explain that emeciated, skin and bones poor Jews could form any army three years later and whip the entire Arab world? Now we know why they act like Nazis. I am not a Jew and I do not CARE if the were slaughtered in the Holocaust. THEY ARE NOT MY PEOPLE. To Hell with the vicious, lying Jews. No American money for a Theocracy bitterly opposed to my own Religion. Their very recognition by this Gov`t here in the US is in direct violation of the 1st Amendment. The murder of Paul Dogan IS an Act of War. Treason is in the air!!!

A life destroyed by the usual culprits. Feel sorry for the 2 kids he has.

The intelligent observer will take this information - the brutality that the Jews visit upon those who have truly exposed them and ruined their plans - and use it as a benchmark by which to measure the effectiveness of those who claim to be fighting the Jewish threat.

No such harm has ever come to any of the so-called White Nationalists, the Aryans, the Neo-Nazi's, etc.. From this, and other facts, we can establish that these groups are not only totally ineffective, but are actually quite helpful to the Jewish Criminal Network!

I believe it was Theodore Herzl who said "The Anti-Semites shall be our best friends!"

It's a shame Professor Dariusz died for telling the truth. It is terrible how they can destroy a person. I will pray for his family and others who have paid dearly for speaking the truth.

What I don't understand is that are 1 million or more Jewish survivors, but I have not heard of that out of thousands of other non-Jewish prisoners, like Gypsies, homosexuals, political prisoners, other Europeans, retarded people that were interned in the camps, NOT ONE has come forward saying they're survivors.

another problem with this issue is that when Organized Jews ban freedom of speech about one subject, their own academics and historians lose all credibility. who will buy books written by book banners? I walk into a book shop, pick up a book, read the author's name, put it back down. 'this guy cant be objective, he has an agenda'

They can try and discredit great historians (like David Irving)but it's guaranteed to fail. When I read about his persecution at the Warsaw book fair, I went to his web site and downloaded his books. The internet ended the zio-monopoly on information and history.

This is no different in many respects to the psychiatrists and psychologists who were jettisoned from the ranks because they still knew that homosexuality was a curable psychiatric condition even though the DSM was altered by homosexual therapists to "legitimize" their condition.

"The truth is no defense," when an entire society is under the influence of a gigantic illusion.

Dariusz Ratajczak was a former Professor in Opole (Oppeln) University, and an ardent Polish nationalist loyal to Endecja ideals (including: annexation of eastern German territories as 'ancient Slavic Polish lands', expulsion of Germans, antisemitism, Polish territorial expansion up to Minsk/Belarus). As such, Ratajczak did not revise the exaggerated claims of Polish Communists and Polish nationalists on the numbers of Polish victims of the Nazi occupation.

Ratajczak was not an active revisionist it seems: he based himself on secondary holocaust revisionists. Ryszard Bender (KUL, Lublin University) on Radio Maryja defended Ratajczak's claims on Auschwitz gas chambers though.

Ratajczak was the son of Wielkopolska-born father and a Lwów-born mother, 1950s Polish settlers in the formerly German town of Opole (German: Oppeln) in Upper Silesia. In 1995 he opposed the German-Polish reconciliation at Opole University, and glorified the Polish-nationalist Silesian Uprisings' participants, who killed German civilians.