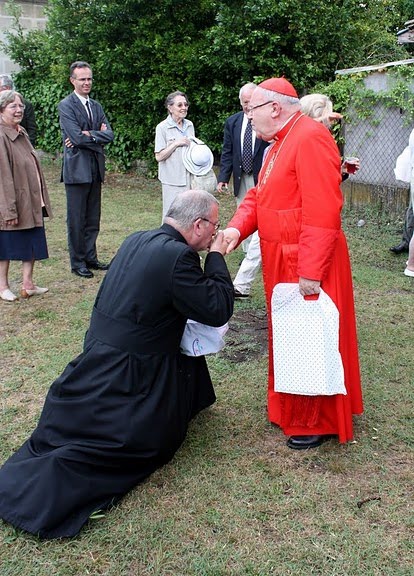 The corpulent fellow in the red suit having his hand kissed is "His Eminence" Cardinal Jean-Pierre Ricard of Bordeaux, France.
Effusive praise and gratitude is being heaped on him by "traditional Catholics" because on June 13 he deigned to administer the sacrament of Confirmation to French children according to the old, pre-Vatican II rite. (See it here).
Cardinal Ricard is a follower of the Babylonian Talmud under the instruction of Rabbi Avi Weiss of New York.
In July 1989, Rabbi Weiss and six associates attacked the Carmelite Catholic nuns' convent in Auschwitz. Pope John Paul II subsequently expelled the nuns and closed the convent.
In March 2006 Cardinal Ricard underwent his submission to the Babylonian Talmud at Yeshivat Chovevei Torah, under the direction of Rabbi Weiss.
Cardinal Ricard removed his pectoral cross during his time at Yeshivat Chovevei.
Cardinal Ricard has never repudiated his submission to the Talmud or his allegiance to his nun-hunting rosh yeshiva, Rabbi Weiss.
This is the face of the papally-approved "return to tradition" -- the emerging, hybrid Babylonian Talmudic "Traditional" Catholicism.
For documentation on Cardinal Ricard and Rabbi Weiss cf. Judaism Discovered by Michael Hoffman, pp. 547-554.
***
Posted by Michael Hoffman at 6/21/2010 08:58:00 PM

Very helpful contextual summation. It's amazing how the picture comes together when all the pieces are brought to light.

There are many "different" traditional catholics so don't lump us all together. There are those who are sedavacantists who don't think we have a Pope. There is the FSSP who doesn't speak out against the errors of Vatican II, etc.), there is the SSPX who supports the traditions before Vatican II. Now there are Novus Ordo Catholics who think it doesn't matter which Mass you attend. The crisis and apostasy in the Catholic Church is prophecy and will continue until the consecration of Russia is done by the Pope with all the bishops as Our Lady of Fatima requested.

Mr Hoffman, whether or not Cardinal Ricard 'submits' to the Talmud, whatever that cryptic comment actually means, it won't save France from being buried under a Zionist and Grand Orient promoted tide of Islamicism.

The papacy will be formally extinguished!

Mr. Hoffman is a very brave man, and I admire him sincerely. That´s why it's so sad to see him compromising the struggle of his whole life, doing exactly what his enemies want him to do: to split and to weaken the Church of Jesus Christ. And, of course, if per absurdum the Church can be destroied, then the Jews are right trying to speed up the process.

Apostates are not Catholics

I still don't see how we can call them Jews. If they're not Jews, then that should be our primary end, viz. attempting to demonstrate this fact. That would undermine the entire edifice.

Hoffman, do you have an email address?

Oh come on Anonymous 4:08! Mr. Hoffman splitting the Church? Of course Our Lord promised to be His Church up to the end of the times (HIS CHURCH). And Mr. Hoffman is helping doing exactly that, so that a small "rebaño" remains. I don't know what his religion is, but at this point in history it doesn't make any difference provided people like me can find someone who PUBLISHES what's going on.

“Cardinal Ricard is a follower of the Babylonian Talmud under the instruction of Rabbi Avi Weiss of New York.”

Really? So Cardinal Ricard converted to rabbinic judaism? You can now read the internals of his soul. Remarkable. Is the basis for this assertion the photograph of him in your book at Yeshivat Chovevei Torah?

Although Ricard’s removal of his pectoral cross is worthy of condemnation it’s a stretch to lament a deleterious form of political correctness to claiming that Ricard has undergone his “submission” to the Talmud merely because he was photographed at Yeshivat Chovevei Torah or because he associates with a rabbi. Other than circumstantial evidence, you provide no direct evidence in your book (like an excerpt from one of Ricard’s sermons, for instance) that Cardinal Ricard has converted to rabbinic judaism or that he denies Jesus Christ. Is this guilt by photograph and guilt by association?

At work, I was required to attend a diversity training seminar. I was photographed at it for internal company promotional materials. I most certainly did not – and do not – agree with the premises behind diversity training, yet in no was I “submitting” to it simply because I had to attend. I was photographed next to – and chatting with – individuals who worship at the altar of diversity training. Despite our extreme differences of opinion I do maintain cordial relations with these individuals. Those associations do not indicate that I have been brainwashed.

In like manner, perhaps Cardinal Ricard never repudiated his submission to the Talmud because he never felt he “submitted” to it in the first place.

As far as outrage over a “papally-approved return to tradition” is concerned – that’s a very loaded remark that levels criticism at your fellow traditionalists for being so wrapped up in externals that they ignore other issues. Well, that slavish and sensual obsession with externals was a result of following false shepherds (many of them Catholic, tragically) who dared to cast doubts on the validity of the new rites. Woe unto them who cast those doubts.

Do you have any idea what you are talking about? Do you know what a Talmid chacham is?

Do you know the symbolic significance of removing a cross from one's person before entering a yeshiva to submit to obeisance to the Gemara?

Before you make statements based on ruminations off the top of your head, endeavor to make some effort at learning something about the subject upon which you venture to hold forth.

Why are you so shy about naming the rabbi who was rosh yeshiva over Cardinal Ricard, rather than referring to him generically, as you do? This wasn't just "a rabbi." This was Avi Weiss, the man who assaulted the Carmelite nuns' convent in Poland and, according to Cardinal Glemp, tried to kill the nuns there. If you regard Cardinal Ricard's submission to Rabbi Weiss as on par with attendance at a compulsory corporate diversity training program, then you are far gone in delusion.

For Talmud and Judaism in the preceding comment by Zen, substitute Mein Kampf and Nazi. For rabbi, substitute Fuhrer, then see if anyone in the Novus Ordo Church would believe that Cardinal Ricard was other than in submission to Nazism if he had done at a Nazi party headquarters what he did at the yeshiva.

But of course we have a pontiff who makes common cause with synagogues and rabbis, therefore Cardinal Ricard's submission to Rabbi Weiss and the Babylonian Talmud is nothing out of the ordinary, much less a punishable offense in the Novus Ordo Seclorum.

I freely admit that my knowledge of the Talmud is infinitesimal, other than what you and Elizabeth Dilling have put forth. If I have matzo ball on my face, it probably won't be for the first or last time.

However, the question isn't whether I would know or understand the significance (symbolic or otherwise) of Ricard's actions and the judaic terms you cite, but whether Cardinal Ricard was fully aware and cognizant of them to the extent that you and the rabbis are.

I don't believe I defended Avi Weiss in my comments, nor would I remotely attempt to do so. Please don't suggest otherwise. I also made it clear how I felt about Ricard removing his pectoral cross.

The ruminations I have and the statements I make are informed by the faith. "Heaven and earth shall pass away, but my words shall not pass away." Consequently, I do not believe that any text, technique, or methodology can nullify the Gospel. If I thought so, I wouldn't bother being a Christian.

Your rejoinder is evasive and disingenuous. You were not accused of "defending Avi Weiss."

You were accused of minimizing the evil of Cardinal Ricard by omitting the identity of the notorious rabbi to whom he submitted, thereby whitewashing the fact that Ricard did not submit to just any rabbi; rather, he submitted to the same rabbi (Weiss) who attacked the nuns' convent in Poland. Your attempts to palliate the iniquity of Cardinal Ricard's servile relationship with Weiss are pathetic.

You write: "I do not believe that any text, technique, or methodology can nullify the Gospel."

Addressing the Pharisees, Jesus told us what he believes: "You nullify the word of God by your tradition that you have handed down" (Mark 7:13).

Once again, you plainly don't know what you're talking about. When you are caught faking it, you compound your folly with ever more bluffs, feints and misdirection.

I expect sincerity from those with whom I dialogue. You are seriously remiss in that regard.

The Cardinal by the very fact he is having anything to do with The Talmud means that he has entered into a Faustian pact with The Synagogue of Satan.

If Cardinal Ricard had taken up the study of the Talmud with a knowledgeable Christian exegete in order to refute the Talmud, there would be nothing wrong with that.

His situation at Rabbi Weiss's yeshiva is something very different, however: it was both an act of submission (e.g. the removal of the pectoral cross while at the yeshiva) and a means for encouraging the Talmudists in their grievous sin of rejecting the Messiah of Israel.

There is a third factor in this Revelation of the Method era, when formerly secret activities are sometimes deliberately disclosed and even flaunted: Cardinal Ricard is revealing his true allegiance, and yet he is appointed, by the pope, a role in the encouragement of the Tridentine Mass. The symbolism is ominous.

Dear Mr. Hoffman, re. your above comment, "...and yet he is appointed, by the pope, a role in the encouragement of the Tridentine Mass."

Those are news indeed. Would there be a citation for that? May be "l'osservatore romano"? Many thanks indeed.

This is an internal matter. There is no formal Vatican statement about this. But one can see that Ricard has this responsibility in France - see the links below.

Yes, many thanks Mr. Hoffman. Very interesting indeed. The Institute of the Good Shepherd. Anything, provided the opus of Mons. Lefebvre be destroyed...