38th Anniversary of the Israeli Terror Bombing of Beirut Lebanon

38th Anniversary of the Israeli Terror Bombing of Beirut, Lebanon

Corporate Media Report Nothing About It

Aftermath of the Israeli bombing of Beirut, August, 1982

As we mourn the destruction and loss of life that occurred in the mysterious explosion in Beirut, Lebanon on August 4, we recall that this month marks the 38th anniversary of the Israeli air force terror bombing of the city of Beirut in the summer of 1982, which reached a climax of genocidal fury in August of that year. The attacks were so horrific they were denounced by American Zionist Leon Wieseltier as “terror-bombing pure and simple.”

Another outspoken defender of the Lebanese people was the famed English children’s author Roald Dahl (Charlie and the Chocolate Factory), who condemned the Israeli terror attacks as an utterly despicable war crime by a cowardly air force that was unopposed. Dahl had been an RAF fighter pilot during the Second World War, facing off against the formidable Luftwaffe, a battle considered Britain’s “finest hour.”

August 1982 witnessed one of Lebanon’s darkest hours. 38 years ago the city’s clearly marked hospitals, schools and apartment blocks were intentionally set aflame and flattened by Israeli bombs. Tens of thousands of Lebanese civilians were killed or wounded.

This Israeli war crime, ordered by Ariel Sharon, is forgotten by “our” media on the 38th anniversary of this mini-holocaust. 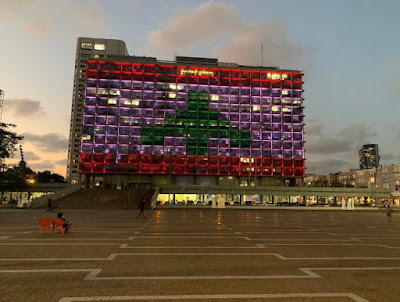 Tel Aviv displays flag of Lebanon in “solidarity" with Beirut

Instead, after the explosion this week in Beirut, the Israeli city of Tel Aviv displayed an image of the flag of Lebanon on a municipal building. This “kind-hearted gesture by the Israeli people” quickly became the iconic image of the news cycle, heavily publicized. The Israelis are praising themselves for their humanity in the midst of this media circus. But wouldn’t a true sense of humanity require reparations to be paid to Lebanon for the destruction and loss of life in 1982, and a museum built to study the Israeli atrocity, memorialize it and impart moral lessons so it will never happen again?

Ask almost any American about the dead and maimed victims of the Israeli Air Force holocaust in Beirut 38 years ago. The response you’ll receive will be, Never heard of it.

That’s how our reality is shaped to fit a propaganda narrative having no relation to history or truth. Those who are fed this falsification cannot make accurate judgments or decisions. Our entire worldview is blinded by suppression of the holocausts that have been deemed not fit to print, or broadcast.

Michael Hoffman is a former reporter for the New York bureau of the Associated Press.
______________