Alice asks questions and the parrot replies,
"Slanders of the Talmud are as old as the Talmud”

A Study in Avoidance Tactics 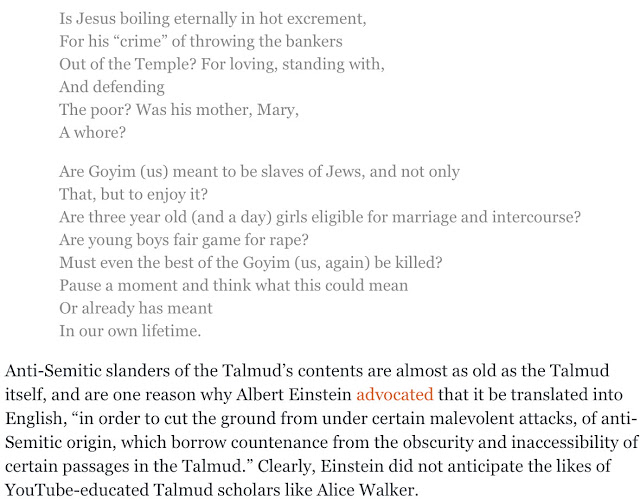 In the screenshot above, Yair Rosenberg, writing in the Judaic Tablet magazine of Dec. 17 quotes an excerpt from Black poet Alice Walker’s “It is Our Frightful Duty to Study the Talmud," and then announces that the poem is a “slander,” as well as a “malevolent attack of anti-Semitic origin."

The egoism in his assault on her poetry shines forth like a blinding truck light. We are the deer frozen in the headlights of his ipse dixit.

Mr. Rosenberg doesn’t so much as begin to answer the earnest questions in her poem. He resorts instead, to a kind of pre-fabricated axiom: all-decent-people-know-this-is-nothing-but-recycled-anti-Semitic lies.

That is the bullshitter’s con. Stall and bluster. Insinuate bad motives to those who dare to pose hard questions that demand an answer.

Why these avoidance tactics?

Because the answer to every question Alice poses, is yes.

Yes, Mr. Rosenberg, the Babylonian Talmud does indeed decree that 1. Jesus is in hell boiling in excrement, 2. that the Blessed Virgin Mary was a whore, and that 3. “Even the best of the goyim should all be killed.”

How is bullshitter Rosenberg going to evade these truths? He can try to steer us toward a redacted Talmud Bavli text, but that would put his credibility in peril, since uncensored English translations that prove the veracity of the contents of the Talmud, such as the esteemed and accurate Steinsaltz edition, are readily available.

Mockery is a stratagem that the Talmudic mentality puts forth as a substitute for truth.  That’s one “answer” — mocking Alice Walker as a myopic blunderer so sloppy she is seduced by tiresome and hateful libels. How do we know they are libels? The media tells us so. If we doubt the media, then we are cast as demons inhabiting an anti-Semitic hell.

The other tried and true tactic is censorship and suppression, lest there be a reckoning, which would consist in the realization of the concealed truth that Orthodox Judaism’s holiest book (far-surpassing the written Torah in authority) — the Mishnah and Gemara, i.e. the Torah sheBeal peh, a.k.a. the Talmud of Babylon —  is most definitely a book of ferocious racism, savage hatred and scurrilous pornography.

But rather than face those inconvenient truths and deal with them forthrightly, Yair Rosenberg and a thousand hacks of greater and lesser hack-aptitude almost always parrot, by way of reply, something along the lines of:

That’s the moronic doggerel that confronts Walker’s poetry of truth, for which the truth-teller is smeared, boycotted and ostracized.

Argument? Debate? Open inquiry? The Talmudic mentality does not permit those rights of a free society when they threaten the myth of benevolence they have woven around their sacred text, upon which rests an increasingly tottering house of cards.

The grandees at the ADL, the SPLC, the Tablet and the other self-appointed arbiters of what is permissible for us to say and ask in America, don’t stoop to answer Alice Walker’s reasonable questions.

They want us to believe that it is simply the case that she is a foolish bigot for having issued her queries in the first place: now say no more or your reputation will be permanently traduced.

That’s the parrots’ answer to Alice.


Michael Hoffman is a former reporter for the New York bureau of the Associated Press, a former media consultant for the New York Times, and the author of the textbook Judaism Discovered (1102 pages), as well as Judaism’s Strange Gods: Revised and Expanded.  In lieu of offering a rebuttal to his exhaustive scholarship, both books were banned from the Amazon Kindle on August 13, 2018.
____________

Are Michael Hoffman's books for sale somewhere other than on Amazon?