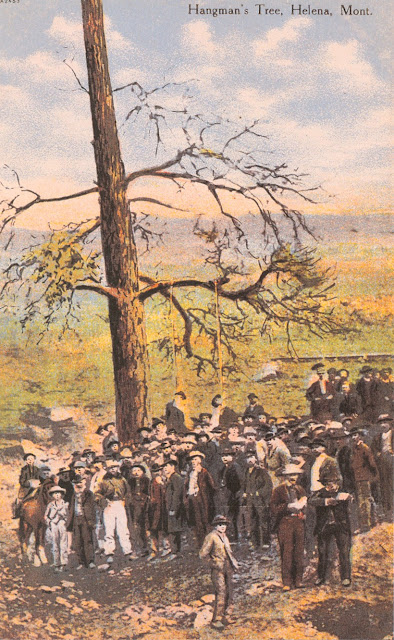 I have investigated secret societies most of my life. Researching the mass lynching of whites in Montana for the September issue of Revisionist History® newsletter, I was shocked to discover that a masonic organization, the 3-7-77 vigilantes, were the perpetrators.

It was also appalling to learn that beginning in 1956, the Montana Highway Patrol adopted 3-7-77 as their official symbol. History hacks will cite the Dimsdale and Langford books to defend the vigilantes as the territory of Montana’s "first law enforcement” (which is not true, local sheriffs and miner’s courts were the first). The problem is that both of those authors, if not actual members of the secret society, acted as its public mouthpiece. Their task was to hoodwink the public and they did a thorough job. As a revisionist historian my job is to penetrate the hoodwink.

Freemasonic influence in the Old West has yet to be properly documented. That it was considerable, there is little doubt. The extent of the penetration has yet to be written, although we have published a groundwork for it by giving an account of what actually transpired in Montana.

In America today we are undergoing a new cycle of brainwash in which the lynching of black people in the U.S. — a very real crime, mostly perpetrated by the masonic Ku Klux Klan — is made to appear as the only, or the main extra-legal hangings in American history, replete with photos of ghoulish whites pointing to black victims dangling from a rope.  To promote this one-dimensional caricature context is excluded.

The missing context consists of two primary facts. First, mixed crowds of whites and blacks lynched people they imagined were unpunished criminals, to the satisfaction of both races.

Second, lynching of white people in places like the Montana territory,  was celebrated as much as the lynching of black people in the South and Midwest. Ghastly images of white men hanged by white mobs were made into postcards (see illustration above) and sold throughout America. There wasn’t a color monopoly on relishing the suffering of the hanged. These were equal opportunity grotesqueries, but just try to state that fact in a college classroom and then witness what happens to your career as a student or faculty member.

We have a copy of one of these postcards in our files. You won’t find it on display at the new, National Lynching Memorial Museum in Montgomery, Alabama, which is a segregated, all-black “history” institution.  In the postcard we see the bodies of Joseph Wilson and Arthur Compton strung up in Helena, Montana. Their “capital crime”? They were accused of having rolled a drunk and stolen his pocket change.

Sometimes the actual motive for a 3-7-77 lynching was to be rid of a competing businessman, a rival for the affections of a sweetheart, or a sheriff who had approached too close to a criminal investigation of members of the society.

In the photo reproduced on the postcard one sees young boys in the crowd, taught by their fathers’ example to delight in the spectacle. We don’t possess in our files a mint reproduction of the postcard. It’s no surprise that unlike the omnipresent and iconic photos of whites savoring the lynching of black people,  gruesome photographic spectacles of whites appreciatively ogling their fellow lynched whites are hard to come by.

Imagine state police shoulder patches and patrol car fenders in Mississippi officially adorned with the letters K-K-K? Yet the equivalent exists in Montana to this day: the numbers 3-7-77 are sewn on the uniforms and painted on the patrol vehicles of the Highway Patrol.

It makes you wonder whether the 3-7-77ers are still at work behind the scenes.

This is all part of the as yet unwritten secret history of America, which we have endeavored to at least partially excavate in this month's issue of Revisionist History®.