Letter from a reader of "The Occult Renaissance Church of Rome"

Letter from a reader of the book,
The Occult Renaissance Church of Rome 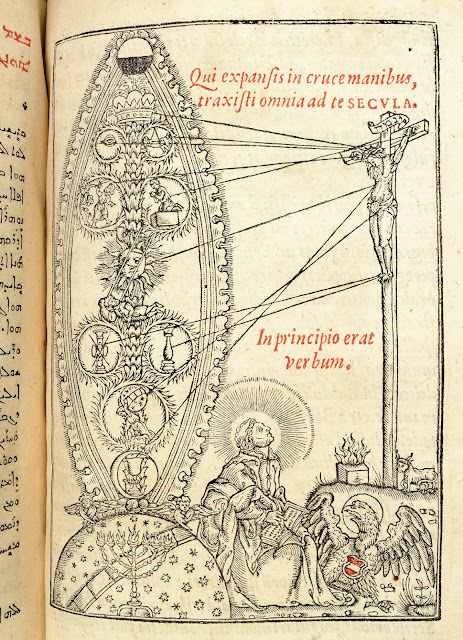 The Church of Rome’s Kabbalistic Christ (from p. 351)

New Year’s greetings, Michael,
We wish you and your family a happy and prosperous 2018.

I am writing basically to inform you that we did receive your latest book in the mail, and want to thank you again for sending a personal copy. So fascinated by its contents was I, that I managed to consume the entire 600+ pages in about four days.

It is, I must confess, a monumental work, but one which will probably not be read by the majority of so-called ‘trads.’ It’s message is too uncomfortable. The major premises of the work challenge some of our most cherished notions, I’m afraid. It is a veritable game changer, demanding of the average traditional Catholic intellect a kind of revisionist thinking which might be too disruptive to closely guarded prejudices, and far too revolutionary in its scope.

After all, your book does closely link the Roman Church to ancient pagan magic and philosophy, not to mention the Jewish Talmud and Caballa, over a period of at least 500 years. Not a linkage which promises to warm the hearts of most traditional Catholic coreligionists. Shockingly, it implicates iconic and venerated Catholic church figures in breathtaking moral failures and crimes, blame for which, earlier, many of us could easily lay off on Protestants and Jews.

I doubt that Archbishop Lefebvre, were he alive today, would have received the book gladly. I think you might have experienced at least some push back, even from him. Why? Because, if I understand his basic mindset at all, Lefebvre viewed the genesis of the church crisis stemming in great part from Vatican II, as an almost totally unanticipated and unexpected event. Pius XII was the last of the “good” popes. But immediately after his death, while The new springtime’ John XXII held the door, the church marched out suddenly into the night and fell off the edge of the earth into total apostasy.

One has to believe that ABL saw it all as an unfortunate, but temporary, glitch in the history of the church, which, with an amount of emergency intervention, would eventually be corrected. So when the post-conciliar apostates and anti-Christs finally died off, or were otherwise swept away, the real Church could once again re-emerge to assume Her proper role. Things would go on as they more or less always had. In anticipation of inevitable restoration, he was motivated, perhaps, to establish seminaries and train a corp of traditional priests in semi-exile, ready to drop back in once the crisis was over, and things were normalized.

Your book, though, seems to destroy any such ideas. The sickness was too deep and of too long duration. V2 was an inevitable eruption, the final bursting forth of a foul and diseased infection, festering, mostly subliminally, for centuries, though occasional outbursts had always occurred historically.

Organizations like the SSPX, by failing to understand the true dimensions of the crisis, can do little to arrest it. And believe me, they haven’t.

Michael, we would like to visit with you in the new year, and let you explain some of the book’s more intriguing and difficult passages. For example, your lengthy treatment of the Egyptian obelisk, moved and reset near the front of St Peter’s, at great expense, with an inordinate number of workers participating (900?). You expended many pages on this one engineering feat alone. I guess you want to impress upon the reader the extent to which a caballistic, occult-oriented pope would go (Sixtus V?), and the energy and effort he would expend in moving and re-planting this ancient, pagan symbol to the phallus. Is that it?

I’m happy that you give Savonarola his due. In a half-way healthy church he should easily be considered for sainthood. I have only one book on this intrepid man of God, a book which I’ve read twice. It is entitled “Life and Times of Savonarola” by Prof. Pasquale Villari, Scribner’s, 1898. I don’t find it in your bibliography. Maybe you number Villari among the Neoplatonists and Hermeticists. I trust that that is not the case. It may just be a title which is hard to lay one’s hands on.

Name and Address withheld by request 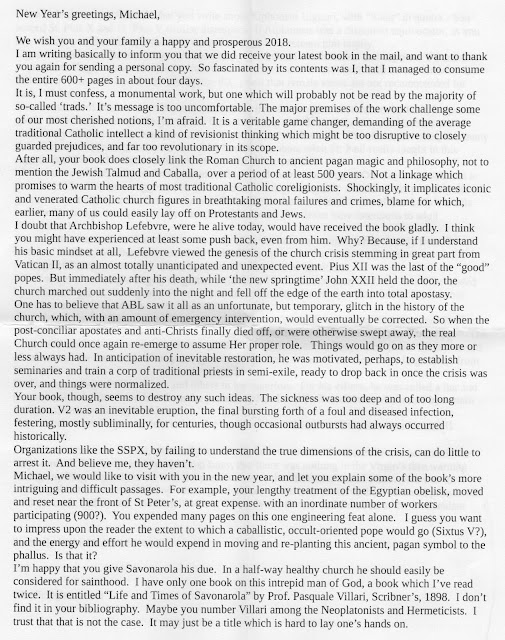 The Occult Renaissance Church of Rome is for sale here

What a lovely letter to receive.

I would support his contention that most of the Traditionalist Catholic groups over the past 40 years - who have done a great job keeping many Church traditions alive - would not read past the first 3 pages. No Traditionalist would actually sit down and refute Hoffman's arguments but more importantly - I agree completely that most TradCons felt that Vatican II and the immediate aftermath were merely temporary breakdowns and that the ship would right itself in 20 years or so at which time the SSPX (and all the Priests saying private Masses in their apartments, etc.) would come back in and set everything right. The Catholic Traditionalist Movement (CTM) which was started in New York had the same opinion - that the exiled Traditionalist Priests both inside and outside of direct Union with Rome would all get phone calls to come back in Rome by 1985 - but they were all wrong.

This is what led to Fr. Gommar Depauw happily accepting awards from President Ronald Reagan when Reagan is out consulting his astrologer as to the best day for him to sign a ballistic missile treaty.

Truly we are in times that perhaps no one has seen before.

I attended (as an Anglican) a Tridentine Mass with a traditional Catholic in the early 80s. It was held in a room next to the kitchen at a Holiday Inn. I don't think a single person there thought the situation was temporary. The "miracle" - if there was one - is that Pope Benedict XVI brought back the Tridentine Mass at all.

Is bitcoin or other cryptocurrencies form of usury?
I was looking for any answer from catholic perspecitve, but i have found none.
Best regards,

I am glad that the book (which I will make efforts to acquire) gives its due to Savonarola. Wouldn't that lead to a re-consideration of Pico della Mirandola's "syncretism"? That his 'syncretism' was an attempt to demonstrate that every 'religion' was ultimately leading to Christ? Pico died (murdered apparently) as a follower of Savonarola, determined to become a monk. He dismissed his former interest in Egyptian and Chaldean texts, destroyed his own poetry and gave away his fortune. Savonarola delivered the funeral oration.

After his death Giovanni Pico’s nephew, Gianfrancesco, disseminated the disinformation that you are repeating, that Pico was a loyal follower of Savonarola. If you read my book you will see that this was not the case. It was a cover story to posthumously render this arch-conspirator a conservative Catholic.

I don’t understand your remarks about syncretism, which you seem to favor — i.e. the pagan notion that all religions possess some truth. There is nothing in Scripture to support this. It is a project of the Neoplatonic occult imperium.

I am currently unemployed and for now its hard for me to help your mission but in my daily life I inform as many peoples as possible regarding your research even though it is extremely hard to get their attention. Also, it is difficult to go to a church and light a candle for you Michael since they are all corrupt and so I pray for you in my heart. I will try to get your books at my education institution by making a suggestion particularly the Occult Renaissance Church of Rome.
I had a very important question regarding infidels, please forgive me if I waste your time; you must be very busy. As Catholics we must shun infidels. What if my parents are infidels and would gladly show me the door if they found out I was Catholic (I would not mind) but am currently completing a Bachelor's degree and their housing accomodation does help me.
Is my behavior contrary to the Gospel?
Thank you

I do not 'favor' syncretism. I am an Orthodox Christian and Orthodoxy had (and has) a more severe view of 'neoplatonism' than the Latin West, which dabbled in the 'occult', astrology, alchemy, long before the Pico or Ficino.
The reason that I used the term syncretism (in quotation marks)was that this term is preferred nowadays in relation to the Renaissance 'philosophy'. See S.A. Farmer, "Syncretism in the West: Pico's 900 Theses (1486): The Evolution of Traditional Religious and Philosophical Systems", Tempe, Arizona: MRTS, 1998, 598 pages. I know only excerpts from it published on the author's site 'Syncretism in the West'@http://www.safarmer.com/pico/
But actually the question was not about Pico's beliefs of whether he was a loyal follower of Savonarola, but about the attitude of Savonarola regarding Pico.
Farmer wrote a bio of Gianfrancesco Pico in which he made the affirmation that: [GP was] "an extreme anti-syncretist who collaborated (with Girolamo Savonarola) in the posthumous doctoring of Pico's works".
So why was Savonarola collaborating in the deception of GF?

Farmer is a reliable authority on the text of Giovanni Pico’s"Nine Hundred Theses," but I reject taking at face value Gianfrancesco Pico’s pose as an anti-syncretist, on the basis that no one who took that position could defend history’s grand champion of syncretism, Giovanni Pico, as Gianfrancesco did. He disseminated his uncle’s cult far and wide, and this dissemination was ominous in terms of who it managed to recruit to the infernal cause: Reuchlin, Agrippa and many of the next generation of papal diabolists who were disciples of Giovanni Pico.

These matters are discussed at length in “The Occult Renaissance Church of Rome,” where the various feints and fronts that attend the biography of Giovanni Pico which has been promoted by Establishment consensus, are deconstructed and brought to light.

Thank you for your clarifications.