As a Symbol of Hanukkah Obama Opens the Door to Cuba

In 2003 President George W. Bush launched the invasion of Iraq on Purim, the religion of Judaism’s unholy Talmudic season of revenge on the goyim.

In 2014, President Obama chose the first 24 hours of Hanukkah, the religion of Judaism’s unholy Talmudic season of self-worship, to announce a major policy change in favor of Communist Cuba.

As part of Obama’s deal with Cuban President Raul Castro, Alan Gross, a Judaic-American intelligence asset of the US government, was released from a Cuban prison and is being lionized in the media as a cross between a saint and a mensch of inestimable worth.

Masquerading as a rabbi, the President of the supposedly secular United States of America, gave a sermon today in the synagogue disguised as the White House, wherein he stated that Hanukkah commemorates “victory over oppression” and “the redemption of captives.” This “redemption” does not apply to Palestinians detained without trial for years, or World War II revisionists such as  David Irving and Ernst Zundel who languished in prison for months, and in Zundel’s case for years —  at the insistence of the same Hanukkah hellions who Obama regards as paradigms of liberty. Jerry Brown in his capacity as Governor of California, celebrates Chabad's Hanukkah 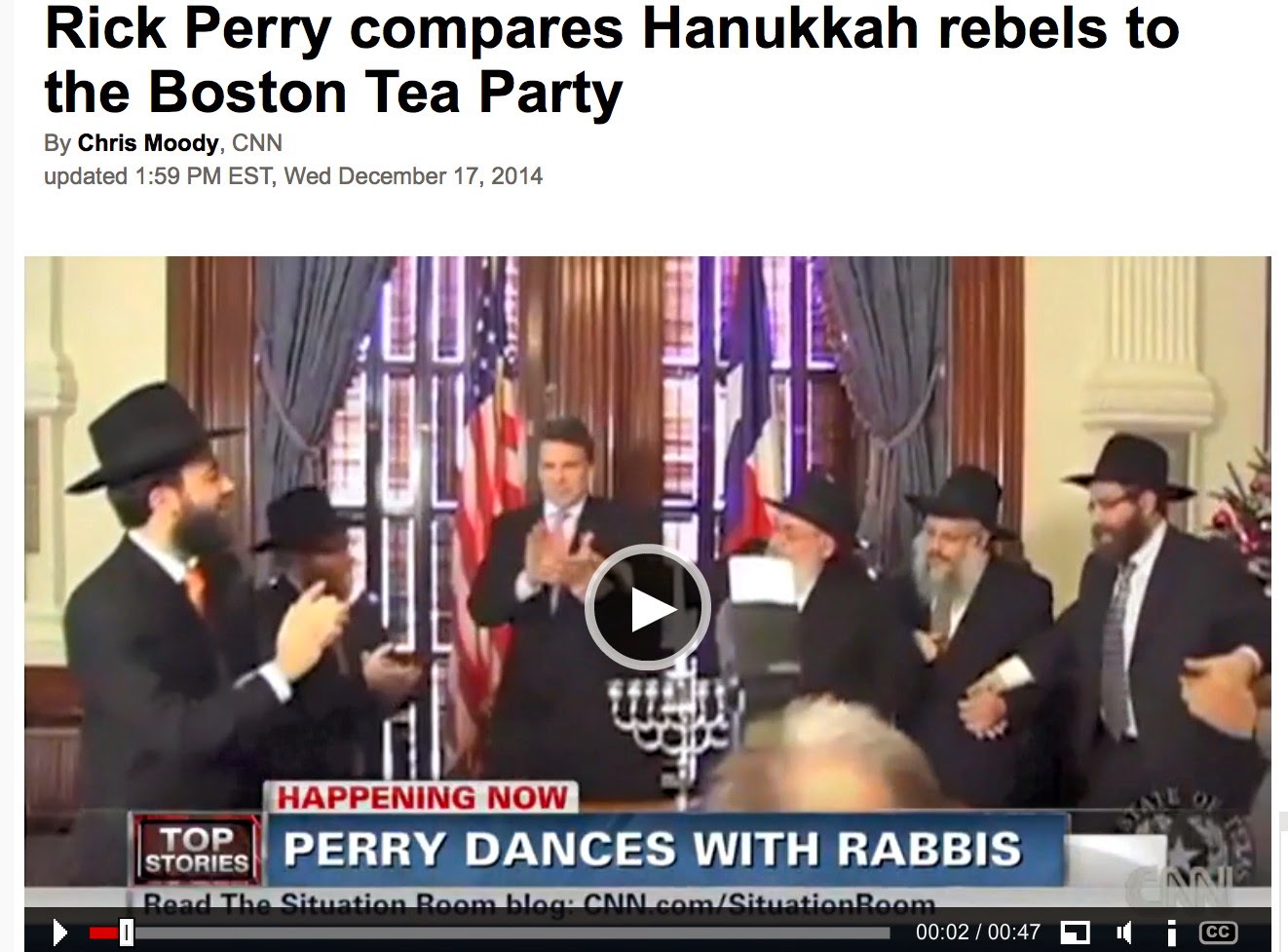 Rick Perry in his capacity as Governor of Texas, celebrates Hanukkah with Chabad

Take “Education Day USA” as an example. It is a Federal Law recommending the enactment of the Talmudic Noahide Laws, as promulgated by Chabad Grand Rabbi Menachem Mendel Schneerson. Chabad’s founder, Shneur Zalman, taught that gentiles are super-abundant trash. The Talmudic Noahide Laws (which have nothing to do with the Biblical Noah, other than purloining his name), stipulate that idolaters are to be executed. The Babylonian Talmud, as well as the supreme legal authority in Ashkenazic Orthodox Judaism, Rabbi Moses Maimonides, decree that worship of Jesus Christ is idolatry. Hence, according to the Public Law, true Christians will be subject to execution once Hanukkah, Purim and the rest of the rabbinic dogma is completely supreme over our nation. With Presidents like Bush and Obama, and a Congress that is Israeli-occupied territory, bloody repression of Christ’s people is just over the horizon.

Consequently, it’s not an abstruse intellectual exercise when this writer reveals what Hanukkah actually represents, as we did on December 16, producing a flyer intended for mass distribution by activists, so as to educate and inform Americans and make it less likely that Bush Republicans and Obama Democrats can turn a dark and hate-filled religion of tyranny and vengeance into a liberty-loving, warm and fuzzy “festival of light.”

In reality, the light from Hanukkah beckons from the spotlights of the concentration camps of the future, that await Christians who did nothing about rising Talmudic supremacy, when they still had the chance.

It’s a wonderful thing to still be free to tell the truth about these matters, unlike so many Conservatives who feel the need to mince words and daintily tiptoe around subjects that pertain to Judaism. Tomorrow I will report on friends and colleagues of this writer who courageously organized in Texas yesterday, what was, to my knowledge, the only anti-Hanukkah protest in America.

The late Canadian free speech attorney Doug Christie observed that rights written on paper guarantee nothing unless we are willing to militantly contend for them in the public square. My Texas friends deserve their freedom because they are fighting for it. I wish that could be said of every Christian who reads these words. 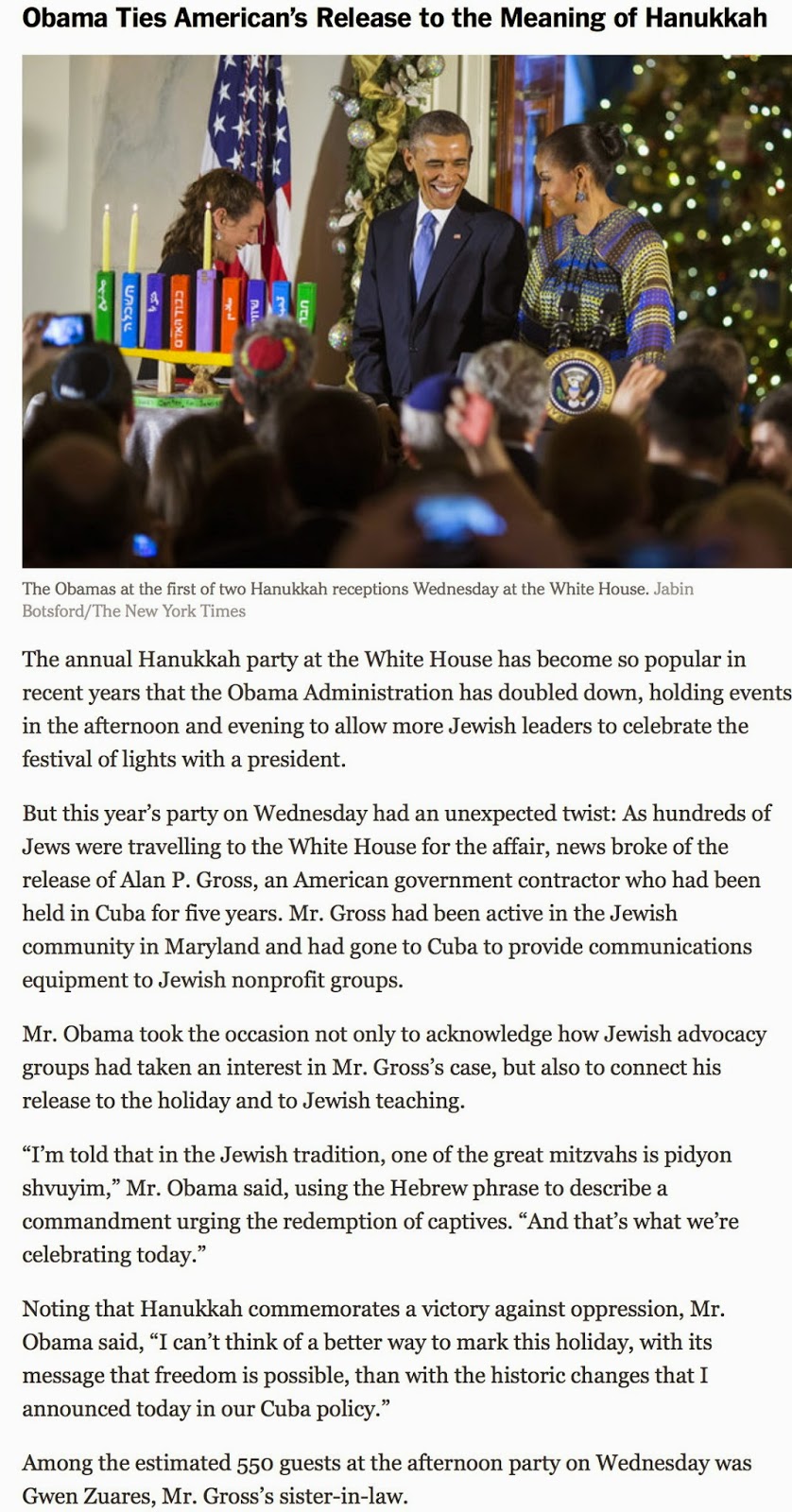 Obama Ties American’s Release to the Meaning of Hanukkah

NY Times online, Dec. 17 —  The annual Hanukkah party at the White House has become so popular in recent years that the Obama Administration has doubled down, holding events in the afternoon and evening to allow more Jewish leaders to celebrate the festival of lights with a president.

But this year’s party on Wednesday had an unexpected twist: As hundreds of Jews were traveling to the White House for the affair, news broke of the release of Alan P. Gross, an American government contractor who had been held in Cuba for five years.

Mr. Gross had been active in the Jewish community in Maryland and had gone to Cuba to provide communications equipment to Jewish nonprofit groups. Mr. Obama took the occasion not only to acknowledge how Jewish advocacy groups had taken an interest in Mr. Gross’s case, but also to connect his release to the holiday and to Jewish teaching.

“I’m told that in the Jewish tradition, one of the great mitzvahs is pidyon shvuyim,” Mr. Obama said, using the Hebrew phrase to describe a commandment urging the redemption of captives. “And that’s what we’re celebrating today.”

Noting that Hanukkah commemorates a victory against oppression, Mr. Obama said, “I can’t think of a better way to mark this holiday, with its message that freedom is possible, than with the historic changes that I announced today in our Cuba policy.” Among the estimated 550 guests at the afternoon party on Wednesday was Gwen Zuares, Mr. Gross’s sister-in-law.