Ariel Sharon and the Talmudic Mentality

THE FILE ON ZIONIST WAR CRIMINALS

Ariel Sharon and the Media's Talmudic Mentality of Holocaust Denial

By Michael Hoffman
www.revisionisthistory.org
______________
The Butcher of Beirut is dead.

Ariel Scheinermann (known as “Sharon”) died January 11, 2014. He was born of parents who emigrated to Palestine from Belarus, in the heart of the Khazar diaspora of Eastern Europe. His face was a road map of Khazaria, sharing the physiognomy of the Kagans and the rest of the Turkic tribe who masquerade as the progeny of Abraham, Isaac and Jacob and are accepted as such by the “faithful" in the pews.

Scheinermann/Sharon is not infamous as the “Butcher of Beirut” in the way that certain Germans are universally derided as the “monster of Malmedy,” the “butcher of Warsaw” and other Allied and Judaic sobriquets. Talmudic Khazarians are a protected caste and war crimes cannot be laid at their door, no matter what the actual circumstances.

Sharon the mass murderer has landed on his feet in obituaries and eulogies throughout the West as a man who ended his career “seeking peace” and “angering the Israeli right wing.” What a masterful charade.

After Winston Churchill had gleefully instigated the incineration of all the major German cities during World War II, and 500,000 German civilians had been turned to ash, he had the wit to register his regret at the conflagration that engulfed Dresden, the Allies' last major German cosmopolitan crematory, which happened to have been perpetrated on Aschermittwoch (Ash Wednesday), by the good Christians in the American and English bomber planes.

Most biographers and historians subsequently report that “Churchill regretted the bombing of civilians in German cities,” the way most journalists in early 2014 reported that Ariel Sharon was a  “hawk” (Israeli war criminals are styled by that mild euphemism), who supposedly turned toward peace. Actually, what Sharon did was engage in a little theatre for the benefit of the yahoos in America who are willing to accept that a token compulsory withdrawal of Israeli settlers from a few patches of stolen land, is tantamount to a "policy for peace."

The settlers, however, don’t go in for withdrawals, token or otherwise, and they arranged for Orthodox rabbis to place the pulsa d’nura Kabbalistic curse on Sharon, who succumbed to a coma afterward (like the victims of Haitian voodoo he may have fallen victim to his own belief in superstitious, rabbinic mumbo jumbo).

Ariel Sharon is presented in the media as not a villain, exactly, but an ambiguous, shades-of-gray, existential anti-hero, unlike the completely rotten, no-good Iranian and German war criminals. According sort the story line we are spoon-fed, no loyal “Jew” (so-called) can be wholly or even predominately evil. This is the dictate of the Talmudic mentality which governs the American media.

We anticipate the groans: Aw, c’mon, Hoffman, the media barely know what the Talmud is.

Perhaps. Nevertheless, with remarkable similitude the establishment media mirrored the Talmudic mentality. The “reasonable” and “august” exemplar of the American press, the New York Times, in its January 12, 2014 edition, devoted less than one sentence to Ariel Sharon's mass murder of civilians in Beirut in 1982:


"...the Israeli invasion seemed not to end but to take on an increasingly punishing nature, including the saturation bombing of Beirut neighborhoods..."

Notice that no casualty figure is given (tens of thousands of Lebanese were killed). This is a callous form of holocaust denial — the denial of crimes directed by Ariel Sharon.

If tens of thousands of Israelis had been incinerated in Beirut, whatever non-Jew who perpetrated that “cosmic evil unparalleled in the annals of the modern history of the Middle East,” would be branded with the Mark of Cain for the rest of his life and in lurid detail in any obituary in the corporate media.

Not so with one of the bloodiest butchers in Israeli military history who “sought peace his way.” The “reasonable, liberal” New York Times wants us to remember “The Holocaust” (i.e. every detail of what they say happened to Judaic people, circa 1938-1945), while the Times devotes exactly twenty-two words to Sharon’s mass murder of Arabs in Beirut. Obviously the massive loss of Arab life doesn’t matter count.

In the Talmud, a special category of evil is reserved for goyim and Christians. Roman emperors are burned up, reanimated and burned again, perpetually. Jesus of Nazareth boils forever in hot excrement. Rabbis, meanwhile, give God orders and defeat Him in debate.

By now some readers may be banging their heads in frustration at the chutzpah, the sheerly wrong and unjust nature of the media's hypocrisy concerning Sharon’s savage crimes — similar to the hypocrisy which the man who the Talmud situates being macerated in feces — exposed on numerous occasions some 2,000 years ago. Yet, while frustration and anger can be motivators they are not educators. Therefore, let us peer deeper into the Talmudic dictatorship over the western media.

If we were to summarize the Talmudic mentality in one word, we would describe it as pilpul, which can be detected any time a New York Times editor or a Fox News pundit is committed to "prove" his point regardless of the evidence in front of him.

Reason is not the point when pilpul rules the rhetorical roost. What counts is the establishment of a fixed, immutable position that can never be disputed: viz. Ariel Sharon cannot be a war criminal.

In this context, evidence is not primary; the status of the judge is what registers.

Consequently, “history” as written by the New York Times or broadcast by Fox News, is extra-factual; it exists without regard for the documentary record. To protest this Wonderland phenomenon would be —  you guessed it —  “anti-Semitic."

The Talmudic mentality as embodied by pilpul makes rational analysis impossible. Any dissent is criminal because it casts doubt on a point that has already been established to the satisfaction of the Talmudic media. There is no use trying to dissent inside the perimeters established by the controlled press, because any contradictory points will be twisted to validate the already-fixed position, and demonize the dissenter as either a “closet” or a “blatant anti-Semitic extremist."

What makes this process possible, in part, is the cowardice of executives in the media who see through the double-standard and are privately infuriated by it. How do we know? We have letters from some of these executives. They give us an epistolary pat on the back on occasion. Someday (when they retire) they say that they will expose the Zionist enterprise. Yeah, well, after they retire there are their wives and husbands and adult children who will advise them "not to bring ruin on us,” so these executives, who know the score, may very likely go to their graves with their tails between their legs.

This is one reason why we have some respect for the Zionists. Though they are completely wrong, they fight for their errors with all their heart, soul and pocketbook, and risk everything for it. As William Butler Yeats observed, “The best lack all conviction, while the worst are filled with passionate intensity.” 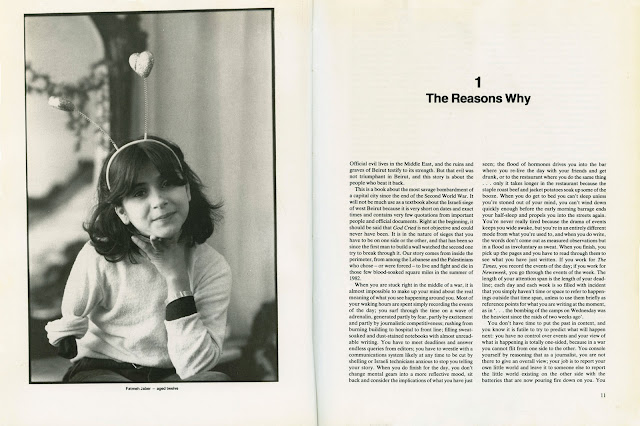 Tony Clifton's book God Cried, represents the main body of published photographic documentation of Sharon’s terror-bombing in Beirut in the summer of '82, when clearly marked schools, hospitals and apartment blocs were deliberately and mercilessly obliterated. Tens of thousands of civilians died in this now forgotten holocaust. There is still some notice taken of Sabra and Chatila, the September massacre of Palestinians by the Lebanese Phalangists under Israeli direction, but the far more horrid and extensive massacre represented by the indiscriminate aerial bombardment of the civilian neighborhoods of Beirut is almost completely forgotten, seemingly even by many Lebanese, and certainly by the US media. But until the last copy of God Cried is stamped out, the evidence of the ocean of blood on Sharon’s hands is in those pages, as it must also surely reside in the hearts of many of the unsung survivors.

In defiance of the Talmudic mentality, we protest this holocaust denial on the part of the pompous apportioners of German, Palestinian and Iranian guilt.

Post-script: Beloved children’s author Roald Dahl was appalled by Sharon’s savage bombardment. A year afterward, in August 1983, he wrote a review in praise of God Cried for the English magazine, Literary Review. If you pay a fee you can read his review online. Dahl was to be knighted by the Queen but the proposed knighthood was withdrawn after his review was published. A huge uproar against Dahl burst forth. You can read about it here.


Michael Hoffman is the author of Secret Societies and Psychological Warfare; Judaism Discovered;  They Were White and They Were Slaves; Usury in Christendom; The Great Holocaust Trial; Judaism's Strange Gods; The Israeli Holocaust Against the Palestinians, and 107 issues of Revisionist History newsletter.

Michael’s books are available here and here, as well as at this link
Browse back issues of Michael's newsletter, Revisionist History®

This column is financially supported by donations from readers

I have spent many hours vising with the plain people, the Palestinians, and ordinary Jews, who know the truth in this article. They will tell you, and only they. Bible believers need to understand that Messiah Christ will destroy ALL Zionists in Israel before he comes back to heal that land for the plain Jews and Palestinians there in his Kingdom. I have a blog item on this also: http://balaamsassspeaks.blogspot.com/2014/01/for-love-of-israel-here-is-truth-about.html

The Khazar theory is wrong. It's been proven wrong by DNA testing. It is self-evidently wrong as can be discerned by common sense. A nomadic tribe in Asia converts en mass to Judaism, and immediately takes on all the characteristics of Jews throughout the centuries? This silly theory was originated by a Judaic fraud named Arthur Koestler.

Koestler is hardly the only source for the truth about Khazar "Jews."

The Khazar DNA evidence upsets the racial hate theories of Neo Nazis who seek to create an Ewige Jude image of an eternally loathsome Israelite. It is difficult for them, to entertain the fact that today's counterfeit Israel has no connection to Isaac and Jacob's biblical progeny.