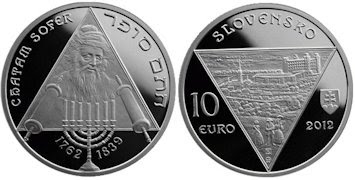 The Chatam Sofer coin issued by the National Bank of Slovakia

The "Chatam Sofer," (sometimes spelled "Hatam Sofer”), Moses Schreiber, was a gentile-hating rabbi based in Bratislavia (Pressburg), formerly Hungary, and now the capital of the independent nation of Slovakia.

Rabbi Sofer despised the unborn children of gentile women to such an extent that he issued rulings forbidding Judaic medical personnel from assisting gentile women in giving birth. By refusing to help them, Sofer's Judaics avoided what the rabbi termed "multiplying the seed of Amalek." (1)

Rabbi Sofer so hated gentiles that he sought to sufficiently embellish the language of Yiddish so as to establish it as the completely separate, premier Judaic language, thereby eschewing the languages of the goyim, in keeping with the Eighteen Degrees of Separation decreed by Beis Shamai and Beis Hillel in the first century A.D. (2)

The western banking sytem, alleged by apologists to be merely a rational financial enterprise, has been entwined with the occult since its inception. Corroboration of this fact comes from Slovakia, specifically from the National Bank of Slovakia, whose headquarters building, dedicated to the Euro currency, bears a resemblance to a completed version of Pieter Bruegel the Elder’s 1563 painting of the unfinished Tower of Babel. 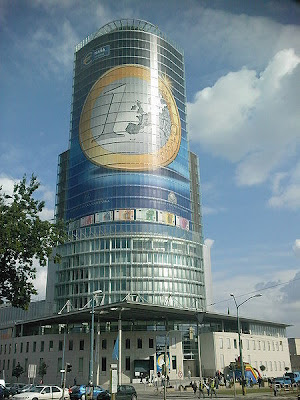 This month the National Bank of Slovakia issued a silver coin honoring the life of Rabbi Sofer. (3) The coin features male and female (upward and downward pointing) triangles, obviously intended to symbolize the two parts of the Kabbalistic Seal of Solomon icon (often as misrepresented as the "Star of David").

"Many esoteric traditions, including Jewish Kabbalah and Hermeticism - ancient Alexandrian and Renaissance - resort to this occult Solomon as the patron of magic and alchemy.” (4)

Note that the preceding statement refers not to the Biblical Solomon, but to the "occult Solomon," just as there are two Noahs, the Biblical Patriarch, and the occult Noah of the Talmud, Midrash and "Noahide" laws. (5)

Rabbi Sofer was a backward bigot whose “scholarship” oppressed thousands of Judaics who sought to free themselves from Talmudic Judaism during the "Haskalah," even as he helped to institutionalize ever deeper, Orthodox Judaism's savage contempt for the goyim.

The sinister Chatam Sofer was an oppressor and enslaver, the opposite of a liberator. Why would a modern East European bank, a member of the European Union whose country is part of NATO, adopt an occult symbol and use it to honor a fundamentalist bigot who hated gentiles, as well as any Judaic person who tried to get free of the suffocating "Oral traditions" of the Talmudic-derived halacha, which micro-manages the lives of every frum Judaic?

Is the coin intended as a form of propitiation of the dark forces represented by the love of money?

Coupled with the minting of this silver coin is the invocation of the graveyard-and-corpse cult which is central to the Kabbalah, in this case the newly refurbished grave of Rabbi Sofer.


Here is the June 26, 2012 press release from the World Jewish Congress:

The National Bank of Slovakia has issued a new coin marking the 250th anniversary of the birth of Chatam Sofer (1762-1839), one of Europe's most noted scholars of the Talmud and founder of the Bratislava Yeshiva which continued as a primary institute of Hebrew education until the outbreak of World War II.

Born in Frankfurt as Moses Schreiber, Sofer traveled to Moravia (now part of the Czech Republic) as a scholar in 1782 where he became recognized as an authority in the teachings of the Talmud. The yeshiva he founded in Bratislava in 1806 eventually became the most influential institute of Hebrew studies.

The graves of Sofer and other Jewish scholars were covered by a tramway after World War II, but have since been restored. The site is now a memorial managed by the local Jewish community and draws a great number of visitors every year.

The € 10 silver coin is the work of designer Pavel Károly and depicts a portrait of Sofer inspired from an oil painting by Ber Frank Halevi's original drawing.

The depiction is placed within a triangle, one half of a traditional Star of David, and a menorah is positioned below the portrait. His year of birth and death, 1762 and 1839 is seen on either side of the menorah. The scholar's name is placed around the upper left edge and the same – in Hebrew letters is positioned on the right side.

The reverse design includes a scenic depiction of the Slovak capital Bratislava during the time of the founding of Sofer's yeshiva. (End quote from the World Jewish Congress).

3. The coin was struck at the Kremnica Mint on June 18, 2012 in both proof and FDC or UNC quality. Both versions are minted in .900 fine silver with a weight of 18 grams and a diameter of 34 mm. Mintage figures for the proof version is authorized at 7,900 coins and the FDC version has an authorized mintage of 5,800 coins.

Michael Hoffman’s On the Contrary column is a public service of Independent History and Research, Box 849, Coeur d’Alene, Idaho 83816 USA. Our catalog of books, recordings, newsletters and pamphlets is online at http://revisionisthistorystore.blogspot.com/

The Elite seem to have an overwhelming fondness for occultic symbology. Once you learn some of their thinking on these things, the symbols start popping out at you.

Yeah, they sure do. I often think the occult crap (and "crap" is exactly what it is) is all a lot of really badly-done theater from really odious people, but Hoffman and others I respect think it's something more sinister, and I often worry that they are right.