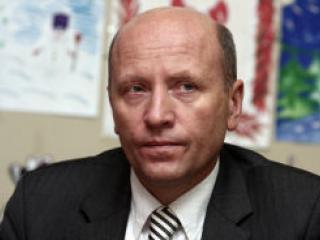 Petras Stankeras
by Michael Hoffman • www.RevisionistHistory.org
Efraim Zuroff’s tirade against Lithuanian “Holocaust denial" (see below) is a textbook example of the Talmudic inquisition at work. I say “Talmudic” because the notion of a supreme level of cosmic suffering and horror far above that of any non-Judaic nation is a thoroughly Talmudic prerogative of the Master Race of Holy People. Lithuanian historian Petras Stankeras can’t question the kangaroo Nuremberg Trials because such questions offend the Master Race of Holy People. Mr. Stankeras can’t question the magical Six Million figure because such questions offend the Master Race of Holy People, and for the same reason he must not state the fact that there is no document from Hitler ordering extermination.
“Blatant Holocaust denial” is a loopy pseudo-legal term cooked up by Deborah Lipstadt and then universally imposed on the language of the world by the poor persecuted ones. This is heresy-hunting, not law or history.
Notice how Mr. Zuroff feels free to accuse the entire nation of Lithuania (“Lithuanian society”) of deep-seated dishonesty and guilt for horrible crimes. But don’t anyone dare say such things about Israeli society! By the Talmudic standard, Judaics are the judges of the gentiles; gentiles are never fit to judge Judaics. Negative generalization about Israelis is a step on the road to another victimizing ‘Holocaust,” while negative generalization about “Lithuanian society” is a righteous corrective against a nation of “Holocaust” criminals.
This is the Talmudic double-standard that Lithuania must swallow if they want to be a "member in good standing of the European Union and Nato.” This is the reverse racism that historian  Petras Stankeras must embrace if he wants to restore his career and gain back his position in the Ministry of the Interior.
The most heinous offense of all on the part of the Lithuanians is to dare to even think for a moment that what their nation suffered under Soviet Communism, including at the hands of Christian-hating Soviet Judaics, was in any way equivalent to what the Mater Race of Holy People experienced under the Nazis. How dare any gentile for even a moment compare his or her family’s suffering to that of the Holy People! Outrageous!
Efraim Zuroff:
"Lithuania has been the leader of a insidious campaign to try to distort the history of the Holocaust by seeking recognition that Communist crimes were just as terrible as those of the Nazis. This false equivalence would unjustly rob the Shoah of its universally-accepted uniqueness and historical significance, turning the worst case of genocide in human history into merely one of many tragedies.”
According to the Talmud, in all things, Judaics are higher, more noble, more suffering, more persecuted than non-Judaics. There can be no equality (“equivalence”) between the two, most especially in the realm of war crimes and genocide upon which Judaics have a proprietary (and lucrative) trademark.
Not to worry, however. Hannah Rosenthal, the U.S. government’s "special ambassador to combat antisemitism”  has arranged for a massive “Holocaust" education indoctrination “seminar" for Lithuanian teachers, who will be taught to know their place as inferiors and dutifully conform to the Talmudic hierarchy of victimhood.
***
US must take a tougher line on Baltic revisionism
Why has the US remained silent while European nations roundly condemn Holocaust denial by a Lithuanian government official?
Efraim Zuroff
guardian.co.uk, Monday 29 November 2010
The resignation late last week of historian Petras Stankeras from his post as a "senior specialist" at the Lithuanian ministry of the interior received little attention in the US, but the scandal that prompted his decision to give up his job should set off a red warning light in Washington, and especially in the state department and the US embassy in Vilnius.

The story began two weeks ago with the publication in the 8 November issue of the popular news weekly Veidas of an article by Stankeras to mark the 65th anniversary of the opening of the Nuremberg Trials in which he described the proceedings as a "clearly wrong judicial investigation", and openly and unequivocally denied the Holocaust. According to the now former government official, one of the major failings of the Nuremberg trials was that they "provided a legal basis for the legend about 6 million supposedly murdered Jews, although the court did not have a single document signed by Hitler on the extermination of Jews (no one has found this document to this day, if it even exists, although a million-dollar prize has been promised).”

While such a blatant assertion of Holocaust denial has never been the norm in Lithuania, a member in good standing of the European Union and Nato, anyone closely following the policies of the government on Holocaust-related issues over the years could not have failed to discern a deep-seated reluctance to honestly confront its Holocaust past and especially the extensive collaboration of local Nazi collaborators in the mass murder of Jews, primarily inside Lithuania, but outside its borders as well. From an abysmal failure to punish any of the Lithuanians who participated in the annihilation of Jews to a clear tendency in history books and textbooks to hide or minimise local complicity in Holocaust crimes, to a total failure on the issue of restitution, Lithuanian society has not even begun to tell the truth about its Holocaust history and truthfully deal with its implications.

Worse, Lithuania has been the leader of a insidious campaign to try to distort the history of the Holocaust by seeking recognition that Communist crimes were just as terrible as those of the Nazis. This false equivalence would unjustly rob the Shoah of its universally-accepted uniqueness and historical significance, turning the worst case of genocide in human history into merely one of many tragedies.


All this has been going on with increasing intensity in recent years, virtually unopposed and unchallenged, neither within the European Union nor in Nato, but Stankeras' article has now proved the catalyst for action in Europe. In a letter signed by the ambassadors to Lithuania of six EU members – Britain, Estonia, France, Finland, Netherlands, Sweden and Norway – there is not only an unequivocal and strong condemnation of the Holocaust denial and the lack of any public or official Lithuanian protest, but for the first time, there is an open denunciation of Lithuanian efforts to create a false equivalency between Nazi and Communist crimes. The letter condemns the recent decision of a court in Klaipeda to allow the use of swastikas "as a traditional Lithuanian symbol", and goes on to denounce "Spurious attempts … to equate the uniquely evil genocide of the Jews with Soviet crimes against Lithuania, which, though great in magnitude, cannot be regarded as equivalent either in their intention or their result."

...this week, the US embassy in Vilnius is conducting a special Holocaust education seminar for Lithuanian teachers, financed by a grant announced by Rosenthal (Hannah Rosenthal, the US "special ambassador to combat antisemitism” -Ed.) during her visit to Lithuania this past spring....


Comment from a  reader:
Why on earth would anyone imply that crimes committed towards Jews by the Nazis is somehow worse than crimes committed towards other ethnic groups by the communists? Do you have any idea of the type of tactics they used? Everything ranging from execution to torture to starvation! And they killed by far many times more people than the Nazis ever did. Furthermore, they did attempt to wipe out complete ethnic groups. What about the Ukrainians in the Holodomor? Six million starved Ukrainian men, women, and children. No big deal to the person (Zuroff) who wrote this piece though right?