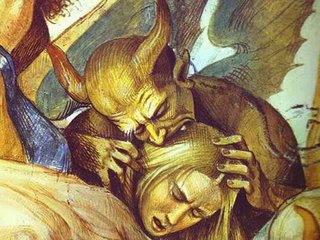 
I am often mocked for stating that Talmudism is a form of anti-Judaic hatred.

This is a big laugh to my detractors.

The mockers seem to have conveniently forgotten, however, that Jesus Christ's mission was to free Jews from the type of covert Jew-hate and micro-management which is what Phariseeism and its successor, Orthodox Judaism and its holiest book (the Babylonian Talmud), surely constitute.

The devil has arranged for Judaic people to suffer grievously with
enormous legalistic burdens, pathological anxiety and Babylonian
superstition imposed upon them by rabbis known as "halachic
adjudicators." These "holy sages" contradict and overthrow the Bible.

In our upside-down world, Christians such as this writer are styled
“anti-Semitic" for seeking the freedom and happiness of Judaics, while Talmudic rabbis and their Catholic and Protestant co-conspirators pose as defenders of Judaics—by keeping them in thrall to insane, oppressive, pagan superstitions.

Consider the ruling of the influential late Rabbi Yisrael Abuhatzeira, who declared that Judaic women will burn in hell for wearing fake wigs!

This ruling was reaffirmed by the revered Orthodox Israeli Rabbi Ovadia Yosef. (See the report below).

To seek the liberation of Judaics is a lonely vocation when
Christ-betraying Churchianity and the media have a vested
interest in portraying liberators as oppressors, and the real oppressors as "defenders of the 'Jews."

(Hoffman is the author of Judaism Discovered: A Study of the
Anti-Biblical Religion of Racism, Self-Worship, Superstition and
Deceit).

Rabbi Yosef comes out against wig-wearing

'Religious authorities have ruled they are forbidden. Baba Sali said those who wear wigs will be burned in world to come'

During his weekly Saturday night lesson, Rabbi Ovadia Yosef...the Shas spiritual leader, addressed the large number of religious women who wear wigs as a form of head covering, particularly among the women of Ger Hasidism.  "A woman wears a wig. Why? There are Ger Hasids who are lenient as if Ger Hasidism is the entire world. This is not true. The religious arbiters wrote explicitly that this is forbidden, that this is grave," said Rabbi Yosef.

To back up his statements, the rabbi quoted a series of both Ashkenazi and Sephardic halachic adjudicators that forbid "fake wigs," such as the Vilna Gaon and Hatam Sofer.

In order to demonstrate the severity of the matter, the rabbi told of a man who went with his wife to see Rabbi Yisrael Abuhatzeira, also known as the Baba Sali, in order to ask for a blessing:

"He asked him why is she wearing a fake wig? He answered that is the custom.

Rabbi Yosef called his listeners to be more stringent during the ten days of repentance with matters they are lenient on during the year, such as glatt meat and head coverings for married women.

I would like to know more about this "Baba Sali" individual. It seems that he is considered something akin to an 'ascended master' in Jewish spiritualist circles?

You are a lost soul my man! Your basis of information is based on some floating universe grounded in fantasy. The Oral Torah is as integral a part of the Torah as the 5 books of Moshe! Let me ask you if the book of Devarim says (Deuteronomy 34:10) "that there was never a Prophet like Moshe and there will never be." Yet you assume Jesus, a Jew who followed both the Oral and written Torah, preached something other than the Oral Torah (The Talmud?) Or are you saying you know a bit more than Jesus did and YOU are the one who disbelieves the Torah (Oral and Written). Since Moshe was the greatest prophet according to the written law which you apparently accept, and considering that Moshe was the author of the Oral Torah which he learned by askeing G-d things like "Master of the Universe, may Your Holy Name be blessed, what is the meaning of Devarim 6:8 "...you shall bind it as a sign upon your arm and it shall be a reminder between your eyes...." "How do I fullfill that commandment Father?" The answer is that the laws of that are clearly spelled out in the Garmara.