The Pope in Scotland and England: Conscience in Crisis 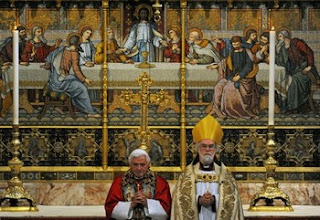 Pope Benedict XVI has pulled off quite a coup over the past few days. He has charmed the Scots and the English and been embraced by the masonic British establishment, beginning with "Her Majesty" the Queen. The promised massive opposition from atheists fizzled. The British Secret Service did an efficient job of mounting a fake Algerian "terror threat" that was key to shifting sympathy toward the pope, causing him to be seen, almost from the beginning of his state visit, as an embattled target of extremists.

Catholics can wax enthusiastic over his "triumph" only if they are willing to adopt the double mind. I was saddened watching on EWTN, Joe Pearce, the English Catholic historian who knows better, praising the pope for his outreach, which included praying with Anglicans. Hundreds of Catholics were tortured and killed in the reigns of Edward VI, Elizabeth I and James I for refusing to do what Pope Benedict did. If the Pope's actions were correct, then those martyrs died for nothing. If the martyrs were correct, then the pope is a traitor to 450 years of Catholic recusant heroism and sainthood. The failure of informed Catholics like Pearce to even confront the contradiction, shows the extent to which "obedience" and subservience to hierarchical order continues to take precedence over Truth in the modern Roman Catholic Church.

This failing is at the root of the child molestation scandal, as well. That coverup depended upon the bureaucratic belief that one does not expose priests and bishops to negative publicity or prosecution. Under Pope Benedict XVI, notorious molestation facilitators such as Bishop William Skylstad of Spokane and Cardinal Roger Mahony of Los Angeles are being allowed to serve their full term and then retire with all the prestige and riches of their office, instead of being sent to prison, where they belong.

The pope offered unqualified praise for the British establishment for its fight against the "Nazis." Benedict spoke of the horrors of the Nazi bombing of Coventry without saying a word about the British fire-bombing of Dresden. "His Holiness” did not mention the fact that it was the British who initiated the bombing of cities. The Germans had not bombed any city in the British Isles until Churchill ordered attacks on German ones. To their everlasting credit, during World War II certain Anglican churchmen stood in the House of Lords to condemn Britain's merciless collective punishment of the German people for the crimes of their leaders, a monstrous and wholly unchristian Allied doctrine which remains in force in places like Gaza.

Most intriguing of all the developments in the pontiff's sojourn in Britain, is the remarkable public emergence of what was for centuries a great secret: the symbiotic relationship between the Neoplatonic imperium that gained purchase inside the Vatican beginning with the Renaissance, and the masonic cryptocracy of Britain -- two seeming opposing forces -- now shown to be in alliance.

Lastly, the pope beatified (raised to near-saint status) the Victorian savant and Anglican convert to Catholicism, John Henry Newman. When asked, in the 19th century, to toast the pope, Cardinal Newman is reported to have said, "To the pope, yes, -- but to conscience first." Cardinal Newman's standard should be our own in this time of crisis, as we observe the shenanigans of the wily Benedict XVI and his apparatchiks, inside the Vatican and beyond.


Hoffman is the author of Secret Societies and Psychological Warfare. He writes from Coeur d'Alene, Idaho.

I lived in Wimbledon for many years, my children went to Catholic schools there, although I'm not religious. Not once did anyone point out that 54 Parkside (where the Pope stayed on his recent visit) was the Vatican Embassy. I must have passed it thousands of times.
These things are not mentioned in the mainstream media.
The Universal Church is portrayed as a dying institution, full of elderly, kiddy-fiddling priests. Not as the massive power it certainly is.

Please pardon my grammar, for I am not a writer.

Did not King John, prior to the signing of the Magna Charta surrender to the Pope?
My understanding is that the Pope declared the Charta null and void, not for reasons of granting rights to the Barons, but because it was signed under duress, with a dagger to the King's throat.

Would not this surrender have important implications up to the present day?

As an aside, I read The Treaty of Paris 1783 recently. I had been thinking about the American "Revolutionary" War.

I could find no surrender by King George in it. But, I did find that the King had absolved himself of all his financial obligations towards the Colonies. Most importantly, he guaranteed that all debts he was owed would be paid to himself, his heirs, and successors in perpetuity. A sum which America still pays towards today.
These treaties appear to be adhered to rigidly by the Masonic powers and no leeway is permitted at all.
Anyway, enough of my rambling. Respect to you, my good sir. :-)

These treaties appear to be adhered to rigidly by the Masonic powers and no leeway is permitted at all.

This is a new one on me, freemasonry as an ally to monarchy. Things must have changed quite a bit since then.

Dear Sir,
Your article really provides truth-seekers with food for thought. Your work of historical research and analysis is much-needed in this age of "Big Brother". Keep exposing the darkness with light.

It is frightening indeed that there exists such intellectual aridity and moral cowardice on the part of Catholic historians to confront these transparent hypocrisies. Even amongst your readership it is sad to find that this particular post has not garnered much attention ; which I can only accredit to people's profound ignorance of the gargantuan significance of the Bishop of Rome's first trip to Britain and his subsequent occult mockery of the English Martyrs.

As far as our audience goes, Internet ratings for this blog are respectable - check Alexa.

Comments on individual posts have gone down from previous months because we recently eliminated the ability to post anonymously. We wanted more serious contributors who were willing to take at least minimal responsibility for their comments.

I made no mention of the amount of traffic your site receives, but the lack of "serious contributors" commenting upon this particular post.

deserves serious consideration and study and I was only saddened by the seeming lack thereof.

What are you guys talking about? The Holy Father did nothing wrong. Catholics are allowed to pray with people of other faiths as long as they don't renounce the Catholic faith. In no way, did the Holy Father offend the martyrs of the Church.

I wonder if you know anything about the history of the Reformation in England? Have you read Michael Davies' book, “Cranmer’s Godly Order”?

In the reigns of Edward VI, Elizabeth I, James I and subsequent British monarchs, Roman Catholics were ordered to attend the prayers services of the Anglican Church, which was the state church. Upon their refusal Catholics were viewed as wicked persons. Continued refusals to participate would lead to fines and imprisonment and in some cases, execution.

I repeat: Benedict’s participation made a mockery of their deaths. Apparently they died for nothing.