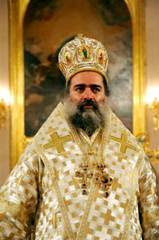 “Pope Benedict is not welcome in the Holy Land in the present circumstances", - said Archbishop Theodosius of Sebaste, the highest ranking native Palestinian Christian clergyman in Jerusalem, after it was announced in Israel that the head of the Church of Rome will begin his May pilgrimage to the Holy City with obeisance to the Jewish Holocaust Memorial ‘Yad Vashem’.

Tall and fortyish, blue-eyed, of commanding presence, the Galilean-born Archbishop is a citizen of Israel, an outspoken critic of Jewish excesses and a most visible supporter of the One Democratic State idea calling for full equality for Jew, Christian and Muslim in the whole, undivided Holy Land. Archbishop Theodosius Atallah Hanna is a man of his own mind: he refused to meet with President Bush, befriended the Muslim Mufti of Jerusalem and defended Pope Benedict when he was attacked for what was considered anti-Muslim talk. Now he expresses the feelings of many Palestinian Christians, this oldest Christian community in the world. While the Church of Rome was established by Christ’s apostle St Peter, the Church of Jerusalem was established by Christ Himself. In many villages and towns of the Holy Land memories of the Saviour’s presence still linger. The majority of Jerusalem Christians belong to the Archbishop’s Orthodox church, while a minority are Catholic.

Regarding the papal visit, the Catholics and the Orthodox are of one mind. Before the Gaza war, Father Manuel Musallam, head of the Roman Catholic Church in the Gaza, said that it is Gaza’s right not to die, and if it dies it will be in the battlefield. The Catholic believers, priests and monks of the Holy Land forwarded the Pope a secret letter calling on him to postpone his visit to some future time. The Vatican read the letter but decided to disregard it. Now, when the blood shed by Jews in Gaza is still warm, Israel will certainly portray this visit as a sign of papal approval.

“If the Pope wants to come to the Holy Land, he should begin the visit by coming to the local Catholic church in Gaza", said Archbishop Theodosius Atallah Hanna. "The church was denied visits by the priests and bishops, and Gazan Christians were unable to worship in Jerusalem and Bethlehem. At first, the Pope should meet with Palestinian Christians, who carry the light of Christ in the darkness of Israeli occupation. Otherwise, this is not a visit to us, but a visit to Israel, an item on the Pope’s agenda vis-à-vis the Jewish organizations. We ask the Pope to speak for the people of Palestine, for Palestinian Christians are part and parcel of Palestine. Palestinian Christians suffer together with their Muslim brothers. Let the Pope advocate our cause”, said he.

Many Palestinian Christians feel that the Vatican has become a plaything of Jewish intrigues. Why does Vatican spend so much effort trying to woo and please the Jews? Is not the Church of Rome still an independent body? Why is the See of St Peter heeds to Jewish veto even regarding church affairs?

The Pope’s visit to the Holocaust Memorial is troubling.

The Museum adjacent to Memorial contains some rude defamation of the late Pope Pius; and the Jews have refused to remove it.

Even worse, the Holocaust is used to justify mass murder in Gaza; coming first to Yad vaShem sends a wrong symbol of accepting Jewish superiority over Christendom.

Moreover, the Holocaust Memorial is a religious symbol, an idol of a new heathen, godless cult.
Its boss Dr Judah Bauer has openly denied God and the Creation, while its previous boss is considered a war criminal and his extradition is being sought.

Tom Segev, a prominent Israeli writer, correctly said that the Holocaust has become "an object of worship." Abraham Foxman, head of the Anti-Defamation League has declared: “The Holocaust is a near successful attempt on the life of God's Chosen children and, thus, on God himself”.

We know of a near-successful attempt on the life of God’s Son, and thus on God Himself, and it took place in Jerusalem, on Calvary. Yad va-Shem is a pretender, a place of idolatry. Abraham refused to pay obeisance to idols -- why can’t the Pope follow his lead?

The forthcoming visit of the Pope was engendered by a ruse: traditionalist Bishop Msgr. Williamson was re-communicated with the Church, and at the same time his interview regarding the Jewish holocaust was aired. The scandal was enormous. If Williamson were to blaspheme Christ and the Church he would be applauded for his free mind; as things are, the Pope was forced to beg forgiveness of his "elder brothers the Jews," and even depart on this Canossa-like trip with its scheduled meetings with Israeli war criminals.

In Palestine, the Pope and the Catholics may learn a thing or two from the Church of Jerusalem. Despite its minority position in the Jewish state, the Orthodox Church is still free and un-subverted. Its theology is shiningly, implacably triumphalist; we believe in Christ and in victory of Orthodoxy as we celebrated it last Sunday, the first Sunday of Lent. Our Church is universal and catholic, for we of Jerusalem and Moscow, Antioch and Constantinople are joined by one communion, though we do not have a single shepherd. We have no elder brothers; we have no Zionists in our midst. We have no special relations with Jews – unless they want to join. We reject heresies, and we do not hesitate to anathematise heretics, including the popes of Rome who went too far in their desire to submit to worldly powers. Our Church does not seek better public relations, she does not change her rules in a vain attempt to attract more worshippers. She venerates icons, but does not bow down to idols.

I would love to see our Holy Father go straight to Gaza to tend to His children first--rather than to pay homage to the pretender, the Holocaust memorial. Why on earth are the Christians who died and those suffering in Gaza less important than the Jews who died in Hitler's camps? Could the Holy Father not at least take advantage of the opportunity to remind the world of a far greater holocaust--abortion?

Excellent article! Thank you Michael Hoffman & thank you Maurice Pinay for bringing articles of such fearless pursuit of truth to light!

This is a great post - I perfectly agree with it. I am a Catholic but was born in an Orthodox country and know very well its traditions. If not absolutely immune to all secular influences, especially during the communist regime, and to some Zionist pressures too, the Orthodox Churches were never prone to change anything in their teaching and their apostolic mission in order to placate ill feelings of Jews or of believers of other religions.
Martin

Michael, I have been keeping an eye on the Jerusalem Old City Initiatives out of Canada which is proposing the Old City of Jerusalem to become a special City State Regime. CFR's Foreign Affairs has an article entitled "The Missing Peace". I posted this info on my blog, I thought you guys would be interested in this.

On a different topic, yesterday was the second day of Purim. The news was replete with stories of the shootings in Samson, Alabama. What are your thoughts in regard to putting the name of the Old Testament Samson in the minds of the populace on the second day of Purim? Then, people woke up to news of a similar rampage in Germany. Is there a pattern here?

The Vatican's slavish truckling to Jewish demands is one more reason we should curtail our tithing to the institutional Church.

You heathen necromantic iconolaters have the nerve toban Psalm 150 organs? When will you learn that America was alwasy Judeo-centric? Columbus set sail with shiploads of Jews the day after the Spanish Inquisition expelled Jews. The Plymouth Pilgrims were followers of Cromwell who brought the Jews back to England. God helps those who help the Jews. Greeks must not be allowed to revive their tsar-build islamo-soviet temple on world trade center sacred ground! Greece has always been a state conduit of islamosoviet terrorists. THey don't let us preach the Gospel in their land, so why should they have temples here? On the Thursday before Easter Greeks chant pogrom inciting Beatitudes against "godslaying lawless Jews"in Greek, but change it to "Assemby of Jews" in English. They removed American Archbishop Iakovos because he was too American and Jerusalem Patriarch Irineos because he was too friendly with Israelis. Old witches who used to work at diners until they dropped now slip "Elder Protocols" and other terror claptrap in the pews. When I was growing up priests, would bathe, shave, wear pants - Robed, bearded, stovetopped priest is terror sympathist by definition. Greece was only euronation not to vote for 1947 Israel creation. In such time of war, we should insist that any public assembly of more than ten mandatorily be only in English! We have freedom of worship and speech, but not language.