"Tales of the Holohoax" and Denmark's anti-Muslim cartoons

Satire demonized and criminalized in Britain
by Michael Hoffman 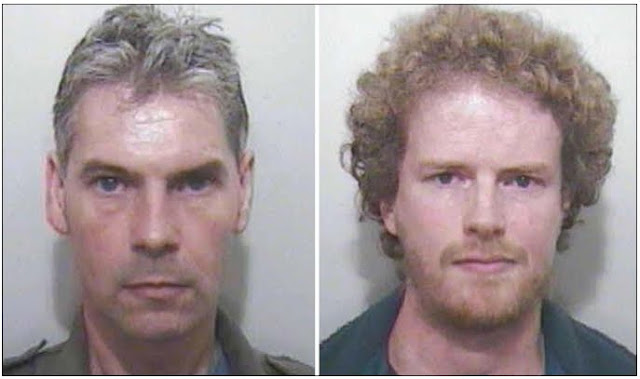 
One grows weary of pointing to the disparity between how "Holocaust" revisionists and Muslim haters are treated in the media and the courts both legal and of public opinion. Kurt Westergaard, the artist who drew the anti-Mohammed cartoon in Denmark is a hero of the European Union. His "freedom of expression" is jealously guarded, and used as a pedagogic tool for hammering Muslims concerning the glories of modern Western human rights' standards. When Muslims respond that the Danish cartoon was bigoted and racist, they are dismissed as backward peasants from Neanderthal societies who have yet to learn the rudiments of Enlightenment tolerance.

Meanwhile, revisionist expression concerning Talmudic Judaism or the alleged execution gas chambers of Auschwitz is another matter entirely. In the latter case, the "racist" pejorative is gleefully pinned on revisionists by the media and the courts, thereby acting as a solvent for weakening any claims to apply the western heritage of freedom of the press to revisionist writers or satirists.

Hence, Simon Sheppard, who received a lengthy prison sentence in part for distributing in England this writer's satirical comic book Tales of the Holohoax is described by all British media, from the snooty BBC to the proletarian "Sun" newspaper, as a "racist."

The unjust assignment of this pejorative is the impregnable wall that has been erected to isolate Mr. Sheppard's case from that of the anti-Muslim Danish cartoonists, and causes him to forfeit the civil liberties protections of Europe's supposed guardians of freedom against Islamic fundamentalism. The possibility that Europe might need to be guarded against the racist tyranny of fundamentalist Orthodox Judaism is policed out of consideration.

What precisely is there that is "racist" about the Tales of the Holohoax cartoons? The media do not scruple to attempt an analysis because they are under no pressure or obligation to do so. Satire is only a noble weapon when it is used against "demon Islam," while Judaism and Holocaustianity are sacred dogmas in Europe. Satirizing these sacred cows is a "disgusting hate crime."

Westergaard is portrayed as a defiant saint, while Mr. Sheppard and his partner in "criminal" satire, Stephen Whittle (they are known collectively as the "Heretical Two"), are less than zero in the eyes of the Western gatekeepers of morality and history - "race hate criminals" - in the purple prose of the BBC. The fact that these two have been stigmatized as "racist" is sufficient to render the stigma a reality, even when the facts bear witness to the contrary.

The "revisionist community," with some notable exceptions (Lady Michelle Renouf, Dr. Robert Faurisson, Willis Carto, Herman Otten) is reluctant to mention Tales of the Holohoax in connection with the plight of the "Heretical Two." The publication itself and the heretics who circulated it would now be a cause célébre if the current "revisionist community" had any of the public relations instincts of Ernst Zundel.

In the 2009 Christmas list of imprisoned revisionists and their jailhouse mailing addresses circulated around the Internet and published in certain revisionist newsletters, under the names Sheppard and Whittle the reason given for their incarceration was an oddly generic one: "sought asylum in the U.S." But the reason they were asylum seekers was noticeably absent. By this omission, reference to Tales of the Holohoax and its author were sent down the memory hole -- by revisionists themselves.

I have seen no sustained analogy concerning this writer or Mr. Sheppard, and Mr.Westergaard. And since it has been decided that Tales of the Holohoax shouldn't be mentioned or discussed, no parallels are drawn between this writer's satirical gas chamber cartoons and the anti-Muslim ones in Denmark. A magnificent opportunity is thereby lost.

Culpability for this loss also rests with the Muslim and Arab media who have failed to compare the two sets of cartoons and the fate of the distributors.

No European has gone to jail for satirizing Islam or its prophet. On the contrary, the defiance of the Danish cartoonists is celebrated, rewarded and protected, while Sheppard rots in a British prison for distributing a satire that pokes fun at Talmudic tall tales recycled for modern consumption during and after World War II.

A RACIST man has lost his appeal against the UK's first conviction for inciting racial hatred online. But the Court of Appeal in London did reduce Stephen Whittle's sentence of two years and four months by six months. Another man, Simon Sheppard, who was also convicted of inciting racial hatred, had his term of four years and ten months cut by a year. Whittle, 42, and Sheppard, 52, were jailed at Leeds Crown Court in July last year after they were charged, under the Public Order Act, with publishing racially inflammatory material, distributing racially inflammatory material and possessing racially inflammatory material with a view to distribution. Whittle, from Preston, was found guilty of five offences and Sheppard, of Selby, North Yorkshire, was found guilty of 16. During their first trial in 2008, they skipped bail and fled to California, where they sought asylum claiming they were being persecuted for their right-wing views, but were deported. The police investigation began after a complaint about a leaflet called Tales of the Holohoax, which was pushed through the door of a Blackpool synagogue and traced back to a post office box in Hull registered to Sheppard.

Published material found later included images of murdered Jews alongside cartoons and articles ridiculing ethnic groups. At the appeal, Sheppard's counsel, Adrian Davies, challenged the convictions on the grounds of jurisdiction, the meaning of "publication" and whether the material on the internet was "written material" within the meaning of the Act. He said the articles complained of were posted on a website in California where there was no doubt that they were "entirely lawful and enjoyed the highest degree of constitutional protection under the laws of the United States."  There was no evidence that anyone in England and Wales, except for the police officer, who the Crown did not rely on as a member of the public under the Act, had ever read any of them. "Despite this, Mr Sheppard has been sentenced to a longer term of imprisonment than Abu Hamza," he told Lord Justice Scott Baker, Mr Justice Penry-Davey and Mr Justice Cranston. Giving their ruling, Lord Justice Scott Baker said the trial judge was right to hold that he had jurisdiction to try the pair because a substantial measure of the activities constituting the crime took place in England. He said the judge had also correctly addressed the issue of publication - the material in the case was available to the public despite the fact that the evidence went no further than establishing that one police constable downloaded it. And the words "written material" in the Act were sufficiently wide to include articles in electronic form. On the question of sentence, he noted that the judge had said he had rarely seen or read material that was so abusive and insulting in its content towards racial groups in this country. (End quote)

Legal judgment against distributors of Tales of the Holohoax cartoons

The Massacre of Charlie Hebdo in Paris