It’s not a "coincidence"

If you haven’t read Michael Hoffman's book, Secret Societies and Psychological Warfare you may not be able to understand the connection, or recognize the sub-rosa signal to the Group Mind: 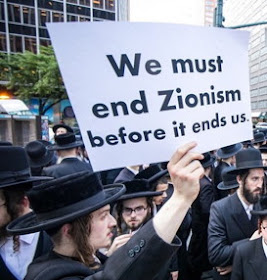 I have the book (Secret Societies and Psychological Warfare), I've read the book and I still have difficulty cyphering the twilight language! I'm consigned to bring processed in ignorance. Unless you enlighten me!

The supposition is that at a hypnotic level of public, subconscious “Group Mind” cognition, a link was made and brazenly shown (within 24 hours) between the attack on the anti-Zionist Satmar Judaics at the kosher grocery store and Trump’s executive order silencing those (like the Satmar), who are engaged in educational efforts demonstrating that Zionism is a racist, Nazi-type ideology.

This twilight language communication is a sort of evil-doers’ joke on the dead Satmar Judaics and all those people, Judaic and non-Judaic, whose humanity is dismissed and are therefore expendable, because they will not idolize the “Holy State” of "Israeli."

There is a surfeit of Jew-haters who adore the Israeli state because they believe it to be a successful prototype for neo-Nazi type of rule in their own nations. They escape being silenced by Trump’s executive order, as well as death at the hands of mind-controlled assassins. Theirs is the establishment-condoned neo-Nazism that operates from the subterranean bowels of the Cryptocracy.

The fact that Hitler’s Nazism is a template for Israeli leaders (religious and secular) is one of the worst-kept secrets of our time. Only the western media profess to know nothing of it. 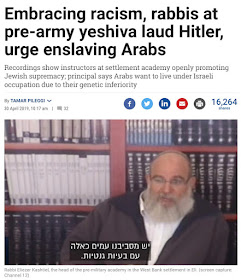 Earlier this year, Zionist Rabbi Giora Radler, addressed the elite Bnei David academy for Israeli military youth as follows:  “Let’s begin by asking the question: was Hitler right or not? He is the most correct person there is. He was definitely right in every word he said. His ideology was correct. There is a male world which fights, which deals with honor and the brotherhood of soldiers. And there is the soft, ethical feminine world which turns the other cheek.”

I have been fascinated since childhood with stage magic and have attended magic shows in order to study the magician’s misdirection—the foundation of the successful execution of so much of the psychological control-mechanisms by which we are fleeced and enthralled.

Resources and Suggestions for Activists and Researchers

On the Contrary is a public service of
Independent History and Research
Box 849, Coeur d'Alene, Idaho 83816 USA